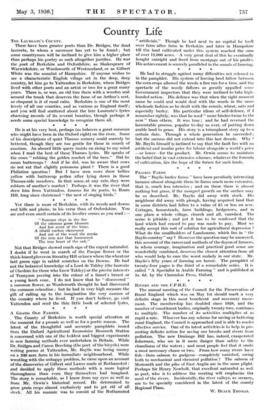 A GRAND : OLD FARMER. , The County of Berkshire is

worth special attention at the moment for a prosaic as well as for apoette reason. The latest of the thoughtful and accurate pamphlets issued from the Oxford Agricultural Economics Research Station is concerned with one of the boldest and biggest experiments in new farming methods ever undertaken in Britain. While Dr. Bridges and Canon Beeehing (the poet of the bicycle) were writing poems at Yattendon, Mr. Baylis was losing Money on a 240 acre farm in his immediate neighbourhood. While wrestling with the unhappy problem, he came upon an account of the discoveries of Gilbert and Lawes made at Rothamsted and decided to apply these methods with a more logical thoroughness than even they themselves had imagined. The story_ is remarkable, as I know from my eyes as well as from Mr. Orwin's historical record. He determined to grow grain crops almost exclusively and to get rid of all stock. All his manure was to consist of the Rothamsted

" artificials." Though he had next to no capital he took over farm after farm in Berkshire and later in Hampshire till the land cultivated under this system reached the sum of over 12,000 acres. A very great deal of this he eventually bought outright and freed from mortgage out of his profits. His achievement is scarcely paralleled in the annals of farming.