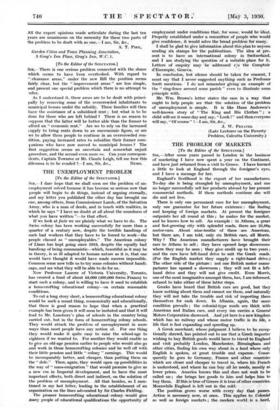 Sin,--I dare hope that we shall soon see the problem of tut- employment solved because it has become so serious now that people will begin to do things, instead of arguing eternally, and my letter you published the other day has brought me one, among others, from Commissioner Lamb, of the Salvation Army, who is a man of deeds, and in touch with realities, in which he says "I have no doubt at all about the soundness of what you have written,"—to that effect.

If we look at pets we see plainly what we have to do. The Swiss colony has been working successfully for more than a quarter of a century now, despite the terrible handicap of such bad workers that they have to be forced to work—the people classed as "unemployables." The American colony of Llano has kept going since 1913, despite the equally bad handicap of being communistic—which, beautiful as it may be in theory, is so ill adapted to human nature as it is, that one would have thought it would have made success impossible. Common sense now tells us to try some colonies without handi- caps, and see what they will be able to do for us.

Now Professor Laserre of Victoria University, Toronto, has created a fund of about £8,000 (200,000 Swiss Francs) to start such a colony, and is willing to have it used to establish a homccrofting educational colony—on certain reasonable conditions. - To cut a long story short, a homecrofting educational colony would be such a sound -thing, economically and educationally, that there is good reason to hope that when a practical example has been given it will soon be imitated and that it will lead to Mr. Lansbury's plan of schools in the country being carried out, but in the form of homecrofting colony schools. They would attack the problem of unemployment in more ways than most people have any notion of. For one thing they would make it quite easy to raise the school-age to eighteen if we wanted to. For another they would enable us to give an old-age pension earlier to people who would also go and work in those homecrofting colonies and be well off with their little pension and little " colony " earnings. This would be incomparably better, and cheaper, than putting them on the " dole." Then, again, they would open up possibilities in the way of mass-emigration" that would promise to give us a new era in Imperial development, and to have the most important effects, both direct and indirect, on the solution of the problem of unemployment. All that besides, as I men- tioned in my last letter, leading to the establishment of an organization on the lines advocated by Sir Charles Fielding.

employment under conditions that, for some, would be ideal. Properly established under a committee of people 'who would give. confidence, it would solve the bread Problem for many.

I shall be glad to give information about this plan to anyone sending six stamps for the publications. The idea at pre- sent is . to have an international colony in Switzerland, and I am studying the question of a Suitable place for it. Letters- of enquiry' May be addresSed • eici the Compton.

d'Escompte, Geneva. - In 'conclusion; lest silence should be taken for consent, I must say that -I never -suggested anything Such as Professor Seott mentions. ' I do' not remember 'giving an example- of the "ring-fence around some parish" even to illustrate some principle with.

Mr. Wm. Brown's letter states the case in a way that ought to help people see that -the solutiim of the problem of unemployment is simple. It is like -Hans Andersen's well-known story of "The King and His Clothes " ; a child will see it some day and say,- "Look !" and then everyone