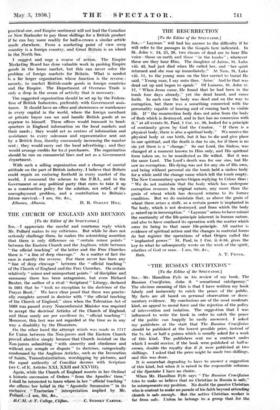 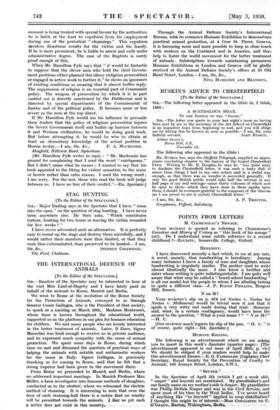 "THE RUSSIAN CRUCIFIXION " [To the Editor of the SPECTATOR.]

SIR,—Mr. Hamilton Fyfe in his review of my book, The Russian. Crucifixion, dubs it "sensational catchpenny."- The obvious meaning of this is that I have written my book falsely and insincerely to catch the pence of the public. My facts are all based on- personal observation or docu- mentary evidence. My conclusions are of the most moderate kind, an appeal to moral force and the rejection of the policy of -intervention and isolation. The suggestion that: I was influenced to write the book in order to catch the pence of the public can .happily be easily answered. I asked my publishers at the- start that The Russian Crucifixion should be published at the lowest possible price, instead of the 7s. 43d. or half a guinea which is usually asked for a work of this kind, The • publishers sent me a contract under which I would receive, if' the book were published at half-a- crown, double the royalty due if. jt were published at two shillings. I asked that the price might be made two shillings, and -this was done.

It is somewhat degrading .to have to answer a suggestion of this kind; but when it is raised in the responsible columns of the Spectator -I have no choice.

When- Mr. Hamilton Fyfe says "The Russian Crucifixion tries to make us believe that no Christian in Russia is safe," he misrepresents my position. No doubt the passive Christian who is content to make no parade of his faith beyond attending church- is safe-enough- But .the active Christian worker is far from safe. -Unless he belongs . to. a group that for the moment is being treated with special favour by the authorities, he is liable at the least to expulsion- froth his employment during one of the periodical eleansings." This expulsion involves disastrous results for the victim and his 'family. If he is more prominent, he is liable to arrest and exile under administrative degree. The case of the Baptists is surely proof enough of this.

Wheri Mr. Hamilton Fyfe says that "it would be fantastic to suppose that the clever men who hold the chief Govern- ment positions eithefplanned this idiocy (religious persecution) or engaged in-active work to further it," he'sheiws an ignorance of existing conditions so amazing that it almost baffles reply. The suppression of religion is an essential part of Coinmunist policy. The weapon of persecution by which it is in part carried out is directly sanctioned by the POlitbuteau and Is directed by special departments of the Commissariat of

Justice and of the political police. It becomes more of lest; -- •

severe as the men at the top direet.

If Mr. Hamilton Fyfe would use his influence to persuade these leaders that the policy of religious Persecution injures the Soviet Government itself and builds up barriers between it and Western civilization, he would be doing good work. But before attempting it, he would be wise to obtain at least an elementary knowledge of the actual position in Russia today.—I am, Sir, &c., F. A. MACKENZIE.

Mayfield, Hillcrest Road, Syden ham. - (Mr. Hamilton Fyfe writes in reply : " Mr. Mackenzie has ground for complaining that I used the word -catchpenny." But I didn't mean what he means ; I -wanted to say that his book appealed to the liking for violent sensation, to the sense or horror rather than calm reason. I used the wrong word ; I am sorry. For the rest, those who read the book will judge between us. I have no fear of their-verdict."—ED. Spectator;]