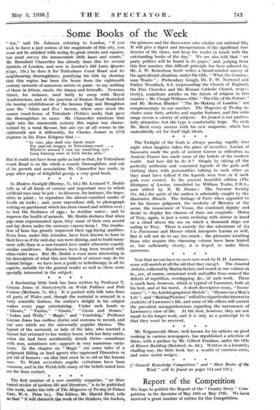 A fascinating little book has been written by Professor T.

Gwynn Jones of Aberystwyth on Welsh Folklore and Folk Custom (Methuen, 75. 6d.). It is packed with folk tales from

all 'parts Of Wales.: and though the material is arrayed in a truly scientific. fashion, the, author's delight in his subject makes every page entertaining. Under such heads as

"Ghosts," "Fairies," "Giants," "Caves and Stones," "Lakes and Wells," "Magic," and "Courtship," Professor Gwynn .Tories has endless stories and Customs to record, and one sees which are the universally popular themes. The legend of the mermaid, or lady of the lake, who married a farmer but returned to her watery home, with her fairy cattle, when she had been accidentally struck -thrice—sometimes with iron, sometimes not--appears in very numerous varia-

tions: - Iii the- clugOter "Magic ". are Tsorne tales of a judgment falling on land Agents who oppressed Dissenters or

got rid of farmers-an ideA that insist be is .old as the human race. To 'Welsh revivalists angelic visitations have been common, and in the Welsh hills many of the beliefs noted here are far from extinct.