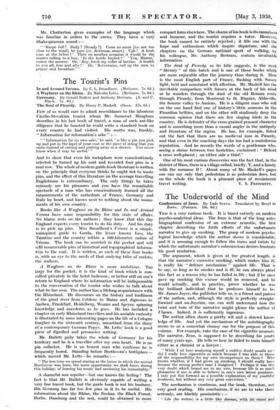 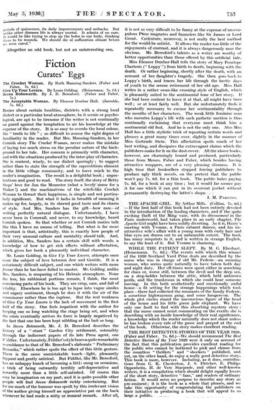 The Underworld of the Mind

Confessions of Zeno. By Italo Svevo. Translated by Beryl de Tins is a very curious book. It is based entirely on modern -psycho-analytical ideas: The form is that of the -long auto-

biographical confession of an extreme neurotic, the first • chapter - describing the futile efforts of the unfortunate

narrator to give up smoking. - The grasp of Modem. psycho:: logical knowledge which the author 'show s is considerable;

and it is amusing enough to follow the turns and twists by which the unfortunate narrator's subconscious desires frustrate his good resolution.

The argument, which is given at the greatest' length, is that the narrator's excessive -smoldng, Which Makes 'him ill, is really his "defence mechanism " against' life.' That is

to say, so long as he smokes and is ill, he can always plead this fact as a reason why he has failed in life ; but if he once gave up smoking this excuse would be removed, and he would actually, and in practice, prove whether he was the brilliant individual that he professes himself to be Mr. James Joyce, the publisher tells us, is a friend and patron of the author, and, although the style is perfectly straight- forward and un-Joycian, one can well understand how the twist and turn of the narrative might please the author of Ulysses. Indeed, it is 'sufficiently ingenious.

The author often shows a pretty, wit and a shrewd know- ledge of life. And yet the mechanism of the autobiography seems to us a somewhat clumsy one for 'the purpose of this volume. For example, take the ease of the -cigarette neurosis.

The narrator, Zeno, is supposed to be describing his youth of many years ago. He tells us how he failed to train himself either as a chemist or u lawyer :

"While I -sit hero. analyzing myself a sudden doubt assails me : did I really love cigarettes so much because I was able to throw all the responsibility for my own inconipetenOe on them I Who knows whether, if I -had given up. Smoking, I should really have become the strong perfect man I Imagined ? Perhaps' it was this

very doubt which bound me to vice, because life is so much pleasanter if one is able to believe in one's own' latent greatness. I only put this forward as a possible 'explanation of my youthful weakness, but without any, very great conviction."

The mechanism is cumbrous, and the book, therefore, not very good reading. His conclusions, if we are to take them

Life (he writes) is a:little. like .5.1i!et,!se., yrith. mt crises _and periods of .quiescence, its .daily improvements and setbacks. But unlike other diseases life is always mortal. It admits of no cure. t would be like trying to stop up the holes in our body, thinking them to be wounds. We should die of suffocation almost before we were cured."

Altogether an odd book, but not an uninteresting one.