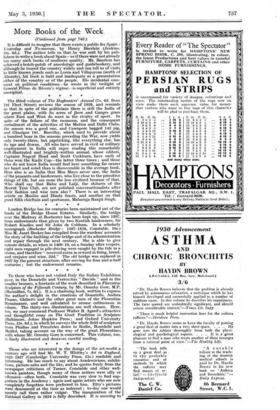 Page 35, 3 May 1930 — London Bridge has for, centuries been maintained out of the
Close

London Bridge has for, centuries been maintained out of the

funds of the Bridge 'House Estates. Similarly, the bridge over the Medway at Rochester has been kept up; since 1397, from endowments then given by two Kentish landowners, Sir Robert Knolles and Sir John de Cobham. In a scholarly monograph (Rochester Bridge : 1887-1856, Constable, 108.) Miss M. Janet Becker has compiled from the wardens' accounts the story of the building of the bridge and of its administration and repair through the next century. She is able to give minute details as when in 1409-10, on a Sunday after vespers, eight men engaged in pile-driving were caught by the tide in a storm, and therefore" received extra in reward in firing, bread, and verjuice and wine, 22d." The old bridge was replaced in 1887 by the present structure, after serving for four and a-half centuries ; but the endowment remains.