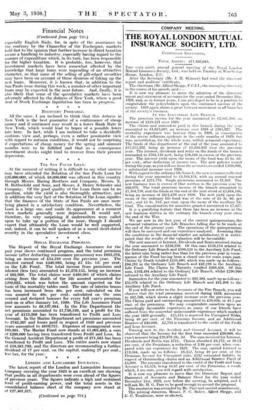 At the moment of writing it is difficult to say what success may have attended the flotation of the San Paulo Loan for £20,000,000, of which 18,000,000 was offered in this country through Messrs. Baring Brothers and Company, Messrs. N. M. Rothschild And Sons, and Messrs. J. Henry Schroder and Company. Or the good quality of the Loan there can be no question, while the yield is also thoroughly attractive, and in addition the very fact of the flotation of the Loan signifies that the finances of the State of San Paulo are once more being placed in a satisfactory condition. Nevertheless, the Loa is a large one, and made its appearance at a moment when markets generally • were depressed. It would not, therefore, be very surprising if underwriters were called upon to take up a portion of the issue, though I should expect that ultimately the Loan would be well supported, and, indeed, it can be well spoken of as a sound short-dated security in the speculative investment class.