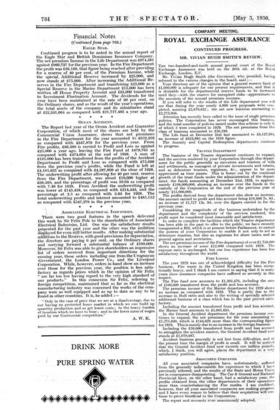 Continued progress is to be noted in the annual report of the Eagle Star and British Dominions Insurance Company. The net premium Income in the Life Department was £974,381 against £960,787 for the previous year. In the Fire Department the profit was £36,169, that figure being reached after providing for a resery.e of .40 per cent. of the Premium Income, while the special, Additional Reserve increased by £25,000, and now stands at 175,000. After increasing the Additional Re- serves in the' Fire Department and transferring £25,000 as a Special Reserve in the Marine -Department £15,000 has been written off House Property Account and 185,000 transferred to Investment Fluctuation Account. The dividends for the year have been maintained at the rate of 20 per cent. on the Ordinary shares, and as the result of the year's operations, the total assets of the company and its subsidiaries stand at 122,841,064 as compared with £21,717,403 a year ago.