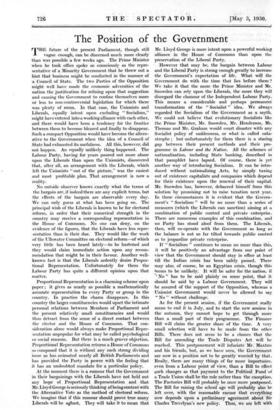 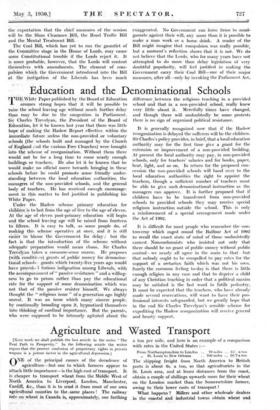 The Position of the Government 1111HE future of the present

Parliament, though still vague enough, can be discerned much more clearly than was possible 'a few weeks ago. The Prime Minister when he took office spoke so consciously as the repre- sentative of a Minority Government that he threw out a hint that business might be conducted in the manner of a Council Of State. The two Parties of the Opposition might well have made the economic adversities of the nation the justification for refining upon that suggestion and causing the Government to confine themselves more or less to non-controversial legislation for which there was plenty of room. In that case, the Unionists and Liberals, equally intent upon excluding "Socialism," might have entered into a working alliance with each other, and there would have been a tendency kir the frontier between them to become bleared and finally to disappear. Such a compact Opposition would have become the altern- ative to the Government when the idea of a Council of State had exhausted its usefulness. All this, however, did not happen. An equally unlikely thing happened. The Labour Party, having for years poured out more abuse upon the Liberals than upon the Unionists, discovered that, after all, an arrangement with the Liberals, which left the Unionists "out of the picture," was the easiest and most profitable plan. That arrangement is now a reality.

No outside observer knows exactly what the terms of the bargain are, if indeed there are any explicit terms, but the effects of the bargain are observable every day. Wc can only guess at what has been going on. The principal wish of the Liberals is known to be for electoral reform, in order that their numerical strength in the country may receive a corresponding representation in the House of Commons. No one can deny, on the evidence of the figures, that the Liberals have less repre- sentation than is their due. They would like the work of the Ullswater Committee on electoral reform—of which very little has been heard lately—to be hastened and they would claim immediate action upon any recom- mendation that might be in their favour. Another well- known fact is that the Liberals ardently desire Propor- tional Representation. Unfortunately for them• the Labour Party has quite a different opinion upon that matter.

Proportional Representation is a charming scheme upon paper ; it gives as nearly as possible a mathematically accurate representation to every Party or group in the country. In practice the charm disappears. In this country the larger constituencies would upset the intimate personal relations between Members of Parliament and the present relatively small constituencies and would thus detract from the sense of a direct contact between the elector and the House of Commons. That con- sideration alone would always make Proportional Repre- sentation unpopular for whit may be called Psychological or social reasons. But there is a much graver objection.

so composed that it is without any such strong dividing issue as has animated nearly all British Parliaments and has provided the Party in power with the feeling that it has an undoubted mandate for a particular policy.

At the moment there is a rumour that the Government in their barga- inings with the Liberals have not held out any hope of Proportional Representation and that Mr. Lloyd George is seriously thinking of being content with the Alternative Vote as the method of electoral reform. We imagine that if this rumour should prove true many Liberals will be aghast! They will take it to mean that Mr. Lloyd George is more intent upon a powerful working alliance in the House of Commons than upon the preservation of the Liberal Party.

However that may be, the bargain between Labour and the Liberal Party is strong enough greatly to increase the Government's expectation of life. What will the Government do with the time that lies before them ? We take it that the more the Prime Minister and Mr. Snowden can rely upon the -Liberals, the more they will disregard the clamour of the Independent Labour Party. This means a considerable and perhaps permanent transformation of the " Socialist " idea. We always regarded the Socialism of the Government as a myth. We could not believe that evolutionary Socialists like the Prime Minister, Mr. Snowden, Mr. Henderson, Mr. Thomas and Mr. Graham would court disaster with any Socialist policy of suddenness, or what is called cata- strophe; but unfortunately for them there is a staring gap between their present methods and their pro- gramme in Labour and the Nation. All the schemes of nationalization, including State banking, described in that pamphlet have lapsed. Of course, there is yet another way of introducing Socialism. It can be intro- duced without nationalizing Acts, by simply taxing out of existence capitalists and companies which depend for their existence upon the renewal of their capital. Mr. Snowden has, however, debarred himself from this solution by promising not to raise taxation next year. In these circumstances it is evident that the Govern- ment's " Socialism " will be no more than a series of measures (which the Liberals can sanction) aiming at a combination of public control and private enterprise. There are numerous examples of this combination, and no Party has stood aloof from them. The Liberals, then, will co-operate with the Government so long as the balance is not so far tilted towards public control as to jeopardize private enterprise.

If " Socialism " continues to mean no more than this, it will be positively an advantage from our point of view that the Government should stay in office at least till the Indian crisis has been safely passed. There may also, of course, be an Egyptian crisis, though this seems to be unlikely. It will be safer for the nation, if ' No " has to be said plainly on some point, that it should be said by a Labour Government. They will be assured of the support of the Opposition, whereas a Unionist Government would never be allowed to say " No " without challenge.

As for the present session, if the Government really mean to end it in July, and to start the new session in the autumn, they cannot hope to get through more than a small part of their programme. The Finance Bill will claim the greater share of the time. A very small selection will have to be made from the other Bills. There does not seem to be a chance that the Bill for amending the Trade Disputes Act will be reached. This postponement will infuriate Mr. Maxton and his friends, but, as we have seen, the -Government are now in a position not to be greatly worried by that. Really, there are many things of far more importance, even from a Labour point of view, than a B ill to effect such changes as that• payment to the Political Fund of a Trade Union shall be the rule rather than the exception. The Factories Bill will probably be once more postponed. The Bill for raising the school age will probably also be left , over, with the reasonable excuse that everything now depends upon a preliminary agreement about Sir Charles Trevelyan's new policy. Thus, we are left with the expectation that the chief measures of the session will be the Slum Clearance I3ill, the Road Traffic Bill and the Mental Treatment- Bill.

The Coal Bill, which has yet to run the gauntlet of the Committee stage in the House of Lords, may cause some Constitutional trouble if the Lords reject it. It is more probable, however,, that the Lords will content themselves with amendments. The element of com- pUlsion which the Government introduced into the Bill at the inatigation of the Liberals has been much exaggerated. No Government can force firms to amal- gamate against their will, any more than it is possible to make a man work or a horse drink. A reader of the Bill might imagine that compulsion was really possible, but a moment's_ reflection shows that it is not. We do not believe that the Lords, who for many years have not attempted to do more than delay legislation of very doubtful popularity, will feel justified in making the Government carry their Coal Bill—one of their major measures, after all—only by invoking the Parliament Act.