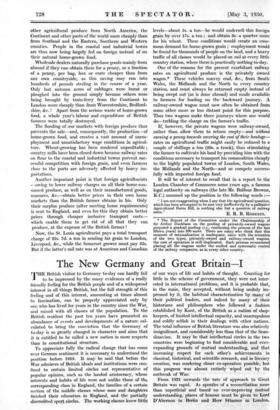 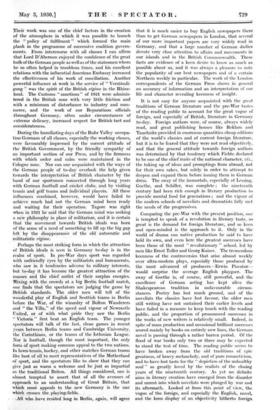 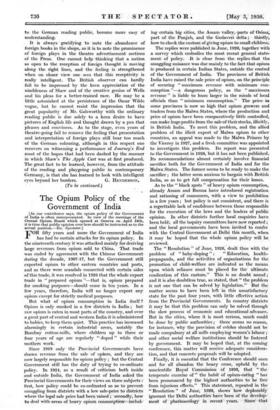 and Great Britain —I THE British visitor to Germany to-day can hardly fail to be impressed by the many evidences of a really friendly feeling for the British people and of a widespread interest in all things British, but the full strength of this feeling and of this interest, amounting at times almost to fascination, can be properly appreciated only by one who has lived for years in the country since the War, and mixed with all classes of the population. To the British resident the past ten years have presented an abundance of events and - developments of a nature cal- culated to bring the conviction that the Germany of to-day is so greatly changed in character and aims that. it is entitled to be called a new nation in more respects than in constitutional structure. • To appreciate fully the radical change that has come over German sentiment it is necessary to understand the position before 1918. It may be said that before the War admirers of British ideals and institutions were con- fined to certain limited circles not representative of popular opinion, such as the landed aristocracy, whose interests. and habits of life were not unlike those of the corresponding class in England, the families of a certain section of the middle classes whose sons and daughters finished their education in England, and the partially discredited sport circles. The working classes knew little of our ways of life and habits of thought. Counting for little in the scheme of government, they were not inter- ested in international problems, and it is probable that, in the main, they accepted, without being unduly im- pressed by it, the habitual characterization by many of their political leaders, and indeed by many of their historians and philosophers who followed a fashion established by Kant, of the British as a nation of shop- keepers, of limited intellectual capacity, and unscrupulous and coldly selfish in their dealings with other nations. The total influence of British literature was also relatively insignificant, and considerably less than that of the Scan- dinavian. It may be that intellectual circles in the two countries were beginning to find considerable and ever- expanding grounds of mutual understanding, and that increasing respect for each other's achievements in classical, historical, and scientific research, and in literary creation, was rendering closer co-operation possible, but this progress was almost entirely wiped out by the outbreak of War.

From 1921 onwards the rate of approach to Great Britain was rapid. As apostles of a reconciliation more than superficial and based on ever-improving mutual understanding, places of honour must be given to Lord D'Abernon in Berlin and Herr Sthamer in London. Their work" was one of. the ehief factors in the creation of the atmosphere in which it was possible to launch the `-`, policy of fulfilment" - which : formed the main plank in the programme of successive coalition govern- ments. From intercourse with all -classes I can affirm that Lord D'Abernon enjoyed the confidence of the great bulk of the German people as well as of the statesmen whom he -so often helped in troublous times, - and• his excellent relations with the influential American Embassy increased the effectiveness of his work Of conciliation; • Another powerful influence at work in. the service: of ",. Verstandi- gung " was the spirit of the British regime in the Rhine- land: The Customs ." sanctions " of 1921 were adminis- tered in the British zone with very little friction- and with a minimum of disturbance to industry and com- merce, -and the work of our Reparations officials • throughout. Germany, often under circumstances of extreme delicacy, increased respect for British tact and considerateness.

During the humiliating days Of the Ruhr Valley occupa- tion Gentians of all classes, especially the Working classes, were favourably impressed by the correct attitude of the British Government, by the friendly- sympathy of an important section of our Press, and by the firmness with is Order and Calm were maintained in the Cologne Zone: ' Nor can one acquainted with the ways of the German people Of to day overlook the help given towards the interpretation of • British character by the band Of our sportsmen connected through long Years with German football and cricket clubs and by Visiting tennis and *golf teams and individual players: All' these influences Combined, however, would have failed to achieve conch- had - not the Gentian. 'Mind been • ready and waiting for their operation; Tagore was right When in 10-21- he said that the German Mind was Seeking a neW philosophy m iilaeb Of mihtansm, and it is certain that the movement toWards. British ideals Was born of the sense of a need of something to fill up the big gap left- by the disappearance of the old" autocratic and militaristic regime. • • " Perhaps the most striking form in which the attraction of "British ideals is Seen in Germany to dayis in the _ realm Of 'sport. In pre-War days_ sport was regarded With -unfriendly .eyes by the Militarists and bureaucrats, who •SaW- in it tendencies adverse- to Military interests, , but to day if has become the greatest attraction of the Masses; and the chief outlet' of their surplus energies. Mixing With the crowds at a big ,Berlin !Vahan Match, one finds, that the spectators are judging the game by British -standards. The older men will tell of the :wonderful .play Of English and Scottish teams in Berlin before the War, of the wizardry Of Bolton Wanderers and" the Villa," of the speed and vigour of Newcastle United, Or of with what pride they saw the Berlin "Victoria" first beat an English team. The younger spectators will talk of the -fast, clean games in recent years between Berlin. teams and Cambridge. University, the Corinthians, or the teams of the Isthmian League. Nor is football, though the most important, the only form Of sport Making common appeal to, the two nations. In lawn-tenths, hockey, and other matches German teams like best- of all to meet representatives of the Motherland - of sport; and the spectators like- to. show that they can give just as warm a welcome and be. just as impartial as the traditional Briton. All things considered, one is almost tempted to assert • that -of all the avenues of :approach to an understanding of Great Britain, that which most ,appeals to the new Germany is the one which crosses the playing,fields. .

All who have resided long in Berlin, again, will agree that it is much easier to buy English newspapers there than to get German newspapers in London, that several of our more important papers are very widely read in Germany, and that a large number of German dailies _devote very close attention to affairs and movements in our islands and in the British Commonwealth: These facts are evidence of a keen desire to know as much as possible about us, and it was always a pleasure to note the popularity, of our best newspapers and of a certain Northern weekly in particular. The work of the London correspondents of the German Press shows in general an accuracy of information and an interpretation of our life and character revealing keenness of insight.

It is not easy for anyone acquainted with the great 'traditions 'of --German literature and the pre-War tastes of the reading public to account for the great vogue of fo- reign, and eSpeciallf of British, literature in Germany to-day. Foreign authors were, of course, always widely read, and great publishing 'houses like Reklam and Tauchnitz provided in enormous quantities cheap editions of the world's classics and of current foreign literature, but it is to he feared that they were not read objectively, and that the general attitude towards foreign authors was determined by that tendency which Fichte declared to be one of the chief traits of the national character, viz., the taking up of ideas and promptings from abroad, not for their own sakes, but solely in Order to attempt to deepen and expand them before issuing them in German dress. The sway of the immortals, especially of Lcssing, Goethe, and Schiller, was complete ; the nineteenth century had been rich enough in literary production to provide_ mental _food for generations ; and the vigour of the modern schools of novelists and dramatists fully met the needs of the progressives.

Comparing the pre-War with the present position, one is tempted to speak of a revolution in literary taste, so great is the demand for foreign literature, and so keen and open-minded is the approach to it. Only in the world of drama can native production be said to have held its own, and even here the greatest successes have been those of the most " revolutionary " school, led by men like Ernst Toiler and Georg Kaiser. The tremendous keenness of the controversies that arise almost weekly over ultra-modern plays, especially those produced by the most advanced of producers—Erwin Piscator- would surprise the average English playgoer. ..The sway of Goethe is, of course, still powerful, and._ the excellence of German acting has kept alive the Shakespearean tradition in unfavourable circum- stances. Poetry has lost much ground, and of the novelists the classics have lost favour, the older men still writing have not sustained their earlier levels and have failed in a measure to keep touch with the reading public, and the proportion of pronounced successes in the works of new writers is relatively small. Indeed, in spite of mass production and occasional brilliant successes scored mainly by books on entirely new lines, the German novel is passing through a rather barren period. Of the flood of war books only two or three may be expected to stand the test of time. The reading public seems to have broken away. from the old traditions of epic greatness, of heavy melancholy, and of pure romanticism, and to have lost taste for the " depiction of the unhealthy soul" so greatly loved by the realists of the closing years of the nineteenth century. As yet no definite aims in literary creation have emerged from the disorder and unrest into which novelists were plunged by .war and its aftermath. Looked at from this point of view, the vogue of the foreign, and especially the English, novel, and- the keen display of an objectivity hitherto foreign to the German reading public, become more easy of understanding.

• It is always- gratifying to note the abundance of foreign books in the shops, as it is to note the prominence of foreign plays in the theatre advertisement sections of the Press. One cannot help -thinking that a nation so open to the reception of foreign thought is moving along the right lines, and - the feeling is strengthened when on closer view one sees that -this- receptivity is really intelligent. The British observer can hardly fail to be impressed by the keen appreciation of the nimbleness of Shaw and of the creative genius of Wells and his pleas for a better-trained race. He may be a little astonished at the persistence of the Oscar Wilde vogue, but he cannot resist the impression that the great popularity of Mr. GaLsworthy with the ordinary reading public is due solely to a keen desire to have pictures of English life and thought drawn by a pen that pleases and convinces. As to the stage, even years of theatre-going fail to remove the feeling that presentation and interpretation of foreign plays still bear too much of the German colouring, although in this -respect one recovers on witnessing a performance of Journey's End most of the hopes that had been dashed by the manner in which Shaw's The Apple Cart was at first produced. The great fact to be learned, however, from the attitude of the reading and playgoing public in contemporary Germany, is that she has learned to look with intelligent eyes beyond her borders. G. HEignEasoN, (To be continued.)