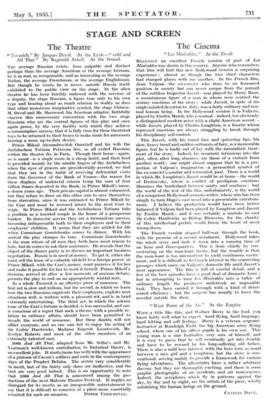 "Les Miserables." At the Tivoli

RECENTLY an excellent French version of part of Les Miserables was shown in this country. Anyone who remembers .that film will find this new Hollywood version a surprising experience : almost as though the two chief characters -had changed places with one another. In the French film, -Jean Valjean—the ex-convict who rises to an honoured 'position in society but can never escape from the pursuit of the ruthless Inspector Javert—was played by Harry Baur, a mountainous figure of a man in whom were centred the stormy emotions of the story ; while Javert, in spite of his single-minded devotion to duty, was a fairly ordinary and nor- mal human being. In the Hollywood version it is Valjean, played by Fredric March, who is normal—indeed, too obviously a distinguished modem actor with a slight American accent— while Javert, played by Charles Laughton, is a fanatic whose repressed emotions are always struggling to break through his disciplinary self-control. •

This Javert, with his round face and quivering lips, his slow, heavy tread and sudden outbursts of fury, is a memorable figure, but he is badly out of key with the naturalistic treat- ment of the story. Indeed, his recurrent intrusions into the plot, often after long absences, are those of a visitant from another world ; one might almost suppose that he is a pro- jection of Valjean's imagination—a personified symbol of the ex-convict's sombre and tormented past. There is a world in which Mr. Laughton's Javert would be at home—the world of Dostoevsky, where a conflict of prodigious emotions illumines the borderland between sanity and madness ; but the world of the rest of the film, unfortunately, is the world of a competent Hollywood scenario-writer, whose aim has been simply to turn Hugo's vast novel into a presentable entertain- ment. I believe the. production would have been better balanced if Valjean had been played by Laughton and Javert by Fredric March ; and it was certainly a mistake to cast Sir Cedric Hardwicke as Bishop Bienvenu, for the charity of this intellectual prelate would freeze the heart of most wrong-doers.

The French version stopped half-way through the book, with the promise of a second instalment. Hollywood takes the whole story and boils it down into a running time of an hour and three-quarters. This is done chiefly by con- centrating on the man-hunt theme, but the trouble is that the man-hunt is too intermittent to yield continuous excite- ment, and it is difficult to feel much interest in the connecting passages which carry on Valjean's domestic life until Javert's next appearance. The film is full of careful detail, and a few of the best episodes have a good deal of dramatic force ; but in attempting to turn Les Miserables into a talkie of ordinary length the producers undertook an impossible task: They have carried it through with a kind of deter- mined efficiency ; but the surgeon has usually to leave the

novelist outside the door. •

"West Point of the Air." At the Empire WITH a title like this, and Wallace Beery in the lead, you know fairly well what to expect—hard flying, hard language. hard hitting and soft feelings. Beery is a veteran sergeant- instructor at Randolph Field, the big American army flying school, where one of his officer pupils is his own 'son. This young man is a star footballer, very -sure of himself, and it is easy to guess that he will eventually get into trouble and have to be rescued by his long-suffering old father. There is also a mild love interest, with the hero torn as usual between a nice girl and a temptress, but the story is con, ventional, serving mainly to provide a framework for various flying adventures. The adventures have a rather arbitrary flavour, but they are thoroughly exciting, and there is some graphic photography of air accidents and air manoeuvres. Indeed, the aeroplanes which fly in patterns against the sky, by day and by night, arc the artists of the piece, wholly outshining the human beings on the ground.