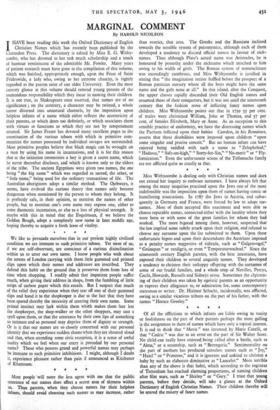 IHAVE been reading this week the Oxford Dictionary of English Christian Names which has recently been published by the Clarendon Press. The dictionary is edited by Miss E. G. Withy- combe, who has devoted to her task much scholarship and a touch of humour reminiscent of the admirable Mr. Fowler. Many years of patient research must have gone to the compilation of this volume, which was finished, appropriately enough, upon the Feast of Saint Frideswide, a lady who, owing to her extreme chastity, is rightly regarded as the patron saint of our older University. Even the most cursory glance at this volume should remind young parents of the tremendous responsibility which they incur in naming their children. It is not true, as Shakespeare once asserted, that names are of no significance ; on the contrary, a character may be twisted, a whole career diverted into unnatural channels, by the imposition upon helpless infants of a name which either reflects the eccentricity of their parents, or which dates too definitely, or which associates them with virtues or functions to which they are not by temperament attuned. Sir James Frazer has devoted many excellent pages to the examination of the various taboos with which in primitive com- munities the names possessed by individual savages are surrounded. Most primitive peoples believe that black magic can be wrought on a man by using his name in incantations, and it is for this reason that at the initiation ceremonies a boy is given a secret name, which he never thereafter discloses, and which is known only to the elders of the tribe. The ancient Egyptians were given two names, the one being "the big name" which was regarded as sacred, the other, or " little name," being used for the ordinary transactions of life. The Australian aboriginees adopt a similar method. The Ojebways, it seems, have evolved the curious theory that names only become dangerous when mentioned by the person to whom they belong. It is perfectly safe, in their opinion, to mention the names of other people, but to mention one's own name may expose one, either to some daemonic incantation, or else to a loss of physical strength. It maybe with this in mind that the Esquimaux, if we believe the Golden Bough, adopt a completely new name in later middle age, hoping thereby to acquire a fresh lease of vitality.

We like to persuade ourselves that in our present highly civilised condition we are immune to such primitive taboos. Yet most of us, if we are self-observant, are conscious of a curious disinclination within us to utter our own name. I know people who walk about the streets of London carrying with them little gummed and printed slips upon which their names and addresses are inscribed. They defend this habit on the ground that it preserves them from loss of time when shopping. I readily admit that impatient people suffer much, when giving their address in shops, from the fumbling of little strips of carbon paper which this entails. But I suspect that much of the relief they experience when they tear off one of their gummed slips and hand it to the shopkeeper is due to the fact that they have been spared thereby the necessity of uttering their own name. Some primal instinct may lurk within them which makes them fear lest the shopkeeper, the shop-walker or the other shoppers, may cast a spell upon them, or that the utterance by their own lips of something so intimate and so personal may deprive them of dignity or strength. Or is it that our names are so closely concerned with our personal identity that we experience sudden shamewhen they are shouted aloud and that, when attending some civic reception, it is a sense of awful nudity which we feel when our entry is preceded by our personal name? Those who possess grand and powerful names may perhaps be immune to such primitive inhibitions. I might, although I doubt it, experience pleasure rather than pain if announced as Kitchener of Khartoum.

* * * * Most people will none the less agree with me that the public utterance of our names does affect a secret area of shyness within us. Thus parents, when they choose names for their helpless infants, should avoid choosing such names as may increase, rather

than restrict, that area The Greeks and the Russians inclined towards the sensible system of patronymics, although each of them developed a tendency to discard official names in favour of nick- names. Thus although Plato's actual name was Aristocles, he is honoured by posterity under the nickname which attached to him owing to his width of girth. The Roman system of nomenclature was exceedingly cumbrous, and Miss Withycombe is justified in stating that " the imagination retires baffled before the prospect of a Roman patrician nursery where all the boys might have the same name and the girls none at all." In this island, after the Conquest, the upper classes rapidly discarded their Old English names and assumed those of their conquerors, but it was not until the nineteenth century that the fashion arose of inflicting fancy names upon children. Miss Withycombe points out that in 175o 55 per cent. of males were christened William, John or Thomas, and 57 per cent. of females Elizabeth, Mary or Anne. As an exception to this sensible practice of uniformity, we have the distressing names which the Puritans inflicted upon their babies. Camden, in his Remaines, asserts that these disabilities were imposed upon children " upon some singular and precise conceit." But no human infant can have enjoyed being saddled with such a name as " Zelophehad," " Hadassa," " Safe-on-high," " Sorry-for-Sin," " No-merit " or " Fly- fornication." Even the unfortunate scions of the Tollemache family are not afflicted quite so cruelly as that.

Miss Withycombe is dealing only with Christian names and does not extend her inquiry to embrace surnames. I have always felt that among the many iniquities practised upon the Jews one of the most indefensible was the imposition upon them of names having comic or humiliating associations. In 1787 the Jews in Austria, and subse- quently in Germany and France, were forced by law to adopt sur- names. Most of them accepted this enactment and were able to choose reputable names, connected either with the locality where they were born or with some of the great families for whom they had worked. The more bigoted among them, however, suspected that the law implied some subtle attack upon their religion, and refused to choose any surname upon the list submitted to them. Upon these unfortunate bigots and upon their descendants the Austrians imposed as a penalty names suggestive of ridicule, such as " Galgenvogel," " Griinspan " or verdigris, or even " Temperaturwechsel." Since the nineteenth century English parents, with the best intentions, have exposed their children to several ungainly names. They developed a tendency to christen their unhappy offspring with the surnames of some of our feudal families, and a whole crop of Nevilles, Percys, Cecils, Howards, Russells and Sidneys arose. Sometimes the christen- ing of their children was taken by egoistic parents as an opportunity to express their allegiance to, or admiration for, some contemporary statesman or writer. Dr. Hjalmar Schacht, incidentally, was afflicted, owing to a similar vicarious tribute on the part of his father, with the names " Horace Greeley."

* * * * Of all the afflictions to which infants are liable owing to vanity or foolishness on the part of their parents perhaps the most galling is the assignment to them of names which have only a topical interest. It is sad to think that " Mavis " was invented by Marie Corelli, or that " Cedric " was due to an error on the part of Sir Walter Scott. No child can really have enjoyed.heing called after a battle, such as " Alma," or a steamship, such as " Berengaria." Sentimentality on the part of mothers has produced senseless names such as " Joy," " Hazel " or " Primrose," and it is ignorant and unkind to christen a baby by such an elaborate diminutive as " Lancelot." More terrible than any of the above is that habit, which according to the registrar of Tottenham has reached alarming proportions, of naming children after film stars, such as " Shirley " or " Gary." I trust that young parents, before they decide, will take a glance at the Oxford Dictionary of English Christian Names. Their children thereby will be spared the misery of fancy names.