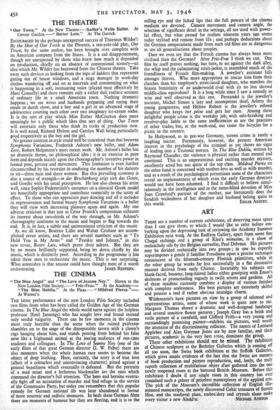 " The Blue Angel" and " The Love of Jeanne Ney." Shown to the New London Film Society. " Fric-Frac." At the AcademyThe Blue Dahlia." At the Plaza. "Mildred Pierce. At Warner's.

THE latest performance of the new London Film Society included two films from what has been called the Golden Age of the German cinema. In The Blue Angel the whole world turns against the helpless professor (Emil Jannings) who has sought love and found instead only sordid vulgarity. There can be few moments in the cinema more truly horrible than the scene when the ruined professor shambles on to the stage of the disreputable tavern with a clown's rags hanging about him, and stands peering from behind his false nose like a frightened animal at the jeering audience of one-time students and colleagues. In The Love of Yeanne Ney (one of the early films of that great German director G. W. Pabst) there are also moments when the whole human race seems to become the object of deep loathing. Here, certainly, the story is of true love (albeit of a colourless and unconvincing character) pitted against a general beastliness which eventually -is defeated. But the portraits of a mad miser and a lecherous blackmailer are the ones which command the director's full attention. The hero and heroine eventu- ally fight off an accusation of murder and find refuge in the service of the Communist Party, but today one remembers that this popular remedy for German national ills was later abandoned in favour of more neurotic and sadistic measures. In both these German films there are moments of humour but they are fleeting, and it is to the

rolling eye and the licked lips that the full powers' of the cinema medium are devoted. Camera movement and camera angle, the selection of significant detail in the settings, all are used with power- ful effect, but what passed for realism nineteen years ago seems today stylised and remote from life ; and perhaps deductions about the German temperament made from such old films are as dangerous as are all generalisations about peoples.

Dare we even say that the French cinema has always been more civilised than the German? After Fric-Frac I think we can. One film by itself proves nothing, but here, to set against the dark alley, the whip and the culminating strait-jacket, is assembled much of the friendliness of French film-making. A jeweller's assistant falls amongst thieves. Who more appropriate to rescue him from their clutches than, his employer's strait-laced daughter, who matches the brazen femininity of an underworld rival with its no less shrewd middle-class equivalent? It is a long while since I saw a comedy so wise and well observed as this one. Fernandel is the jeweller's assistant, Michel Simon a lazy and incompetent thief, Arletty the young gangsteress, and Helene Robert is the jeweller's refined daughter who keeps her poise and gets her man. Among these delightful people crime is the weekday job, with safe-breaking and revolver-play liable to the same inefficiencies as are the practices of other trades, but, at the week-end, out come the bicycles for a picnic in the country.

In Hollywood, as in pre-war Germany, screen crime is rarely a laughing matter. Fortunately, however, the present American interest in the psychology of the criminal as yet shows no signs of leading into a Teutonic morass. In The Blue Dahlia, written by Raymond Chandler, the violence is physical rather than mental and emotional. This is an unpretentious and exciting murder mystery, excellently acted but not quite of the top class. Mildred Pierce on the other hand is concerned with mother-love as well as with murder, and as a result of the psychological pretentions some of the characters reveal an unpleasantness of which even the early German directors would not have been ashamed. I find it difficult to believe simul- taneously in the intelligence and in the stone-blind devotion of Miss Joan Crawford's portrait of the mother, nor fortunately does the fiendish wickedness of her daughter and husband belong quite to