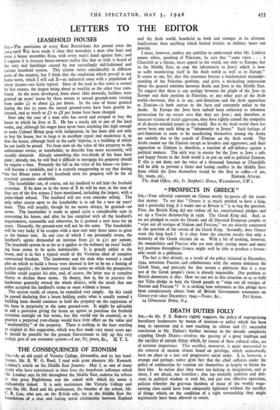 SIR,—The provisions of every Rent Restrictions Act passed since the 1914-1918 War have made it clear that nowadays a man who buys and owns a house resembles Esau, with every man's hand against him ; and I suppose it is because house-owners realise this that so little is heard of the very real hardships caused by our exceedingly old-fashioned and curious leasehold system. This system varies considerably in different parts of the country, but I think that the conditions which prevail in my home town, which I will call X—an industrial town with a population of about 50,000—are fairly typical. Most of the land in this town is owned by five estates, the largest being about as wealthy as the other four com- bined. As the town developed, from about x86o onwards, builders were granted 99 years' leases by these estates at annual ground-rents varying from under Li to about £4 per house. In the case of leases granted during the last 25 years the annual ground-rents have been greatly in- creased, and as much as £7 to £8 per house have been charged. Now take the case of a man who has saved and scraped to buy the house in which he lives at X. He has a steady job at one of the local works, and, although his wages have never been anything like high enough to make Colonel Blimp gasp with indignation, he has been able not only to buy his house, but to keep it in excellent repair and modernise it, so that the house, although built in the early 'eighties, is a building of which he can justly be proud. Yet from now on the value of this property to the unfortunate owner, or leaseholder, to describe him more accurately, will steadily diminish. Already something -like two-thirds of his lease have gone ; already, too, he will find it difficult to mortgage his property should he require a loan. Presently the fall in the value of his house—to him— will become a landslide, and it is scarcely exaggerating to say that during the last fifteen years of his leasehold term the property will be for ail practical purposes unsaleable.

The leaseholder can, of course, ask his landlord to sell him the freehold reversion. If he does so in the town of X he will be met, in the case of four out of the five estates I have mentioned, including the largest, with a point-blank refusal. The landlord will not even consider selling. The only other course open to the leaseholder is to ask for a new 99 years' lease. This will usually, though by no means always, be granted—on terms. The leaseholder is made to spend quite a considerable sum in renovating his house, and after he has complied with all the landlord's requirements, reasonable and otherwise, he is granted a new lease for 99 years. Naturally, the ground-rent will not be the same. The leaseholder will be very lucky if he escapes with a new rent only three times as great as the former rent. In one case of which I am personally aware, the landlord's agents demanded an increase from £z to £11 per annum. The leasehold system in so far as it applies to the ordinary 99 years' build- ing lease seems to be quite indefensible. It is grossly unfair to the lessee, and is in fact a typical result of the Victorian ideal of complete contractual freedom. The landowner and the man who wanted a small plot on which to build a house were deemed in law to be on a footing of perfect equality ; the landowner stated the terms on which the prospective builder could acquire his plot, and, of course, the latter was at complete liberty to decline those terms. In theory, that is, for in practice the landowner generally owned the whole district, with the result that one either accepted the landlord's terms or went without a house.

The system could, of course, be remedied very simply. An Adt could be passed declaring that a lessee holding under what is usually termed a building lease should continue to hold the property on the expiration of his lease in perpetuity at the same ground-rent. It might be advisable to add a provision giving the lessee an option to purchase the freehold reversion outright on fair terms, but this would not be essential, as in practice a perpetual rent-charge would have little effect on the value and " marketability" of the property. There is nothing in the least startling or original in this suggestion, which was first made very many years ago. It should be possible for the present Government to tidy up this very archaic part of our economic system—I am, Sir, yours, &c.,