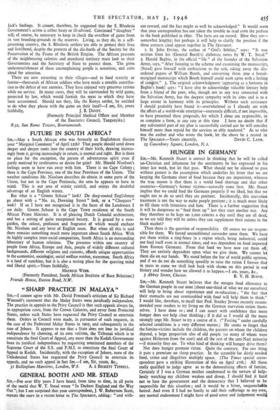 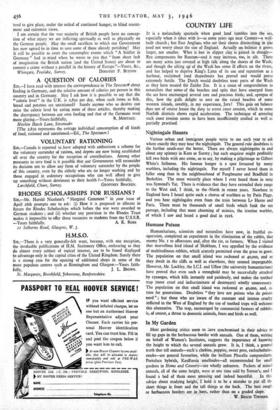 Page 15, 3 May 1946 — StR,—Mr. Kenneth Stuart believes that the meagre food allowance to
Close

StR,—Mr. Kenneth Stuart believes that the meagre food allowance to

the German people in our zone (about one-third of what we eat ourselves) will help to bring about repentance and re-education ; " the fact that their stomachs are not overtroubled with food will help them to think." I would like, therefore, to recall that Prof. Stanley Jevons recently recom- mended your readers to try living on the German starvation ration them- selves. I have done so ; and I can assert with confidence that mere hunger does not help clear thinking ; if it did so I would all the more strongly urge Mr. Stuart to try a course of it. (" Fasting " under carefully selected conditions is a very different matter.) He seems to forget that the famine-victims include the children, the parents on whom the children depend, a large proportion also of old people (so many of whom were against Hitlerism from the start) and all the rest of the anti-Nazi minority —if minority they are. To what kind of thinking will hunger drive them?

Nor does hunger promote virtue. Quite the contrary. For one thing it puts a premium on sharp practice. In the scramble for direly needed food, crime and illegalities multiply apace. (The Times special corre- spondent gave a striking illustration of this on April 27th.) All those really qualified to judge agree as to the demoralising effects of famine. Certainly if I was a German mother condemned to the torture of help- lessly watching my children weaken and droop, I should find it hard not to hate the government and the democracy that I believed to be responsible for this situation ; and it would be a bitter, unquenchable hatred. And even if I had no family to add their sufferings to my own, any normal endowment I might have of good sense and judgement would tend to give place, under the ordeal of continued hunger, to blind resent- ment and extremist views.

I am certain that the vast majority of British people have no concep- tion of what injury we are inflicting spiritually as well as physically on the German people. May the small sacrifices to which our Government has now agreed be in time to save some of those already perishing! May it still be possible to avert the catastrophic events which " A Soldier in Germany " had in mind when he wrote to you that " from sheer lack of imagination the British nation (and the United States) are about to commit a crime without a parallel in the history of Europe."—Yours, &c.,