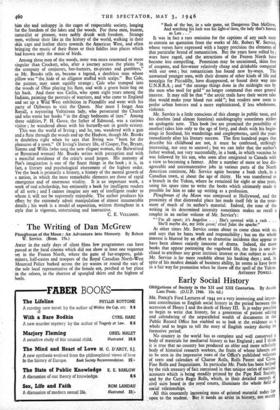 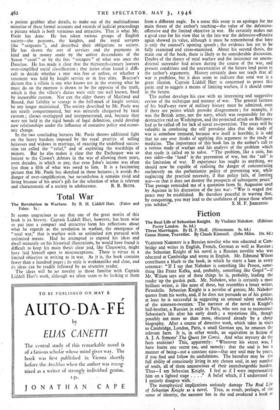 Obligations of Society in the XII and XIII Centuries. By Austin Lane Poole. (O.U.P. 1946. 10s. 6d.) MR. POOLE'S Ford Lectures of 1944 are a very interesting and impor- tant contribution to English social history in the period between the accession of Henry I and the death of Henry III. It is today possible to begin to write that history, for a generation of patient editing and calendaring of the unparalleled wealth of documents in the Public Record Office has enabled us to look at the evidence as a whole and to begin to tell the story of English society during its formative period. No country in the world has as complete and well conserved a body of materials for mediaeval history as has England ; and I think it is true that no country has produced an abler and more scholarly body of historical research workers, the fruits of whose labours are to be seen in the impressive rows of the Office's published volumes of texts and calendars of Charter Rolls, Rolls Patent and Close, Fine Rolls and Inquisitions. In particular Mr. Poole has been helped by the rich treasury of fact contained in that unique series of national accounts which is being steadily printed by the Pipe Roll Society, and by the Curia Regis Rolls, which, in their detailed records ot, civil suits heard in the royal courts, illuminate the whole field of social relationships. All this constantly increasing mass of printed material today lies open to the student. But it needs an artist in history, not merely a patient grubber after details, to make out of the multitudinous minutiae of these formal accounts and records of judicial proceedings a picture which is both veracious and attractive. That is what Mr. Poole has done. He has taken various groups of English society—the peasants, the knights, and the royal servants (the " sergeants "), and described their obligations to society. He has shown the sort of services and the payments in kind and in money made ny the unfree descendants of the Saxon " ceorl " or by the fret " socagers " of what was once the Danelaw. He has made it clear that the thirieenth-century lawyers over-simplified social classification ; that juries often found it diffi- cult to decide whether a mar was free or unfree, or whether a tenement was held by knight service or in free alms. Bracton's dictum that a villein is one who knows not in the evening what he must do on the morrow is shown to be the opposite of the truth, which is that the villein's duties were only too well known, fixed by inexorable custom. Nor can the older theory of Maitland and Round, that liability to scutage is the hall-mark of knight service, be any longer maintained. The society described by Mr. Poole was not neatly compartmented, but was minutely chequered by local custom ; classes overlapped and interpenetrated, and, because they were not held in the rigid bonds of legal definition, could develop new relationships under the influence of executive policy and econo- mic change.

In the two concluding lectures Mr. Poole throws additional light on the heavy burdens imposed by the royal practice of selling heiresses and widows in marriage, of exacting the undefined succes- sion tax called the " relief," and of exploiting the wardships of minors. But he also makes it clear that the Exchequer was so lenient to the Crown's debtors in the way of allowing them years, even decades, in which to pay, that even John's income was often less than a fifth of what was owed to him. It is a fascinating picture that Mr. Poole has sketched in these lectures ; it avoids the danger of over-simplification, but nevertheless it remains vivid and living because of his artist's gift for the selection of what is relevant and characteristic of a society in adolescence. R. R. BETTS.