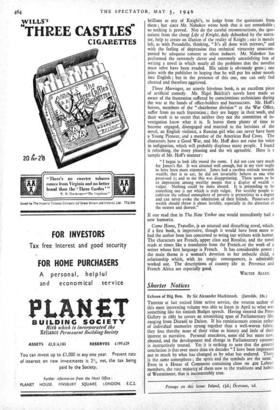 Echoes of Big Ben. By Sir Alexander Mackintosh. (Jarrolds. 18s.) THOUGH at last retired frbm active service, the veteran author of this most interesting volume was able to listen in April to what was something like his sixtieth Budget speech. Having entered the Press Gallery in 1881 he covers an astonishing span of Parliamentary life. ranging from Disraeli to Dalton. If his reminiscences consist rather of individual memories strung together than a well-woven fabric. they lose thereby none of their value as history and little of their interest as narrative. Personal anecdotes, some old but more new. abound, and the development and change in Parliamentary customs is instructively treated. Yet it is striking to note that the general conclusion is that over more than six decades " I have been impressed not so much by what has changed as by what has endured. There is the same atmosphere ; the spirit and the symbols are the same.- Even in a House of Commons containing close on 40o Labour members, the vast majority of them new to the traditions and habits of Westminster, that is incontestably true.