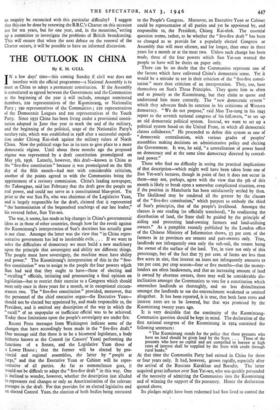 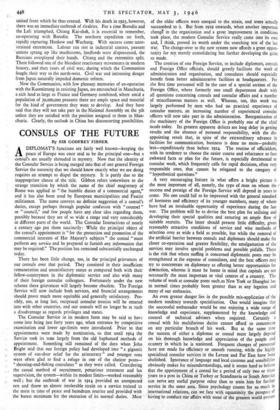 THE OUTLOOK IN CHINA

N a few days' time—this coming Sunday if civil war does not I interfere with the official programme—a National Assembly is to meet in China to adopt a permanent constitution. If the Assembly is constituted as agreed between the Government and the Communists at the beginning of the year it will include, amongst nominated inembers, 220 representatives of the Kuomintang, or Nationalist Party ; 190 representatives of the Communists ; 120 representatives of the Democratic Leagues and too representatives of the Youth Party. Since 1931 China has been living under a provisional consti- tution adopted in June that year to mark the end of the military, and the beginning of the political, stage of the Nationalist Party's tutelary rule, which was established in 1928 after a successful expedi- tion under Chiang Kai-shek against the military rulers of North China. Now the political stage has in its turn to give place to a more democratic regime. Until about three months ago the proposed regime was represented by a draft constitution promulgated on May 5th, 1936. Latterly, however, this draft—known in China as the " five-five constitution " because it was promulgated on the fifth day of the fifth month—had met with considerable criticism, another of the points agreed to with the Communists being the appointment of a revisory commission. China's leading newspaper, the Takungpao, said last February that the draft gave the people no real power, and could' not serve as a constitutional blue-print. Yet prior to the war Sun Fo, who was chairman of the Legislative Yuan, and is largely responsible for the draft, claimed that it represented " the harmonisation of the bequeathed teachings of our late leader," his revered father, Sun Yat-sen.

The war, it seems, has made as big changes in China's governmental ideas as in those of other countries, though how far the revolt against the Kuomintang's interpretation of Sun's doctrines has actually gone is not clear. Amongst the latter was the view that " in China repre- sentative government has led to intolerable evils.. . . If we want to solve the difficulties of democracy we must build a new machinery upon the principle that sovereignty and ability are different things. The people must have sovereignty, the machine must have ability and power." The Kuomintang's interpretation of this in the " five- five constitution" was to assign to the people the four powers which Sun had said that they ought to have—those of electing and " recalling " officials, initiating and pronouncing a final opinion on legislation—but to restrict their exercise to a Congress which should meet only once in three years for a month, or in exceptional circum- stances two. The " five-five constitution " provided, moreover, that the personnel of the chief executive organ—the Executive Yuan— should not be elected but appointed by, and made responsible to, the President, and it omitted any description of the way in which the " recall " of an unpopular or inefficient official was to be achieved. Today these limitations upon the people's sovereignty are under fire.

Recent Press messages from Washington indicate some of the changes that have accordingly been made in the " five-five draft." One message said that there is to be a bicameral legislature, a body hitherto known as the Control (or Censors' Yuan) performing the functions of a Senate, and the Legislative Yuan those of a Lower House ; that the former will be elected by pro- vincial and regional assemblies, the latter by " people at large," and that the Executive Yuan or Cabinet will be repre- sentative of all parties. As far as nomenclature goes, it would not be difficult to adapt the " five-five draft " in this way. One is inclined to wonder, however, whether the description just alluded to represents real changes or only an Americanisation of the relevant Passages in the draft. For that provides for an elected legislative and an elected Control Yuan, the election of both bodies being entrusted to the People's Congress. Moreover, an Executive Yuan or Cabinet could be representative of all parties and yet be appointed by, and responsible to, the President, Chiang Kai-shek. The essential question seems, rather, to be whether the " five-five draft " has been so changed as to provide for a popularly elected Congress or Assembly that will meet oftener, and for longer, than once in three years for a month or at the most two. Unless such change has been made, three of the four powers which Sun Yat-sen wanted the people to have will be theirs on paper only.

There can be no doubt that the Communists represent one of the factors which have enlivened China's democratic sense. Yet it would be a mistake to see in their criticism of the " five-five consti- tution " more than criticism of an interpretation. They, too, base themselves on Sun's Three Principles. They quote him as often and as piously as the Kuomintang, but they claim to quote and understand him more correctly. The " new democratic system " which they advocate finds its sanction in his criticisms of Western democracy. " We do not propose," said Mao Tse-tung in his 1945 report to the seventh national congress of his followers, " to set up an old democratic political system. Instead, we want to set up a political system based on the United Front, in which all democratic classes collaborate." He proceeded to define this system as one of " democratic centralisation, with various grades of peoples' assemblies making decisions on administrative policy and electing the Government. It was, he said, " a centralisation of power based on democracy and at the same time democracy directed by central- ised power."

Those who find no difficulty in seeing the practical implications of that description—which might well have been taken from one of Sun Yat-sen's lectures, though in point of fact it does not occur in them—may not, perhaps, agree with the view that the 5th of this month is likely to break upon a somewhat complicated situation, even if the position in Manchuria has been satisfactorily settled by then. The likelihood may be rendered all the greater by the clauses of the " five-five constitution," which purport to embody the third of Sun's principles, that of the people's livelihood. Amongst the clauses is one reading (as officially translated), " In readjusting the distribution of land, the State shall be guided by the principle of aiding and protecting land-owning farmers and land-utilising owners." As a pamphlet recently published by the London office of the Chinese Ministry of Information shows, 53 per cent. of the farmers in 22 provinces are tenants and part-owners only. True, landlords not infrequently own only the sub-soil, the tenant being the owner of the surface of the land. Yet, in view not only of this percentage, but of the fact that 75 per cent. of farms are less than five acres in size, that interest on loans not infrequently amounts to too per cent. per crop season—four or five months—that the money- lenders are often landowners, and that an increasing amount of land is owned by absentee owners, there may well be considerable dis- inclination amongst the Communists to vote for a constitution which entrenches landlords so thoroughly, and no less disinclination amongst the landlords to see the entrenchment weakened or omitted altogether. It has been reported, it is true, that both farm rents and

interest rates are to be lowered, but that was promised by the Kuomintang twenty years ago.

It is very desirable that the continuity of the Kuomintang- Communist question should be kept in mind. The declaration of the first national congress of the Kuomintang in 1924 contained the following sentences:

At that time the Communist Party had existed in China for three or four years only. It had, however, grown rapidly, especially after the arrival of the Russians Karakhan and Borodin. The latter acquired great influence over Sun Yat-sen, who was quickly persuaded of the necessity of admitting the Communists into the Kuomintang and of winning the support of the peasantry. Hence the declaration quoted above.

Its pledges might have been redeemed had Sun lived to control the united front which he thus created. With his death in 1925, however, there was an immediate outbreak of rivalries. For a time Borodin and the Left triumphed, Chiang Kai-shek, it is essential to remember, co-operating with Borodin. The northern expedition set forth, rapidly capturing Hankow and Wuchang. With success came unre- strained extremism. Labour ran riot in industrial centres, peasant unions sprang up like mushrooms, landlords were dispossessed, the Russians overplayed their hands. Chiang and the extremists split. There followed one of the bloodiest reactionary movements in modern history, and then years of civil war, during which the Communists fought their way to the north-west. Civil war and increasing danger from Japan naturally impeded domestic reform.

Now the Communists, with few pleasant memories of co-operation with the Kuomintang in resisting Japan, are entrenched in Manchuria, a rich land as large as France and Germany combined, where amid a population of 30,000,000 peasants there are ample space and material for the kind of government they want to develop. And they have said that they will not take part in the National Assembly on the 5th unless they are satisfied with the position assigned to them in Man- churia. Clearly, the outlook in China has disconcerting possibilities.