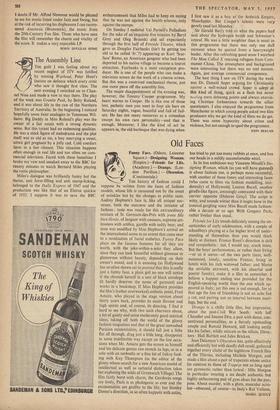 THE history of fashion could I suppose be written from the faces of fashion models, whose life is measured not by the onset of wrinkles but by the changes in public taste. Audrey Hepburn's face is, like all unique suc- cesses, both the outcome and the initiator of fashion : taste was ready for this extraordinary mixture of St. Germain-des-Pres with jeune frlle bien elevie, of languor with cosiness, supreme art- lessness with artifice, gazelle with teddy bear; and taste was modified by Miss Hepburn's arrival on the international scene to an extent that came near to a revaluation of facial esthetics. Funny Face plays on the famous features for all they are worth, with the joke-within-a-joke they allow, since they can look beautiful without glamour or glamorous without beauty, depending on their owner's mood, and it is amusing (as Hollywood has so often shown us) to pretend that this is really just a funny face, a plain girl no one will notice if she shrouds herself in a sort of black envelope (it hardly deserves the name of garment) and works in a bookshop. If Miss Hepburn provides the film's (rather overworked) esthetic point, Fred Astaire, who played in the stage version about thirty years back, provides its main flavour and high spirits and, of course, its dancing. I find it hard to see why, with two such charmers about, a lot of gaiety and some moderately good satirical ideas, taking off both the world of the glossy fashion magazines and that of the great unwashed Parisian existentialists, it should fall just a little flat all through, drag just a little long, disappoint in some indefinable way except on the few occa- sions when Mr. Astaire gets the screen to himself and his delicate genius can stretch its legs, as in a solo with an umbrella or a fine bit of folksy fool- ing with Kay Thompson (as the editor of the glossy whose search for a new American model of intellectual as well as sartorial distinction takes her exploring the wilds of Greenwich Village). The film fairly burst with charm, the Gershwin songs are lively, Paris is as photogenic as ever and the existentialists are grubby to the life; but Stanley Donen's direction, as so often happens with satire,

has tried to pot too many rabbits at once, and has our heads in a mildly uncomfortable whirl.

In its less ambitious way Vincente Minelli's De- signing Woman, which (as you will have guessed) is about fashion too, is perhaps more successful, with another of those funny and interesting faces (who came to films via fashion modelling, inci- dentally) of Hollywodd, Lauren Bacall, another giraffe-like figure, amusingly contrasted with their curvier opposite (Dolores Gray). The script is witty, and sounds wittier than it might have in the ironical gargling voice Miss Bacall made fashion- able a decade or so ago. With Gregory Peck, rather livelier than usual.

Friends for Life treads delicately among the un- certainties of early adolescence, with a couple of schoolboys playing at a far higher level of under- standing of themselves than you would think likely at thirteen. Franco Rossi's direction is deft and sympathetic : not, I would say, much more. But the boys' performances, or rather their living —or so it seems—of the two parts (neat, well- mannered, lonely, sensitive Franco, living in hotels with his rich widowed father; and Mario the enviable extrovert, with his cheerful and poorer family), make it a film to remember. I believe a happier ending was provided for the English-speaking world than the one which ap- peared in Italy; yet this one is sad enough, for at that age the loss of friendship is not an ache but a cut, and parting not an interval between meet- ings, but the end.

Drango is a chilly little film, but impressive, about the post-Civil War South : with Jeff Chandler and Joanne Dru, a pair with dense, con- centrated personalities, as a fiercely upstanding couple and Ronald Howard, still looking eerily like his father, wildly miscast as the villain. Direc- tors: Hall Bartlett and Jules Bricken.

Jean Delannoy's Obsession has, quite effectively and efficiently but with deadly dull result, gathered together every cliche of the highbrow French film of the Thirties, including Michele Morgan, and made a film about a pair of trapezists whose antics (in contrast to those of Trapeze not so long ago) are gymnastic rather than lyrical : Mlle Morgan in particular wearing a no doubt authentic but highly unbecoming pair of gym shoes for the pur- pose. About murder, with a glum, muscular acro- bat—obsessed, of course—in Italy's Raf Vallone.