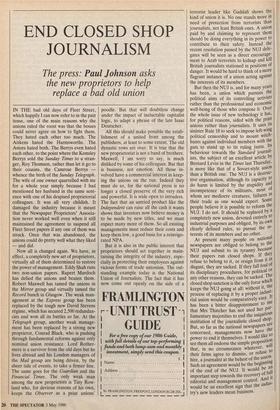 the new proprietors to help replace a bad old union

IN THE bad old days of Fleet Street, which happily I can now refer to in the past tense, one of the main reasons why the unions ruled the roost was that the bosses could never agree on how to fight them. They hated each other too much. The Aitkens hated the Harmsworths. The Astors hated both. The Berrys even hated each other, to the point where the Kemsley Berrys sold the Sunday Times to a stran- ger, Roy Thomson, rather than let it go to their cousins, the Camrose Berrys — whence the birth of the Sunday Telegraph. The wife of one owner quarrelled with me for a whole year simply because I had mentioned her husband in the same sent- ence with one of his despised proprietorial colleagues. It was all very childish. It damaged the industry because it meant that the Newspaper Proprietors' Associa- tion never worked well even when it still maintained the agreement to suspend all Fleet Street papers if any one of them was struck. Once that was abandoned, the unions could do pretty well what they liked — and did.

Now all is changed again. We have, in effect, a completely new set of proprietors, virtually all of them determined to restore the power of management. Eddy Shah runs two non-union papers. Rupert Murdoch has defied the unions and beaten them. Robert Maxwell has tamed the unions in the Mirror group and virtually tamed the Record bunch in Glasgow. The weak man- agement at the Express group has been replaced by the tough new David Stevens regime, which has secured 2,500 redundan- cies and won all its battles so far. At the Telegraph group, another weak manage- ment has been replaced by a strong new proprietor, Conrad Black, who is pushing through fundamental reforms against only nominal union resistance. Lord Rother- mere is a survivor from the old days but he lives abroad and his London managers of the Mail group are being driven, by the sheer tide of events, to take a firmer line. The same goes for the Guardian and the Financial Times. The only weak man among the new proprietors is Tiny Row- land who, for devious reasons of his own, keeps the Observer as a print unions'

poodle. But that will doubtless change under the impact of ineluctable capitalist logic, to adapt a phrase of the late Isaac Deutscher.

All this should make possible the estab- lishment of a united front among the publishers, at least to some extent. The old dynastic rows are over. It is true that the new proprietoriat is not a band of brothers. Maxwell, I am sorry to say, is much disliked by some of his colleagues. But that is business, not emotion. All those in- volved have a commercial interest in keep- ing the unions on the run. Indeed they must do so, for the national press is no longer a closed preserve of the very rich and powerful. It is wide open to intruders. The fact that an untried product like the Independent can raise all the cash it wants shows that investors now believe money is to be made by new titles, and we must expect many more of them. So all existing managements must reduce their costs and keep them low, a good basis for a reinvigo- rated NPA.

But it is also in the public interest that proprietors should act together in main- taining the integrity of the industry, espe- cially in protecting their employees against vicious forms of trade unionism. The out- standing example today is the National Union of Journalists. The fact that it has now come out openly on the side of a

terrorist leader like Gaddafi shows the kind of union it is. No one stands more in need of protection from terrorists than journalists, not least British ones. A union paid by and claiming to represent them should be doing everything in its power to contribute to their safety. Instead the recent resolution passed by the NUJ dele- gates will be seen as a direct encourage- ment to Arab terrorists to kidnap and kill British journalists stationed in positions of danger. It would be hard to think of a more flagrant instance of a union acting against the interests of its members.

But then the NUJ is, and for many years has been, a union which pursues the political aims of its controlling activists rather than the professional and economic well-being of those who compose it. Over the whole issue of new technology it has, for political reasons, sided with the print unions rather than journalists. It uses its sinister Rule 18 to seek to impose left-wing political censorship and to mount witch- hunts against individual members with the guts to stand up to its ruling junta. Its behaviour towards the Standard journal- ists, the subject of an excellent article by Bernard Levin in the Times last Thursday, is more like that of a Soviet-style union than a British one. The NUJ is a destruc- tive organisation, although its capacity to do harm is limited by the stupidity and incompetence of its militants, most of whom are mediocre creatures, failures in their trade as one would expect. Some people believe it is possible to reform the NUJ. I do not. It should be replaced by a completely new union, devoted entirely to industrial purposes and obliged, by its own clearly defined rules, to pursue the in- terests of its members and no other. At present many people on national newspapers are obliged to belong to the NUJ and submit to its tyranny because their papers run closed shops. If they refuse to belong to it, or resign from it disgust, they are sacked. If they fall foul of its disciplinary procedures, for political or any other reasons, they can be sacked. T.he closed shop sanction is the only force which keeps the NUJ going at all: without it, the process of replacing it by a proper indust- rial union would be comparatively easy. has been a bitter disappointment to ine that Mrs Thatcher has not used her .par- liamentary majorities to end the iniquitous institution of the journalistic closed shop. But, so far as the national newspapers are concerned, managements now have the power to end it themselves. I would like. to see them all endorse the simple propositio..n. that, in no circumstance whatever, will their firms agree to dismiss, or refuse to hire, a journalist at the behest of the unio. n. Such an agreement would be the beginning of the end of the NUJ. It would be all important step towards the recovery of fu1ht editorial and management control. And would be an excellent sign that the IndUS- try's new leaders mean business.