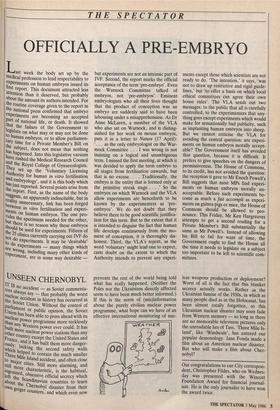 Last week the body set up by the medical profession to lend respectability to experiments on human embryos issued its first report. This document attracted less attention than it deserved, but probably about the amount its authors intended. For the routine coverage given to the report in the national press confirmed that embryo experiments are becoming an accepted Part of national life, or death. It showed that the failure of the Government to legislate on what may or may not be done to human embryos, or to allow parliamen- tary time for a Private Member's Bill on the subject, does not mean that nothing has happened. Into this legislative vacuum have rushed the Medical Research Council and the Royal College of Gynaecologists. They set up the 'Voluntary Licensing Authority for human in vitro fertilisation and embryology', and it is this body which has just reported. Several points arise from the report. First, as the name of the body suggests, an apparently indissoluble, but in reality unnecessary, link has been forged between in vitro fertilisation and expen- rh,ents on human embryos. The one pro- vides the specimens needed for the other, but there is no reason why these embryos should be used for experiments. Fifteen of the 25 clinics currently carrying out IVF do not do experiments. It may be 'desirable' to do experiments — many things which are wrong, including many other kinds of experiment, are in some way desirable _ but experiments are not an intrinsic part of IVF. Second, the report marks the official acceptance of the term 'pre-embryo'. Even the Warnock Committee talked of embryos, not 'pre-embryos'. Eminent embryologists who all their lives thought that the product of conception was an embryo are suddenly said to have been labouring under a misapprehension. As Dr Anne McLaren, a member of the VLA who also sat on Warnock, and is disting- uished for her work on mouse embryos, puts it in a letter to Nature (17 April): . . as the only embryologist on the War- mock Committee . . . I was wrong in not insisting on a logical and unambiguous term. I missed the first meeting, at which it was decided to apply the term embryo to all stages from fertilisation onwards, but that is no excuse. . . . Traditionally, the embryo is the entity that is formed only at the primitive streak stage . . . .' So the embryos on which Warnock and the VLA allow experiments are henceforth to be known by the experimenters as 'pre- embryos'. We do not doubt that they believe there to be good scientific justifica- tion for this term. But to the extent that it is intended to disguise the fact that human life develops continuously from the mo- ment of conception, it is thoroughly dis- honest. Third, the VLA's report, as the word 'voluntary' might lead one to expect, casts doubt on the extent to which the Authority intends to prevent any experi- ments except those which scientists are not ready to do. 'The intention,' it says, 'was not to draw up restrictive and rigid guide- lines,' but `to offer a basis on which local ethical committees can agree their own house rules'. The VLA sends out two messages: to the public that all is carefully controlled, to the experimenters that any- thing goes except experiments which would make for sensationally bad publicity, such as implanting human embryos into sheep. But we cannot criticise the VLA for avoiding the central question: are experi- ments on human embryos morally accept- able? The Government itself has avoided that question, because it is difficult. It prefers to give speeches on the dangers of permissiveness. The House of Commons, to its credit, has not avoided the question: the reception it gave to Mr Enoch Powell's Bill suggests that most MPs find experi- ments on human embryos morally un- acceptable. Before such experiments be- come as much a fait accompli as experi- ments on guinea pigs or mice, the House of Commons should be allowed to pro- nounce. This Friday, Mr Ken Hargreaves attempts to get a second reading for a Private Member's Bill substantially the same as Mr Powell's. Instead of allowing his Bill to fail for want of time, the Government ought to find the House all the time it needs to legislate on a subject too important to be left to scientific com- mittees.