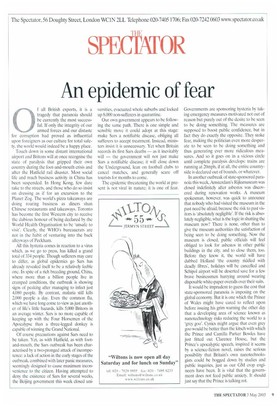 An epidemic of fear

Of all British exports, it is a tragedy that paranoia should be currently the most successful. If only the integrity of our armed forces and our distaste for corruption had proved as influential upon foreigners as our culture for total safety, the world would indeed be a happy place.

Touch down in some distant international airport and Britons will at once recognise the state of paralysis that gripped their own country during the foot-and-mouth crisis and after the Hatfield rail disaster. Most social life and much business activity in China has been suspended. In Hong Kong, few dare take to the streets, and those who do so insist on dressing as if for an excursion to the Planet Zog. The world's pizza takeaways are doing roaring business as diners shun Chinese restaurants and takeaways. Toronto has become the first Western city to receive the dubious honour of being declared by the World Health Organisation to be 'unsafe to visit'. Clearly, the WHO's bureaucrats are not in the habit of venturing into the back alleyways of Peckham.

All this hysteria comes in reaction to a virus which, as we go to press, has killed a grand total of 334 people. Though sufferers may care to differ, as global epidemics go Sars has already revealed itself to be a relatively feeble one. In spite of a rich breeding ground, China, where more than a billion people live in cramped conditions, the outbreak is showing signs of peaking after managing to infect just 4,080 people. By contrast, malaria still kills 2,000 people a day. Even the common flu, which we have long come to view as just another of life's little hazards, kills 5,000 Britons in an average winter. Sars is no more capable of keeping up with the Four Horsemen of the Apocalypse than a three-legged donkey is capable of winning the Grand National.

Of course precautions against Sars need to be taken. Yet, as with Hatfield, as with footand-mouth, the Sars outbreak has been characterised by a two-pronged attack of incompetence: a lack of action in the early stages of the outbreak, combined with later panic measures, seemingly designed to cause maximum inconvenience to the citizen. Having attempted to deny the existence of Sars for several weeks, the Beijing government this week closed uni

versities, evacuated whole suburbs and locked up 8.000 non-sufferers in quarantine.

Our own government appears to be following the same path. There is one simple and sensible move it could adopt at this stage: make Sars a notifiable disease, obliging all sufferers to accept treatment. Instead, ministers insist it is unnecessary. Yet when Britain records its first Sars deaths — as it inevitably will — the government will not just make Sars a notifiable disease; it will close down the Underground, lean on football clubs to cancel matches, and generally scare off tourists for months to come.

The epidemic threatening the world at present is not viral in nature; it is one of fear. Governments are sponsoring hysteria by taking emergency measures motivated not out of reason but purely out of the desire to be seen to be doing something. The measures are supposed to boost public confidence, but in fact they do exactly the opposite. They stoke fear, making the politician even more desperate to be seen to be doing something and thus generating ever more ridiculous measures. And so it goes on in a vicious circle until complete paralysis develops: trains are running at 20mph, if at all, the entire countryside is declared out of bounds, or whatever.

In another outbreak of state-sponsored paranoia this week, Amsterdam's Rijksrnuseum was closed indefinitely after asbestos was discovered during renovation works. A museum spokesman, however, was quick to announce that nobody who had visited the museum in the past need be afraid, because the risk to past visitors is 'absolutely negligible'. If the risk is absolutely negligible, what is the logic in shutting the museum now? There is none, other than to give the museum authorities the satisfaction of being seen to be doing something. Now the museum is closed, public officials will feel obliged to look for asbestos in other public buildings in the city, and to close them, too. Before they know it, the world will have dubbed Holland 'the country riddled with deadly fibres', holidays will be cancelled and Schipol airport will be deserted save for a few brave businessmen hurrying around wearing disposable white-paper overalls over their suits.

It would be imprudent to guess the cost that state-sponsored paranoia is imposing on the global economy. But it is one which the Prince of Wales might have cared to reflect upon before issuing his grim warning the other day that a developing area of science known as nanotechnolog risks reducing the world to a 'grey goo'. Cynics might argue that even grey goo would be better than the kitsch with which the Prince and Camilla Parker Bowles have just fitted out Clarence House, but the Prince's apocalyptic speech, inspired it seems by a science-fiction novel, raises the serious possibility that Britain's own nanotechnologists could be bogged down by studies and public inquiries, just as our GM crop engineers have been. It is vital that the government does not feed public anxiety. It should just say that the Prince is talking rot.