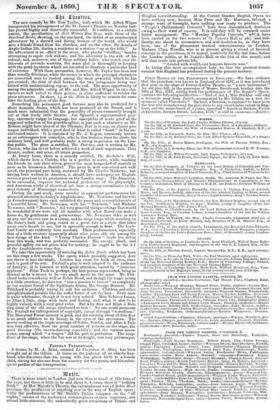 On the 21st of October, the Lady Charles Pelham Clinton, of a son.

On the 26th, at 16, Rutland Gate, the Lady Alfred Spencer Churchill, of a daugh- ter.

On the 21st of August, at Victoria, by the Lord Bishop of Columbia and Van- couver Island, Henry Montague Doughty, Esq., of Theberton, Suffolk, to Edith Rebecca, youngest daughter of David Cameron, Esq., Chief Justice of 'Vancouver Is- land:

On the 20th, ether Majesty's Legation, Berlin, Mr. Augustus B. Paget, her Ma- jesty's Envoy Extraordinary and Minister Plenipotentiary at Copenhagen, to the Countess Hohentlial, Maid of Honour to 11.8.11. the Princess Frederic William of Prussia.

On the 25th, at St. Marylebone Church, the BST. Richard Hughes, second son of the Yen. Archdeacon Hughes, to Agnes Matilda, youngest daughter of the late Richard'Herinon, Esq., of St. John's Wood.

On the 30th, at Chaddleworth, by the Lord Bishop of Oxford, Beitram Wode- house Currie, Esq., to Caroline Louisa, younger daughter of the late Sir William Lawrence Young, Bart. On the 30th, at Newick, the Hon. Charles Cornwallis Chetwynd; third son of Viscount Chetwynd, to Emily Hannah, only daughter of W. H. Blaauw, Esq., of Beechlands, Sussex.

On the 24th of October, at Pembroke Dock, Anna Elizabeth, Wife of Major Rolle- ston, Eighty-fourth Regiment, and daughter of' the late 0. E: Layard, Esq., of the Ceylon Civil Service.

Oit the 27th, at Thnresby Pe . Park, Notts, the Earl Marivers. aged eighty-two. On the 27th, at Slough, in the sixty-first year of her age, Juliana Elizabeth. Relict of the late Reverend George Rowley, D.D.. Master of .Univereity .College, Oxford, and youngest daughter of the late Reverend Thomas Ripley. On the 28th, at Cambridge Terrace, 'Hyde Park, William Hewetson, Esq., Com- missary-General to her Majesty'eArmy, in the seventy-second year of his age.'