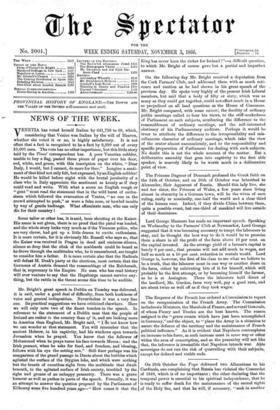 Page 1, 3 November 1866 — Lord George Manners has made an important speech. Speaking on
Close

Lord George Manners has made an important speech. Speaking on

Wednesday to the Farmers' Club at Newmarket, Lord George suggested that it was becoming necessary to tempt the labourers to stay, and he thought the best way to do it would be to promise them a share in all the profit of the farm above 10 per cent, on the capital invested. As the average yield of a farmer's capital is barely 8 per cent., that promise will not add much to wages, not half so much as a 10 per cent. reduction in rentals would. Lord George is, however, the first of his class to see what we believe to be a truth, that the labourer must in one way or another share in the farm, either by cultivating bits of it for himself, which will probably be the first attempt, or by becoming himself the farmer, as he is at Assington. There the labourers hold direct of the landlord, Mr. Gm.don, farm very well, pay a good rent, and are about twice as well off as if they took wages.