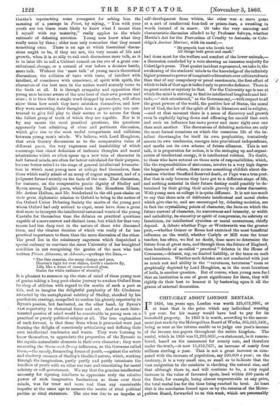 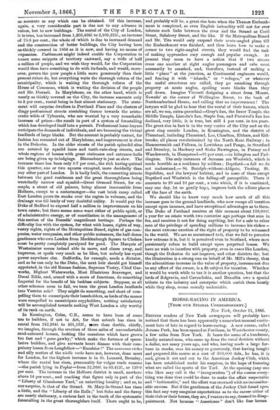 TN 1856, teu. years ago, London was worth 225,673,2601.; or I.' at least that is the price which any individual wanting 5 per cent. for his money would have had to pay for its household property. In 1866 it is worth, according to the assess- ment just made by the Metropolitan Board of Works, 305,055,3401., being as near as the returns enable us to judge one year's income of the income tax-payers throughout the entire kingdom. The rental, which in 1856 was 11,283,663/.,—a statement, be it remem- bered, based on the assessment for county rate, and therefore under the truth,—is now 15,252,7671., an increase of nearly four millions sterling a year. That is not a great increase as com- pared with the increase of population, say 100,000 a year; on the contrary, it is a very small one,, so small as to indicate that the vast emigration to the outskirts is checking the natural rise, and that although there, is, and will continue to be, a very rapid increase in the value of favoured spots; land within 200 yards of the Bank, for example, being almost unprocurable at any price, the total rental has for the time being reached its level. At least that is the conclusion forced upon us-by the returnsof the Metro- politan Board, forwarded to-us -this week, which are presumably as accurate as any which can be obtained. Of this increase, again, a very considerable part is due not to any , advance in values, but to new buildings. The rental of the City of London, it-is.trae, has increased from 1,203,4661. to 2,109,2351., an increase of 75.3 per cent., the whole of "which is due to increased demand and the ,construction of better buildings, the City having been asithickly covered in 1856 as it is now, and having no means of expansion. Parliament might indeed enable the Corporation to annex some snippets of territory eastward, say a trifle of half a million of people, and we wish they would, for the Corporation would then have something to do with Refunds, and would, more- over, govern the poor people a little more generously than their present rulers do, but everything waits the thorough reform of the municipality, which is waiting the thorough reform of the Hduse of Commons, which is waiting the decision of the people -and Mr. Disraeli. In Marylebone, on the other hand, which is nearly as thickly covered as the City, the increase amounts only to 5 per cent., rental-being in fact almost stationary. The state- ment will surprise dwellers in Portland Place and the clusters of dingy professionalstreets stretching thence towards the aristo- cratic wilds of Tyburnia, who are worried by a very remarkable increase of prices—the result in part of a system of forestalling which has developed itself into a pursuit. Professional lease-buyers anticipate the demands of individuals, and are becoming the virtual landlords of large blocks. But the account is probably correct, for fashion has retreated out of Marylebone, and improvement is slow in the Dukeries. In the older streets of the parish splendid sites are. covered by squalid lanes and tenth-rate-shop streets, and whole regions of houses with great staircases and entrance-halls are being given up to lodgings. Bloomsbury is just as slow. The increase there has been only 51 per cent., the rich having quitted this quarter, one or two squares -excepted, more decidedly than any other part of London. It is badly built, the connecting streets between the good residences and the great thoroughfares being -wretchedly narrow and squalid—Great Ormond Street, for ex- ample, a street of old palaces, being almost inaccessible from Holborn, except to a costermonger—the vast brick camp called East London pours its smoke over the region in volumes, and the drainage was till lately of very doubtful utility. It would pay the Duke of Bedford to expend half a million in improvements on his town estate; but there seems some want either of public spirit, or of administrative energy, or of conciliation in the management of -this section of the Russells' magnificent heritage. Perhaps the difficulty lies with the system, for what with leases, rights of way, vestry rights, rights of the Metropolitan-Board, rights of gas com- panies, water companies, and other-public nuisances, the half-dozen gentlemen who own London from Meeklenburgh Square to Chelsea must be pretty completely paralyzed for good. The Marquis of Westminster. seems indeed able to move, and clears away, and improves, or spoils very much as he likes, but nobody has equal power anywhere else. Bedfordia, for example, needs a dictator, -and as he-can only be the Duke, the next heir should get himself appointed, in the old Roman fashion, Supreme Vestry, Chief Gas- -works, Highest Waterworks, Most Illustrious Scavenger, and Ducal- Edile, and, armed with a score of functions, do something Imperial for the benefit of his lucklees- subjects.- Suppose, as all other schemes seem to fail, we turn the great London landlords into Vestries sole? They might-do something, and short of com- pelling them to emancipate their leaseholders, as lords of the manor were compelled to einanicipate copyholders, nothing satisfactory will be accomplished towards making West London a city worthy of its rank on earth.

In Kensington, Coles, C.B., seems to have been of some use to builders, if not to Art, for that suburb has risen in rental from 242,284/. to 501,1321., wore than double, chiefly, we imagine, through the erection of those miles of uncomfortable mud-coloured houses, looking like mansions which have grown too fast and "gone gawky," which make the fortunes of specu- lative builders, and give servants heart disease with their com- pulsory lesson from Longfellow —" Exoelsior I" The nouveaux riches and silly section of the vieille roche have not, however, done most for London, for the highest increase is in St. Leonard, Bromley, where the rental has risen, presumably for vulgar trade reasons —the parish lying in Poplar—from 32,268/. to 83,412/., or 129.9 per cent. The increase in the Holborn district is small, nowhere above 14 per cent., and reaching that figure only in part of the "Liberty of Glasshouse Yard," an uninviting locality ; and so, to our surprise, is that of the Strand. St. Mary-le-Strand has risen a little, and the "Liberty of the Rolls ;" but Soho and the Savoy -are nearly stationary, a curious fact in the teeth of the systematic forestalling in the great thoroughfare itself. There ought to be, and probably will be, a great rise here when the Thames Einba,nk., ment is completed, as even English imbecility will not for ever tolerate such links between the river and the Strand as Cecil Street, Salisbury Street, and the like. If the Metropolitan Board and Mr. Tite would only suspend their acute-angled plum till the Embankment was finished, and then learn how to make a corner to two right-angled streets, they would find the togir of making approaches easy enough and popular enough. At present they seem to have a notion that if two streets cross one another at right angles passengers and cabs must necessarily be smashed, and, therefore, instead of making a little " place " at the junction, as Continental engineers would, and fencing it with "islands," or "refuges," or whatever the useful structures are called, they go smashing through property at acute angles, spoiling more blocks than they pull down. Imagine Visconti designing a street from Messrs. Newalls' at the corner of Wellington Street, to the back of Northumberland House, and calling that an improvement ! The lawyers will be glad to hear that the rental of their haunts, which are all, we sae, extra-parochial—Gray's Inn, the Inner Temple, the Middle Temple, Lincoln's Inn, Staple Inn, and Furnival's Inn has declined, very little, it is true, but still 4 per cent. in ten years. The great rise in fact-is in the very centre of the City and on the great ring outside London, in Kensington, and the district of Plumstead, including Plumstead, Lee, Charlton, Eltham, and Kid- brooke, all places revolutionized by the North Kent Railway ; in Hammersmith and Fulham, in Lewisham and Penge, in Stratford and Bromley, in Hackney and Stoke Newington, in Putney and Wandsworth, in Hampstead-91 per cent.—in Islington and Pad- dington. The only instances of decrease are Woolwich, which is made horrible as a residence by soldiers ; Deptford—a fall we do not understand,— St. Botolph-without-Aldgate, Tooting, St. Sepulchre, and the lawyers' habitat, and in none of these except Deptford and Woolwich is the falling-off perceptible. There it amounts to 20 and 10 per cent., a rate which, if it is continued, may one day, let us gently hope, improve both the odious places off' the face of the earth.

We should like to know very much how much of all this increase goes to the ground landlords, who now escape all taxation except upon incomes, and have exceptional advantages as to them. The Duke of Portland receives at this moment about 110,000/. a year for an estate worth two centuries ago perhaps that sum in fee, and receives it not for doing anything, but for a sale to other men of the privilege of spending millions to increase his riches — the most extreme exertion of the right of property to be witnessed in the world. We are so accustomed to it, that we fail to perceive how extreme it is, but it is perceived even in Scotland, where men persistently refuse to build except upon perpetual leases. We have no wish to interfere with property, even in cases like London; though the Dukeries do not improve, and other districts do; but the illustration is a strong one on behalf of Mr. Mill's theory, that the adventitious increase in the value of property, increase not due to any effort of the owner, is a fit subject for taxation. Whether it would be worth while to tax it is another question, but that the lords of Belgravia, and Cavendishia, and Russellia owe a special tribute to the industry and enterprise which enrich them hourly while they sleep, seems morally undeniable.