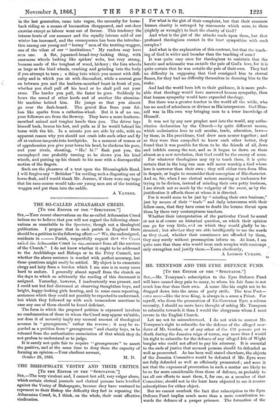 Page 13, 3 November 1866 — THE BISHOPSGATE VESTRY AND THEIR CRITICS. [To THE EDITOR OF
Close

THE BISHOPSGATE VESTRY AND THEIR CRITICS. [To THE EDITOR OF

THE "SPECTATOR."] SIR,—The very virulent and, I cannot but add, very vulgar abuse, which certain clerical journals and clerical persons have levelled against the Vestry of Bishopsgate, because they have ventured to represent to their Bishop the difficulty they feel in repeating the Athanasian Creed, is, I think, on the whole, their most effective vindication.

For what is the gist of their complaint, but that their common human charity is outraged by statements which seem to them (rightly or wrongly) to limit the charity of God?

And what is the gist of the attacks made upon them, but that professed theologians cannot in the least sympathize with such scruples ?

And what is the explanation of this contrast, but that the teach- ing of God is wider and broader than the teaching of man?

But there was a greater teacher in the world all the while, who has no need of schoolmen or divines as His interpreters. God Him- self was in His own way bringing men to a truer knowledge of Himself.

It was not by any new prophet sent into the world, any autho- ritative declaration by the Church—by quite different means,

by these, in His providence, God drew men nearer together ; and as they were thus compelled to know each other better, they found that it was possible for them to be the friends of all, Jews and infidels among the rest, and so it began to dawn on them almost as a new revelation, that God could be the enemy of none. For whatever theologians may try to teach them, it is quite certain that in the long run men will never worship a God whose love is narrower than their own ; they will either turn from Him in despair, or begin to reconsider their conception of His character. And so, Sir, when I see clerical writers sneering at tradesmen for trying to be divines, instead of minding their own petty business, I am struck not so much by the vulgarity of the sneer, as by the justification it affords those at whom it is directed.

For it would seem to be just by "minding their own business," just by means of their " trade " and daily intercourse with their fellow-men, that they have come to doubt the lessons thrust upon them by these very contemptuous teachers.

Whether their interpretation of the particular Creed be sound or not is of course an historigal question, on which their opinion

can go for very little, and 'on which they would gladly be in- structed; but whetLer they are able intelligently to use the words as thPy zt.n.d, whether their consciences are offended by them, they may surely without presumption inform us. At least, I am quite sure that those who would treat such scruples with contempt • only strengthen and justify thein.—Yours obediently, A LONDON CURATE. '