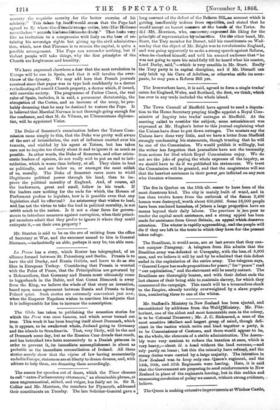 Page 2, 3 November 1866 — The season for speeches out of doors, which the Times
Close

The season for speeches out of doors, which the Times

chooses to call "extra-Parliamentary utterances," an abominable phrase, at once ungrammatical, stilted, and vulgar, has fairly set in. Sir R. Collier and Mr. Morrison, the members for Plymouth, addressed their constituents on Tuesday. The late Solicitor-General gave a long account of the defeat of the Reform BiRean account which is getting insufferably tedious from repetition, and stated that he would accept an honest monsare at the hands of the Tories. So did Ali— Morrison, who, moreover, expressed ,his liking for the principle of representationisisminerities. On the other hand, Mr. Start, the Tory member for Dorset, told his constituents on Wed- nesday that the object of Mr. Bright was to revolutionize England, and was going apparently to make a strong speech against Reform, whet-ribs checked, himself, and told his amused aadienee that ," he was not going to open his mind fully till he heard what his master, Lord Derby, said,"—which is very sensible in Mr. Start. Really' the Tory party is in capital. discipline, and if Mr. Disraeli can only brick up his Cave of. Adullam, or otherwise stifle -its occu- pants, he may pass a Reform, Bill yet.