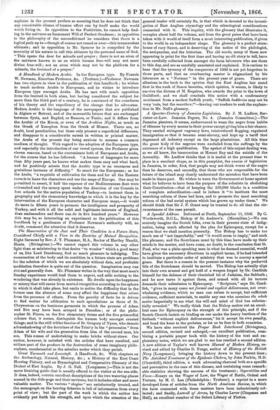 Page 20, 3 November 1866 — The Resurrection of the Just and Their Condition in a
Close

The Resurrection of the Just and Their Condition in a

Future State, Considered Chiefly with a View to the Doctrine of Mutual Recognition. Eight Sermons by Rev. J. T. Plummer, MA., Rector of Hartley Mandit, Hants. (Rivingtons.)—We cannot regard this volume in any other light than as ministering to that desire "to wonder" which a good many of us, like Lord Dundreary, find so much pleasure in indulging. The resurrection of the body and its condition in a future state are problems for the solution of which we are absolutely without data, and profitable meditation therefore is quite out of the question. Imagination may run riot and generally does. Mr. Plummer writes in the way that most men's Sunday experience would lead them to expect, and adds nothing to the wondering that was already in existence. He dwells upon the happiness or misery that will ensue from mutual recognition according to the sphere in which it shall take place, but omits to notice the difficulty that in the former case the absence of some may affect the happiness that arises from the presence of others. From the paucity of facts he is driven to find matter for edification to such speculations as those of St. Chrysostom on the luminous garments in which the persons of Adam and Eve may have been arrayed in Paradise ; or of the philo- sopher St. Pierre, on the five elementary forms and the five primordial colours that, it seems, distinguish the human body amongst created things; and in the still wilder fancies of St. Gregory of Nyasa, who detects a foreshadowing of the doctrines of the Trinity in the " procession " from Adam of his wife and the generation from him of the second man, his son. This comes of undertaking to make bricks without straw. Our author, however, is satisfied with the articles that have resulted, and utilizes part of the produce in the destruction of some imaginary philo- sophera, unsubstantial as the missiles under which they perish.