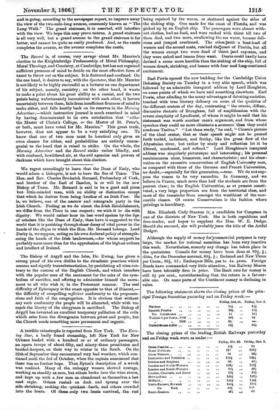 Page 3, 3 November 1866 — We regret exceedingly to learn that the.Dean of Emly, who
Close

We regret exceedingly to learn that the.Dean of Emly, who

-would adorn a bishopric, is not to have the See of T118,01. The Hon. and Rev. Charles Broderick Bernard, Prebendary of Conk, and brother of the Earl. of Bandon, is or will be the new Bishop of Tuam. Mr. Bernard is said to be .a good and pious- lint little-minded man, with no ability,or distinction except that which he derives from. being brother, of an Irish Peer.. Ile. isr we believe, one of the narrow and retrograde party in the Irish Church. Feeling as we do about the Irish Establishment, -we differ from the Times in one respect; we wish it to die.with dignity. We would rather hear its, last word spoken by the lips -of scholars like the Dean of. Etaly,..thanhave it suggested to the- world that it is perishing through sheer decay of vital power in the hands-of the clique to which the .Hon. Mr. Bernard belongs. Lord, Derby is, we suppose, acting on his own declared policy of strength-, -ening the hands of the Irish landowners,-for whose aupporb he probably cares more than-for the approbation of the highest•culture: .and intellect of -Ireland.