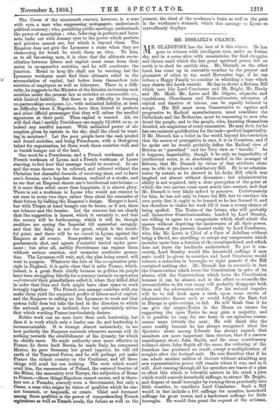 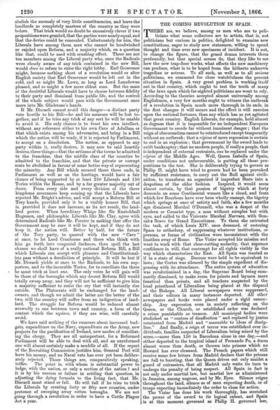 Air R. GLADSTONE has the best of it this winter. He has JL gone to witness with intelligent eyes, under an Italian sky, and in a scene alive with associations, the final struggles and throes amid which the last great spiritual power left on earth is to shed its earthly skin. Mr. Disraeli, on the other hand, has come up in execrable weather to the greyest and gloomiest of cities to try, amid November fogs, if he can induce a Happy Family to combine in whistling a tune which may charm the hawk outside. He has to devise a Reform Bill which men like Lord Cranborne and Mr. Bright, Mr. Hardy and Mr. Miall, Mr. Lowe and Mr. Odgers, oligarchs and republicans, Churchmen and Nonconformists, advocates of capital and fanatics of labour, can be equally induced to accept. His Bill must seem Conservative to squires and progressive to Radical manufacturers, must conciliate the Cathedrals and the Bethesdas, must be reassuring to men who dread the people, and to the people, who, knowing themselves dreaded, are suspicious of every concession. He may do it, for he has one eminent qualification for the.task—perfect impartiality. If Mr. Disraeli has a belief in the world, beyond his conviction that the source of prerogative is race, it is in Cassarism, and if he spoke out he would, probably define the Radical view of Reform as "parochial" and the Tory view as "bucolic." As it happens, impartiality, though it be only an impartiality of intellectual scorn, is so absolutely needed in the manager of Reform, that Mr. Disraeli by virtue of that attribute alone may be able to produce a satisfactory Bill. He is no adminis- trator by nature, as he showed in his India Bill, which was laughed out almost without discussion ; but administrative ability is not required, only a clear perception of the point at which the two parties come most nearly into contact, and that Mr. Disraeli is very likely indeed to perceive. Unfortunately for him, he has not only to frame his Bill, but to convince his own party that it ought to be framed as he has framed it, and has therefore to tinker his work till it runs a strong chance of being spoiled. The Tories of the future, who will probably call themselves Constitutionalists, headed by Lord Stanley, are willing to agree to a compromise which shall admit the masses without depriving the landowners of all their power. The Tories of the present, headed really by Lord Cranborne, who, like Mr. Lowe, is Chief of a Cave of Adullam without being a David, are unwilling to accept any compromise which includes more than a fraction of the unenfranchised, and which does not leave the landlords undisturbed. To put it con- cretely, Lord Stanley would like household suffrage if new seats could be given to counties, and Lord Cranborne would tolerate a reduction in boroughs to eight pounds if the Bill contained nothing else. Mr. Disraeli has to reconcile in fact the Conservatism which loves the Constitution in spite of its abuses, with the Conservatism which loves the Constitution because it can be abused, and in the effort to reconcile the irreconcilables in his own camp will probably disappoint both them and the adversaries outside. For his natural impulse will be to fall back upon a trick, upon some stroke of administrative finesse such as would delight the East, but in Europe is quite certain to fail. He will think that if he can give the crypto-Tories in the House an excuse for supporting the open Tories he may gain a majority, and it is possible he may, for one hour, to see agitation recom- mence more bitterly the next. He will think this the more readily because he has always recognized what the Spectator alone among Liberals has always argued, that members are more important than electors, that if a narrow constituency elects John Smith, and the same constituency widened elects John Smith all the same, the widening of the franchise has produced no result, except a multiplication of noughts after the decimatunit. He sees therefore that if he can admit another million of electors without admitting any new representatives power will remain where it was, and so it will. And running through all his speeches are traces of a plan to effect this which is tolerably mature in his mind, a plan which would concede household suffrage, to attract Mr. Bright, and dispose of small boroughs by turning them practically into little counties, to conciliate Lord Cranborne. Such a Bill would in fact include a 10/. suffrage for counties, household suffrage for great towns, and a landowner suffrage for little boroughs. He would thus grant the request of the artizans, abolish the anomaly of very little constituencies, and leave the landlords as completely masters of the ,country as they were before. That trick would no doubt be excessively clever if two propositionswere granted, that the parties were nearlyequal, and that the device could be concealed. Unfortunately for him, the Liberals have among them men who cannot be hoodwinked or cajoled upon Reform, and a majority which, on a question like that, could be used with crushing effect. There are not ten members among the Liberal party who, once the Radicals were clearly aware of any trick contained in the new Bill, would dare to refuse to enter the right lobby. Earl Grosvenor might, because nothing short of a revolution would so alter English society that Earl Grosvenor would be left out in the cold, and so might Mr. Lowe, as long as Lord Lansdowne pleased, and so might a few more eldest sons. But the mass of the doubtful Liberals would have to choose between fidelity to their party and dismissal from public life, and the control of the whole subject would pass with the Government once more into Mr. Gladstone's hands.

If Mr. Disraeli cannot avoid this danger—a distinct party vote hostile to his Bill—he and his measure will be lost to- gether, and if he tries any trick of any sort he will be unable to avoid it. His only chance is to trust his own intellect, without any reference either to his own Cave of Adullam or that which exists among his adversaries, and bring in a Bill which the nation will be ready, if it is rejected by Parliament, to accept on a dissolution. The nation, as opposed to any party within it, really desires, it may now be said heartily desires, three things—that the artizans of the towns be admitted to the franchise, that the middle class of the counties be admitted to the franchise, and that the private or corrupt seats be abolished in favour of some better way of representing the minority. Any Bill which secured those three ends, in Parliament as well as on the hustings, would have a fair chance of being supported by at least 250 Liberals and 150 Tories within the House, and by a far greater majority out of doors. From every side and every division of the three kingdoms assurances keep coming up that the Liberals have rejected Mr. Bright's advice, and will accept a Reform Bill at Tory hands, provided only it be a visibly honest Bill, that is, provided it does not increase, as its net result, the land- lord power. When hereditary Whigs like Sir Knatchbull Hugessen, and philosophic Liberals like Mr. blay, agree with determined Radicals like Mr. Forster in making that offer the Government may be sure it will be kept, and if they do not keep it, the nation will. Better by half, for the future of the Tory party, to quarrel with the new " Cave " at once, to let Lord Cranborne and those who think with him go forth into congenial darkness, than spoil the last chance we shall have of a really national Reform Bill, a Bill which Liberals can accept with pleasure and Constitutional- ists pass without a dereliction of principle. It will be lost if Mr. Disraeli yields at once to the Radicals, to his own sup- porters, and to the incurable Tories, for to conciliate the three he must trick at least one. The only votes he will gain will be those of the boroughs which any decent Reform Bill would totally sweep away, and they will not be sufficient to give him a majority sufficient to resist the cry that will instantly rise outside. The Plutocrats will be exchanged for the land- owners, and though we admit the latter are the better of the two, still the country will suffer from an indigestion of land- lord. The struggle for Reform would be reduced almost avowedly to one between town and country, a form of the contest which the squires, if they are wise, will carefully avoid.

We have said nothing of the rumours about increased bud- gets, expenditure on the Navy, expenditure on the Army, new projects for the pacification of Ireland, new modes of conciliat- ing the clergy. They are all unimportant, for a Reformed Parliament will be able to deal with all, and an unreformed one will almost certainly make a muddle of all. If the report of the Recruiting Commission justifies him, General Peel will have his money, and no Naval vote has ever yet been deliber- ately rejected. Those things are, comparatively speaking, trifles. The point is, with whom is substantial power to lodge, with the nation, or only a section of the nation ? and it is by his success or failure in settling that question, in adjusting the dying formula to the living fact, that Mr. Disraeli must stand or fall. He will fall if he tries to trick the Liberals by creating forty or fifty new counties, under pretence of sweeping away rotten boroughs. We are not going through a revolution in order to have a Cattle Plague Act a year.