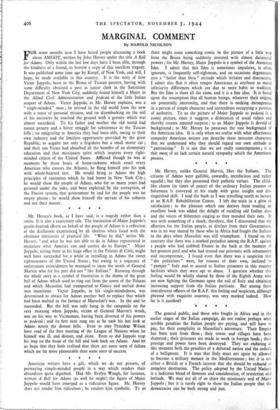 FOR some months now I have heard people discussing a book about AMGOT, written by John Hersey under the title A Bell for Adano. Only within the last few days have I been able, through the kindness of a friend, to borrow a copy of this excellent tragedy. It was published some time ago by Knopf, of New York, and will, I hope, be made available in this country. It is the story of how Victor Joppolo, born in the Bronx of Tuscan parents, having with some difficulty obtained a post as junior clerk in the Sanitation Department of New York City, suddenly found himself a Major in the Allied Civil Administration and podesta of the little Italian seaport of Adano. Victor Joppolo, as Mr. Hersey explains, was a. " single-minded " man ; he arrived in the old world from the new with a sense of personal mission, and on disembarking on the soil of his ancestors he touched the ground with a gesture which was almost sacerdotal. To his father and mother the old world had meant penury and a bitter struggle for subsistence in the Tuscan hills ; on emigrating to America they had been able, owing to their own industry and the limitless opportunity provided by the great Republic, to acquire not only a frigidaire but a small motor car ; and their son Victor had absorbed all the benefits of an elementary education and that missionary spirit which inspires every right- minded citizen of the United States. Afflicted though he was at moments by those bouts of home-sickness which assail every American who crosses the Atlantic, he flung himself into his task with whole-hearted zest. He would bring to Adano the high principles of sanitation which he had learnt in New York City ; he would show the people of Adano, who for so many years had groaned under the yoke, and been exploited by the corruption, of the Fascist•system, that government by and for the people was no empty phrase ; he would show himself the servant of his subjects and not their master.