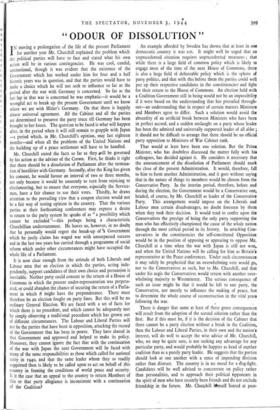 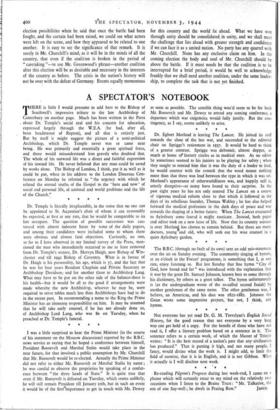 IN moving a prolongation of the life of the present Parliament 1 for another year Mr. Churchill explained the problem which the political parties will have to face and stated what his own action will be in various contingencies. He was cool, candid, unemotional, though it was evident that the existence of the Government which has worked under him for four and a half historic years was in question, and that the parties would have to make a choice which he will not seek to influence so far as the period after the war with Germany is concerned. So far as the last lap in that war is concerned he was emphatic—it would be a wrongful act to break up the present Government until we know where we are with Hitler's Germany. On that there is happily almost universal agreement. All the Cabinet and all the parties are determined to preserve the party truce till Germany has been brought to her knees. The question to be faced is what will happen after, in the period when it will still remain to grapple with Japan —a period which, in Mr. Churchill's opinion, may last eighteen months—and when all the problems of the United Nations and the building up of a peace settlement will have to be handled.

Mr. Churchill stated the facts so far as they evill be governed by his action as the adviser of the Crown. First, he thinks it right that there should be a dissolution of Parliament after the termina- tion of hostilities with Germany. Secondly, after the King has given his consent, he would favour an interval of two or three months, not only because it would be unseemly to turn from rejoicing to electioneering, but to ensure that everyone, especially the Service- men, have a fair chance to use their votes. Thirdly, he draws attention to the prevailing view that a coupon election would not be a fair way of testing opinion in the country. That the various parties at their forthcoming conferences may express a desire to return to the party system he speaks of as " a possibility which cannot be excluded "—this perhaps being a characteristic Churchillian understatement. He leaves us, however, in no doubt that he personally would regret the break-up of % Government which he justly claims has waged war with unsurpassed success and in the last two years has carried through a programme of social reform which under other circumstances might have occupied the whole life of a Parliament.

It is now clear enough from the attitude of both Liberals and Labour nien that an election in which the parties, acting inde- pendently, support candidates of their own choice and persuasion is inevitable. Neither party could consent to the return of a House of Commons in which the present under-representation was perpetu- ated, or could abandon the chance of securing the return of a Parlia- ment in which it might have the preponderance. There must therefore be an election fought on party lines. But this will be no ordinary General Election. We are faced with a set of facts for which there is no precedent, and which cannot be adequately met by simply observing a traditional procedure which has grown out of different circumstances. The Labour and Liberal Parties will not be the parties that have been in opposition, attacking the record of the Government that has been in power. They have shared in that Government and approved and helped to make its policy. Moreover, they cannot ignore the fact that with the continuation of the war with Japan the next Government will be faced with many of the same responsibilities as those which called for national unity in 1940, and that the same leader whom they so readily supp6rted then is likely to be called upon to act on behalf of this country in framing the conditions of world peace and security. Is it the case that an appeal to the country to return Members of this or that party allegiance is inconsistent with a continuation of the Coalition' An example afforded by Sweden has shown that at least in one democratic country it was not. It might well be urged that an unprecedented situation requires unprecedented measures ; that while there is a large field of common policy which is likely to engage most of the time of the next House of Commons, there is also a large field of debateable policy which is the sphere of party politics, and that with this before them the parties could well put up their respective candidates in the constituencies• and fight for their return to the House of Commons. An election held with a Coalition Government still in being would not be an impossibility if it were based on the understanding that has prevailed through- out—an understanding that in respect of certain matters Ministers and Members agree to differ. Such a solution would avoid the absurdity of an artificial break between Ministers who have been in perfect accord, and a sudden onslaught on a party whose leader has been the admired and universally supported leader of all alike ; it should not be difficult to arrange that there should be no official party opposition to Ministers of War Cabinet rank.

That would at least have been one solution. But the Prime Minister, who has doubtless discussed the matter fully with his colleagues, has decided against it. He considers it necessary that the announcement of the dissolution of Parliament should mark the close of the present Administration. It would, therefore, fall to him to form another Administration, and it goes without saying that in the nature of things its members would be chosen from the Conservative Party. In the interim period, therefore, before and during the election, the Government would be a Conservative one, headed, of course, by Mr. Churchill as leader of the Conservative Party. This arrangement would impose on the Liberals and Labour men certain disadvantages, no doubt foreseen by them when they took their decision. It would tend to confer upon the Conservatives the prestige of being the only party supporting the man who has effectively championed the cause of the whole nation through the most critical period in its history. In attacking Con- servatives in the constituencies the self-constituted Opposition would be in the position of opposing or appearing to oppose Mr. Churchill at a time when the war with Japan is still not won, and when the United Nations will be calling for him as Britain's representative at the Peace conferences. Under such circumstances it may safely be prophesied that an overwhelming vote would go, not to the Conservatives as such, but to Mr. Churchill, and that under his aegis the Conservatives would return with another over- whelming majority to Westminster. The serious consequence of such an issue might be that it would be left to one party, the Conservative, not merely to influence the making of peace, but to determine the whole course of reconstruction in the vital years following the war.

There is danger that some at least of these grave consequences will result from the adoption of the second solution rather than the first. But if this must be, if it is the decision of the Cabinet that there cannot be a party election without a break in the Coalition, then the Labour and Liberal Parties, in their own and the nation's interest, will do well to accept the wise advice of Mr. Churchill, who, we may be quite sure, is not seeking any advantage for any particular party, and would probably be happier as head of another coalition than as a purely party leader. He suggests that the parties should look at one another with a sense of impending division rather than distrust. The country is in no mood for a dog-fight. Candidates will be well advised to concentrate on policy rather than personalities, and to approach their political Opponents in the spirit of men who have recently been friends and do not exclude friendship in the future. Mr. Churchill himself hinted at post- election possibilities when he said that once the battle had been fought, and the curtain had been raised, we could see what actors were left on the scene, and how they appeared to be related to one another. It is easy to see the significance of that remark. It is surely in Mr. Churchill's mind, as it will be in the minds of all the country, that even if the coalition is broken in the period of " caretaking "—to use Mr. Greenwood's phrase—another coalition after this election will be as desirable and necessary in the interests of the country as before. The crisis in the nation's history will not be over with the defeat of Germany. Events equally momentous for this country and the world lie ahead. What we have won through unity should be consolidated in unity, and we shall meet the challenge that lies ahead with greater strength and confidence if we can face it as a united nation. No party has any quarrel with Mr. Churchill. None has any exclusive claim on him. In the coming election the body and soul of Mr. Churchill should be above the battle. If it must needs be that the coalition is to be interrupted for a brief period, it would be well to acknowledge frankly that we shall need another coalition, under the same leader- ship, to complete the task that is not yet finished.