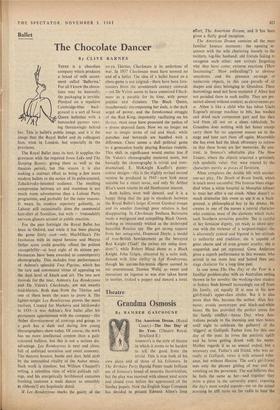 By CLIVE BARNES The Royal Ballet does its best. It supplies the provinces with the required Swan Lake and The Sleeping Beauty, giving them as well as the theatres permit, but this season it is also making a stalwart effort to bring a few more modern ballets to the notice of its palm-courted, Tchaikbvsky-besotted audience. The resulting compromise between art and mammon is not much more adventurous than a Labour Party programme, and probably for the same reasons. It wears its modern repertory gallantly, as Labour still occasionally dons the ceremonial hair-shirt of ..Socialism, but with o lerstandably nervous glances around at public reaction.

For the past fortnight the Royal Ballet has been in Oxford, and while it has been playing the game fairly cool—only MacMillan's The invitation, with its raped heroine and Matyas Seiber score could possibly offend the politest susceptibility—at least eight of its sixteen per- formances have been awarded to contemporary choreography. This includes four performances of Ashton's splendid Two Pigeons, which has the rare and convenient virtue of appealing on the dual level of kitsch and art. The two new revivals for the tour, Ashton's Les Rendezvous and De Valois's Checkmate, are not exactly trail-blazers. Both date from the Thirties and one of them bears the scars to prove it. The lighter-weight Les Rendezvous proves the more resilient. Created for Markova and ldzikowsky in 1933—it was Ashton's first ballet after his permanent appointment with the company—this Auber divertissement of comings and goings in a park has a dash and daring few young choreographers show today. Of course, the work has no more intellectual content than a gaily coloured balloon, but this is not a serious dis- advantage. Les Rendezvous is neat and clean, full of unforced invention and sweet economy. The dancers bounce, bustle and dart, held aloft by the untroubled vitality of the Auber music. Such work is timeless; but William Chappell's setting, a relentless vista of white palisade rail- ings, and his energetically beribboned costumes (nothing castrates a male dancer so smoothly as ribbons!) are hopelessly dated.

If Les Rendezvous marks the gaiety of the yo-yo Thirties, Checkmate is its undertone of war. In 1937 Checkmate must have seemed no end of a ballet. The idea of a ballet based on a chess-game is not original—there have been fore- runners from the seventeenth century onwards —yet De Valois seems to have conceived Check- mate as a parable for its time, with power politics and dictators. The Black Queen, treacherously encompassing her ends, is the dark angel of power, and the foredoomed struggle of the Red •King, impotently vacillating on his thror,e. must once have possessed the pathos of a dozen deposed faces. Now we no longer see war in simple terms of red and black, while putsches and betrayals are handled with a difference. Chess seems a dull political game to a generation busily playing Russian roulette. This shift in significance would matter less if De Valois's choreography mattered more, but basically the choreography is trivial and over- dramatised. E. McKnight Kauffer's poster- colour designs—this is the slightly revised second version he produced in 1947—now look more suitable for a smart revue, and only Sir Arthur Bliss's score retains its old flamboyant interest.

Both ballets were well danced, and it is a happy thing that the gap in standards between the Royal Ballet's larger (Covent Garden) troupe and its smaller (touring) poor relation is fast disappearing. In Checkmate Svetlana Beriosova made a malignant and compelling Black Queen, looking as innocently wicked as the archetypal beautiful Russian spy. She got strong support from her antagonist, Desmond Doyle, a model of true-British bewilderment as the betrayed Red Knight (`Gad! the swines are using dum- dum!), while Robert Mead shone as a Black Knight. John Gilpin, obscured by a satin sash, danced with lithe virility in Lt's Rendezvous, though his anyone-for-tennis charm seemed to me overstressed. Doreen Wells, as sweet and insouciant an ingenue as was ever taken home to mother, looked a poppet and danced a treat.