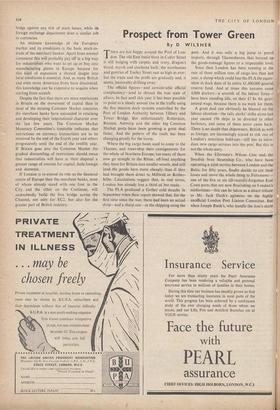 By D. WILSHER MIMES are not happy around the Pool of Lon- don. The old East India store in Cutler Street is still bulging with carpets and ivory, dragon's blood, myrrh and cinchona bark; the warehouses and gantries of Tooley Street rear as high as ever; but the trade and the profit are gradually and, it seems, inexorably drifting away.

The official figuresŌĆöand considerable official complacencyŌĆötend to shroud the true state of affairs. In fact until this year it has been possible to point to a steady annual rise in the traffic using the five massive dock systems controlled by the Port of London Authority between Tilbury and Tower Bridge. But unfortunately Rotterdam, Bremen, Antwerp and the other big Common Market ports have been growing a great deal faster. And the pattern of the trade, has been changing greatly for the worse.

Where the big cargo boats used to come to the Thames, and transship their consignments for the whole of Northern Europe, too many of them now go straight to the Rhine, off-load anything they have for Britain into smaller vessels, and still land the goods here more cheaply than if they had brought them direct to Millwall or Rother- hithe. Calculations suggest that, in real terms, London has already lost a third of her trade.

The PLA produced a further cold douche in September when their report showed that, for the first time since the war, there had been an actual dropŌĆöand a sharp oneŌĆöin the shipping using the port. And it was only a big jump in petrol imports, through Thameshaven, that buoyed up the goods-tonnage figures to a respectable level.

Since then London has been running at the rate of three million tons of cargo less than last year, a slump which could lose the PLA the equiv- alent in dock dues of its entire ┬Ż1,400,000 general reserve fund. And at times this autumn some 4,000 dockersŌĆöa seventh of the labour forceŌĆö have been standing idle, on their L7 8s. 6d. guar- anteed wage, because there is no work for them.

A great deal can obviously be blamed on the labour situationŌĆöthe tally clerks' strike alone last year caused 196 ships to be diverted to other harbours, and some of them never came back. There is no doubt that shipowners, British as well as foreign, are increasingly scared to risk one of London's notorious hold-upsŌĆöstill less to intro- duce new cargo services into the port. But this is not the whole story.

When the Ellerman's Wilson Line and. the Swedish Svea Steamship Co., who have been operating a joint service between London and the Baltic for fifty years, finally decide to cut their losses and move the whole thing to FelixstoweŌĆö one of the five or six till-recently-forgotten East Coast ports that are now flourishing on London's misfortunesŌĆöthis can be taken as a direct tribute to Mr. Jack Dash's agitators on the highly unofficial London Port Liaison Committee. But when Joseph Rank's, who handle the lion's share of Britain's flour milling, put large sums of money into developments in Antwerp, there are complex technical and financial considerations as WellŌĆö the main one being that the ┬Ż1,250,000 Belgian project will be able to handle grain ships up to 60,000 tons. Whereas the biggest that can dock in London is less than 20,000 tons.

Rotterdam has already overtaken London as the biggest, as well as the most modern, harbour system in Europe, and the Dutch have not even begun building their vast Europort extension. Hamburg, blitzed even more comprehensively than London's dockland, has completely rebuilt and is still spending ┬Ż3 million a year on major extensions. But the PLA, after doing a remark- able ┬Ż23 million job restoring the crater-strewn wharves, the shattered buildings and clearing the wreck-jammed channels (they had to raise thirty- five ships and 600 sunken small craft in the pro- cess), seem temporarily to have lost their drive. ' Of course tremendous work was done in the Course of the post-war reconstruction. But the fact remains that, until the recent announcement of a ┬Ż20 million scheme for improving Tilbdry, it had been forty years since the last major new Jock in London, the George V at North Wool- wich, was opened. And although it was then the .Most modern and up-to-date in the world, with its 35,000-ton berths, it hardly meets the needs of a modern world where Onassis and the iron-ore men talk in terms of 100,000 tons and above.

The latest of a long, sad series of inquiries into the decline of Britain's ports has been sitting since June under the chairmanship of Lord Rochdale, Vho normally presides over the Cotton Board. The Society of Shipping Executives have told them about wharves in London 'completely in- *equate to modern needs' and warehouses 'ancient, ramshackle and ' quite uneconomic to operate.' The road hauliers have demonstrated that one firm, with lorry-drivers sitting idle any- thing from five to ten hours in jammed approach roads, can easily lose ┬Ż1,000 a month waiting for registered dockers to lift the loads sitting waiting on the quays. The London Chamber of Commerce claims there are too few berths (though Tilbury should help there), and that although there are plenty of cranes in the port, many are old- fashioned and there is a shortageŌĆösometimes a complete absenceŌĆöof modern, specialised hand- ling equipment where it is needed.

At the heart of London's problems, however, remains the Dock Labour Scheme. There seems little chance that, even after the constant break- downs of recent years, the system of joint management by employers and unions could be upset without disastrous and crippling strike action. But the Rochdale Committee may recom- mend the cutting of one Gordian knot, by allow- ing unregistered labour to move goods from the warehouses during unofficial strikes (which means almost all stoppages in the port).

Until something like this is doneŌĆöand until the dockers can be persuaded to drop their opposition to double-shift working (which would reduce hours and increase available jobs, at a time when the trade is at its lowest ebb for years) ŌĆöRotterdam will continue to turn ships round faster, more cleanly, more efficiently and more cheaply. And whatever the view looks like from Westminster Bridge, the prospect from Tower Green will remain pretty glum.