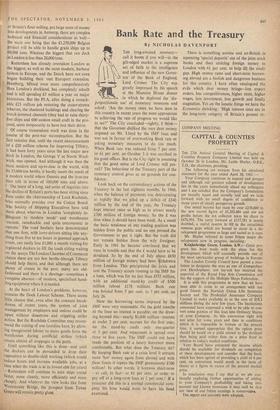 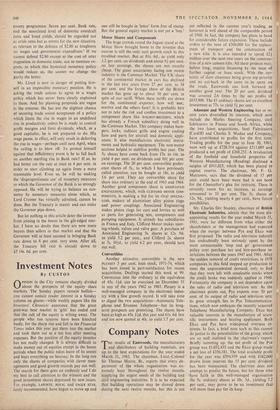 Bank Rate and the Treasury

By NICHOLAS DAVENPORT THE long-awaited recovery— call it boom if you will—in the gilt-edged market is a supreme act of faith in the intelligence and influence of the new Gover- nor of the Bank of England, Lord Cromer. The City was greatly impressed by his speech at the Mansion House dinner in which he deplored the `dis- proportionate use' of monetary measures and asked: 'Are the money rates we have seen in this country in recent years the most appropriate to achieving the rate of progress we would like to see?' The City concluded—rightly, I think— that the Governor disliked the very dear money imposed on Mr. Lloyd by the IMF loan and was not in favour of overworking Bank rate or asking monetary measures to do too much. When Bank rate was reduced from 7 per cent. to 61 per cent. on October 5 it was ascribed to his good offices. But is the City right in assuming that the good sense of Lord Cromer will pre- vail? The behaviour of the Treasury part of the monetary control gives us no grounds for con- fidence.

Look back on the extraordinary actions of the Treasury in the last eighteen months. In 1960, when the balance of payments was deteriorating so rapidly that we piled up a deficit of £340 million by the end of the year, the Treasury kept interest rates so high as to attract nearly £700 million of foreign money. So the £ was firm when it should have been weak. As a result the basic weakness of our trading position was hidden from the public and no one pressed the Government to put it right. But the truth did not remain hidden from the wily foreigner. Early in 1961 he became convinced that we were in trouble and that the £ would have to be devalued. So by the end of July about £650 million of foreign money had been 4iithdrawn from London. This precipitated the crisis and sent the Treasury scouts running to the IMF for a loan, which was for no less than £535 million, with an additional stand-by credit of $500 million (about £178 million). Bank rate was hoisted from 5 per cent. to 7 per cent. on July 26.

Now the borrowing terms imposed by the IMF were very reasonable. On the gold tranche of the loan no interest is payable; on the draw- ing beyond this—nearly $1,000 million—interest at under 2 per cent. accrues for the first year; on the stand-by credit only one-quarter of. 1 per cent. And repayment is spread over three to five years. The IMF could not have made the position of a heavy borrower more comfortable. But what does the Treasury do? By keeping Bank rate at a crisis level it attracts more `hot' money again from abroad and with these funds it repays the IMF prematurely £100 million! In other words, it borrows short-term —at call, in fact—at 61 per cent. in order to pay off at a long-term loan at 2 per cent.! If a treasurer did this in a normal commercial com- pany his boss would want to have his head examined. There is something asinine and un-British in squeezing `special deposits' out of the joint stock banks and then enticing foreign money to London with 6f per cent. to help fill the credit gap. High money rates and short-term borrow- ing abroad are a foolish and dangerous business for this country. I have often catalogued the evils which dear money brings—lost export orders, less competitiveness, higher rents, higher wages, less investment, less growth and finally stagnation. Yet on the lunatic fringe we have the Economist shrieking: `High interest rates are in the long-term category of Britain's present re-

covery programme. Seven per cent. Bank rate, and the associated level of domestic overdraft rates and bond yields, should be regarded not as crisis rates but as norms for the new situation, as relevant to the defence of $2.80 as toughness on wages and government expenditure.' If we cannot defend $2.80 except at the cost of utter stagnation in domestic trade, not to mention ex- ports, to which this hysterical monetary policy would reduce us, the sooner we change the parity the better.

Mr. Lloyd is now in danger of putting him- self in an impossible monetary position. He is asking the trade unions to agree to a wages policy which has never been clearly explained to them. And his planning proposals are vague it; the extreme. He has not the slightest chance of securing trade union acceptance of a policy which limits the rise in wages to an undefined rise in productivity unless he is ready to control profit margins and limit dividends, which, as a good capitalist, he is not prepared to do. His wage pause, in effect, will only result in deferring the rise in wages-perhaps until next April, when the ceiling is to blow off. To protect himself against that inflationary event is he to fall back on another startling rise in Bank rate? If so, he had better cut the rate at once to 4 per cent. in order to start climbing up again from a more reasonable level. Even so, he will be making the 'disproportionate use' of monetary measures to which the Governor of the Bank is so strongly opposed. He will be trying to balance an eco- nomy by monetary measures alone which, as Lord Cromer has virtually admitted, cannot be done. But the Treasury is master and can make the Governor pipe down.

But let nothing in this article deter the investor from joining in the boom in the gilt-edged mar- ket. I have no doubt that there are now more buyers than sellers in that market and that the Governor will at least succeed in bringing Bank rate down to 6 per cent. very soon. After all, the Treasury bill rate is already down to £5 14s. 6d. per cent.