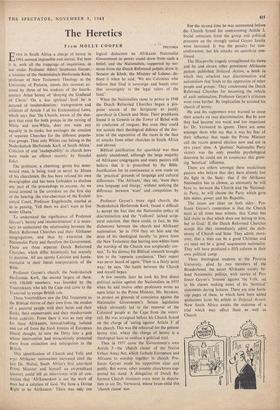 EVEN in South Africa a charge of heresy in 1961 seemed impossible and unreal. Yet here it is, with all the trappings of inquisition, in our midst. Professor Albert Stephanus Geyser, a minister of the Nederduitsch Herformde Kerk, professor of New Testament Theology at the University of Pretoria, stands this moment ac- cused by three of his students of the fourth- century Arian heresy of 'denying the Godhead of Christ.' On a less spiritual level he is accused of insubordination: transgression and criticism of Article 3 of his Ecclesiastical Laws, which says that 'the Church, aware of the dan- gers that exist for both groups in the mixing of White and non-White, does not want any equality in its ranks, but envisages the creation of separate Churches for the different popula- tion groups. Thus only Whites can belong to the Nederduitsch Herformde Kerk of South Africa.' Criticism of and 'inadaptability' to church laws were made an offence recently by Synodal Edict.

The professor, a charming, gentle but deter- mined man, is being tried in secret by fifteen of his churchmen. He has been refused his own stenographer and has been forbidden to disclose any part of the proceedings to anyone. As we stood around in the corridors on the first day of the hearing, the vice-chairman of the Ecclesi- astical Court, Professor Engelbrecht, snarled at us in passing, 'Tell them we don't want to live under Ghana.'

To understand the significance of Professor Geyser's 'heresy and insubordination' it is neces- sary to understand the relationship between the Dutch Reformed Churches and their Afrikaner congregations, and thus by extension the Nationalist Party and therefore the Government. There are three separate Dutch Reformed Churches, which differ historically but scarcely doctrine. All are sternly Calvinist and funda- mentalist in their literal interpretation of the Bible.

Professor Geyser's church, the Nederduitsch Herformde Kerk, the second largest of these, with 150,000 members, was founded by the Voortrekkers who left the Cape and came to the Transvaal to escape British rule.

These Voortrekkers saw the Old Testament as the Biblical mirror of their own lives, the exodus of a pastoral people with their herds and their flocks, their manservants and their maidservants from captivity. From there it was an easy step for these Afrikaners, inward-looking, isolated and cut off from the fresh breezes of European liberal thought, to turn the Deity into a god whose intervention had miraculously protected them from extinction and subjugation to the British.

This identification of Church and Volk and ergo Afrikaner nationalism increased until the late Dr. Malan, South Africa's first apartheid Prime Minister and himself an ex-predikant (pastor), could tell an interviewer with all con- viction that 'Afrikanerdom is not the work of Man but a creation of God. We have a Divine Right to be Afrikaners.' There was only one logical deduction an Afrikaans Nationalist Government in power could draw from such a belief, and the Nationalists, supported by ser- mons from the Dutch Reformed pulpits, drew it. Senator de Klerk, the Minister of Labour, de- fined it when he said, 'We are Calvinists who believe that God is sovereign and hands over that sovereignty to the legal rulers of the land.'

When the Nationalists came to power in 1948 the Dutch Reformed Churches began a pin- point search of the Scriptures to justify apartheid in Church and State. Their predikants found it in Genesis in the Tower of Babel with its confusion of tongues. But even they could not sustain their theological defence of the doc- trine of the separation of the races in the face of attacks from other churches in South Africa and abroad.

Biblical justification for apartheid was then quietly abandoned, although the large majority of. Afrikaner congregants and many pastors still believe that it is prescribed by the Bible. Justification for its continuance is now made on the 'practical' grounds of language and cultural differences. 'The Africans,' they say, 'want their own language and liturgy,' without noticing the difference between 'want' and compulsion by law.

Professor Geyser's more rigid church, the Nederduitsch Herformde Kerk, found it difficult to accept the fact that the Nationalist policy of discrimination and the 'Volkswil' lacked scrip- tural sanction, that there could, in fact, be this dichotomy between the church and Afrikaner nationalism. So in 1954 they set him and the dean of his theological faculty `to prove from the New Testament that barring non-whites from the worship of the Church was scripturally cor- rect.' To his dismay his Biblical research brought him to the 'opposite conclusion.' Their report was never heard of again. 'Then in a fairly quiet way,' he says, 'the battle between the Church and myself began.'

A few months later he took his first direct political action against the Nationalists in 1955 when he and twelve other professors wrote an open letter to the Prime Minister, Mr. Strydom, to protest on grounds of conscience against the Nationalist Government's Senate legislation which ultimately led to the removal of the Coloured people at the Cape from the voters' roll. He was arraigned before his Church Synod on the charge of 'acting against Article 3' of his church. This was the rehearsal for the present heresy trial, where the charge of heresy is a theological hare to confuse a political trial.

Then in 1957 came the Government's own Article 3—the 'church clause' of the Native Urban Areas Act, which forbade Europeans and Africans to worship together in church. Pro- fessor Geyser made his opposition clear and public. But worse, other notable churchmen sup- ported his stand. A delegation of Dutch Re- formed Church ministers even went in deputa- tion to see Dr. Verwoerd, whose brain-child this 'church clause' was. For the second time he was summoned before the Church Synod for contravening Article 3. Social ostracism from the group and political pressures on the strongly united Geyser family were increased. It was the penalty for non- conformism, but his attacks on apartheid con- tinued.

The Sharpeville tragedy strengthened his views and he and eleven other prominent Afrikaans pastors published Delayed Action, a book in which they attacked race discrimination and nationalism that 'leads to the oppression of other people and groups.' They condemned the Dutch Reformed Churches for becoming the vehicle of such nationalism. Professor Geyser's criticism went even further. By implication he accused his church of heresy.

He and his supporters were warned to cease their attacks on race discrimination. But by now they had become too vocal and too important for Dr. Verwoerd to ignore. There are some amongst them who say that it was his fear of their influence that made the Prime Minister call the recent general election now and not in two years' time. A 'glorious' Nationalist Party victory was the only possible psychological deterrent he could use to counteract this grow- ing 'heretical' influence.

There are others amongst these recalcitrant pastors who believe that they have already lost the fight to the State: that if the Afrikaner Nationalist has to choose, as ultimately he will have to, between the Church and the National- ist Party, he will choose the Party which gave him status, power and his Republic.

The issues are clear on both sides: Pro- fessor Geyser's contention is that the Church must at all times bear witness, that 'Cesar has laid claim to that which does not belong to him, but to God.' If the Dutch Reformed Churches accept this they immediately admit the dich- otomy of Church and State. They admit, more- over, that a man can be a good Christian and yet need not be a 'good' acquiescent nationalist. They will have produced a fifth column in their own political camp.

Three theological students at the Pretoria University, plied by two members of the Broederbond, the secret Afrikaans society be- hind Nationalist politics, with stories of Pro- fessor Geyser's 'treason' against 'the Volk, sat in his classes making notes of his 'heretical' statements during lectures. There are nine fools- cap pages of these, to which have been added quotations from his article in Delayed Action. Now South Africa awaits the outcome of a trial which may affect State as well as Church.