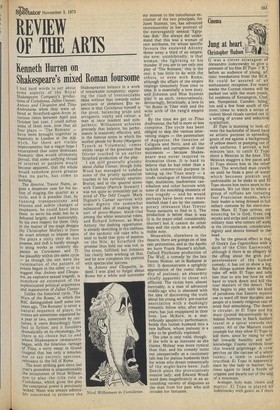 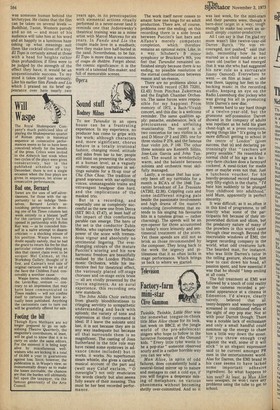 It was a clever stratagem of Alexandro Jodorowsky to give a premiere of his film El Topo C X 'Y before an audience of young, art: tistic trendsetters from the RCA.' He could be assured of an' enthusiastic reception. For many: weeks the Curzon cinema will be. packed out with the more youth,-., ful residents of Kensington,

ton and a few from south of the river, come to watch a series of violent blood rituals carried out iñ! a setting of arcane and seductiV.O. symbolism.

El Topo is stunning to look at;' even the bucketsful of blood have an artistic purpose in spreading. gouts of red against a background of yellow desert or pumping out Or dark uniforms. I arrived, a fe'lk' minutes late, to catch El ToPii' shoot a Mexican in the knee. Th'e Mexican staggers a few paces an'd El Topo shoots him in the other knee. The wretched man crawls' on until he finds a pool of water which becomes pinkish and undrinkable as he sinks in and Ei Topo shoots him twice more in the stomach. We cut then to where a group of ruffians are torturing four Franciscan monks, while their leader is being dressed in full miliary costume by his slave-mistress Mara. El Topo arrives, amnouncing he is God, frees tht monks and strips and castrates ttfe• military man who totters off wittr, in the circumstances, considerable, dignity and shoots himself in thehead.

So far the general effect is that of Goya's Los Capricchios with dash of the Clint EastwoodS'; although it there is an allegory M' the offing about the grim purposelessness of the humani comedy, it has yet to show a leg; But things quieten down as Mara rides off with El Topo and tells, him that to win her love he will have to track down and kill the tour Masters of the desert. The film begins to play with the kind of paradoxes that Eastern mystics use to ward off their disciples, and people of a loosely religious cast of mind find stimulating. The desert is circular, so El Topo and his, mate (joined mysteriously by a; lesbian huntress in black leather) travel in a spiral towards the centre. All of the Masters could triumph but they allow El Topo to kill them, since by rising he will fall towards humility and selfknowledge. Cosmic symbols litter this inward pilgrimage. A croV perches on the carcase of a white rabbit; a lamb is suddenly' crucified. El Topo is apparently slain by the lady in leather, but, rises again to lead a horde of' cripples and dwarfs out of the sid,e, of a mountain.

Avenger, holy man, clown and martyr, El Topo is played brk Jodorowsky with gusto, as if there

was someone human behind the 'archetypes. He claims that the film can be taken on several levels — Buddhist, Taoist, Western parody and so on — and most of his audience will take him at his word and sit happily in a luminous haze taking up what meanings suit .them like cocktail olives off a tray. El Topo is certainly aimed at those with a head for heights rather than profundities; if films were to be judged by the strength of the effect they have, it would be an unquestionable success. To my mind it takes itself too seriously. Like his earlier film Fando and Lis which I praised on its brief appearance over here nearly two years ago, in its preoccupation with elemental actions ritually performed in a never-never land it reminds one that Jodorowsky's theatrical training was as a mime artist with Marcel Marceau for six years. In Fando and Lis the couple made love in a mudbath; here they make love half-buried in the sand. Nevertheless, to be fair, El Topo is more than a succession of coups de theatre. Forget about the cosmic significance: it is the work of a talented film-maker, and full of memorable scenes.