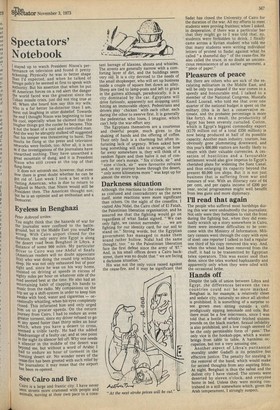 I stayed up to watch President Nixon's per formance on television and found it pretty sickening. Physically he was in better shape than I'd expected, and when he talked of foreign policy he seemed at first to speak with authority. But his assertion that when he put all American forces on a red alert the danger the world faced was the greatest since the Cuban missile crisis, just did not ring true at all. When she heard him say this my wife, Who is a far better lie-detector than I am, burst out laughing in utter disbelief. Towards the end I thought Nixon was beginning to lose his cool, especially when he claimed that the tougher things got the cooler he became. This IS not the boast of a cool and controlled man.

And the way he abruptly stalked off suggested that his temper was threatening to burst. The insults he flung at the press and television networks were foolish, too. After all, it is not as if the investigations of the journalists have unearthed nothing. They have unearthed a great mountain of dung, and it is President Nixon who still crows at the top of that dung-heap. It does not astonish me, however, that even how there is great doubt whether he can be got rid of. Last week I took a bet with a visiting American, who is due to return to England in March, that Nixon would still be , President then. The American thought not; but he is an optimist and an enthusiast and a Oemocrat.

Peter Ackroyd writes: Vou might think that the hazards of war for the journalist were confined to the battleground, but in the Middle East you would"be Wrong. With Cairo airport closed for the duration, the only entry into Egypt is along the desert road from Benghazi in Libya, a distance of some 900 miles. My particular driver to Cairo was one Abdul el Snafu (American readers will no doubt appreciate this) who was doing the round trip without Sleep. He was not only exhausted but of poor Sight and, since he was on his way home, insisted on driving at speeds in excess of eighty miles per hour on whatever side of the road seemed best at the time. He also had an entertaining habit of clapping his hands to music from the radio. My companions on the trip set up a shift-system in order to keep him awake with food, water and cigarettes — occasionally whistling, when his eyes completely closed. This infuriated him and only urged him on to greater speeds. On the return journey from Cairo, I had to endure an even greater torment, since my driver refused to go at any speed faster than thirty miles an hour Which, when you have a desert to cross, seemed a trible tardy. He had the added disadvantage of a faulty car, and at one point in the night its silencer fell off. Why one needs a silencer in the middle of the desert was had me, but without a word of Arabic I nad to endure an hour of torment in the freezing desert air. No wonder news of the cease-fire has been greeted with such relief by the journalists; it may mean that the airport has been re-opened. •

Cairo is a large and frantic city. I have never seen streets more crammed with people and animals, moving at their own pace to a cons tant barrage of klaxons, shouts and whistles. The streets are generally narrow with a comforting layer of dirt, and the buildings seem very old. It is a city devoted to the needs of the small shopkeeper, who will set up business inside a couple of square feet down an alley. Sheep are tied to lamp-posts and left to graze in the gutters although, paradoxically, it is a city dominated by the car. .Egyptians will drive furiously, apparently not stopping until hitting an immovable object. Pedestrians and drivers play ' chicken ' with each other, each daring the other to swerve first. It is generally the pedestrian who loses, I imagine, which can't help the war-effort any.

The Egyptians themselves are a courteous and cheerful people, much given to the shaking of hands and the offering of coffee. Their only fault is a charming but often infuriating lack of urgency. When asked how long something will take to arrange, or how far away somewhere is, they will think of a random figure and then halve it out of concern for one's morale. "Six o'clock, sir" and " nine o'clock, sir" were favourite refrains and, on my journey home through the desert, " only some kilometres more •' was kept up for almost the entire trip.

Although the reactions to the cease-fire were as confused and contradictory as the news itself, some reactions were more significant than others. On the night of the ceasefire, I visited Abu Nidal, the Cairo chief of El Fatah, the Palestinian liberation organisation, and he assured me that the fighting would go on regardless of what Sadat signed. "We can only fight, we cannot surrender . . . we are fighting for our identity card, for our soil to stand on." Strong words, but the Egyptian government has managed to make them sound rather hollow. Nidal had the same thought, too: " so the Palestinian liberation face the first defeat since the army of '67." And, in his small offices down a Cairo backstreet, there was no doubt that " we are facing a darkness situation."

His was not the only voice raised against the cease-fire, and it may be significant that Sadat has closed the University of Cairo for the duration of the war. All my efforts to meet students were proving fruitless; when I asked, in desperation, if there was a particular bar that they might go to I was told that', no, students were forbidden to drink. I finally came across a Syrian student who told me that many students were writing individual letters of protest to Sadat against what he called "a shameful day" of the cease-fire. He also called the truce, in no doubt an unconscious reminiscence of an earlier agreement, a "piece of paper."

But there are others who are sick of the escalating militarism in the Middle East, and will be only too pleased if the war comes to a speedy and honourable end. I talked to a member of the National Congress, Mustafa Kamil Lourad, who told me that over one quarter of the national budget is spent on the military, (this is in fact a conservative estimate, and the probable percentage is more like forty). As a result, the productivity of Egypt has been severely curtailed. Cotton, which is Egypt's biggest commodity export (£170 million out of a total £350 million) is now being produced at half of its possible capacity. Another main industry, tourism, has obviously gone plummeting downward, and this year's 600,000 visitors are hardly likely to return with their valuable currencies. A cessation of hostilities and a favourable settlement would also give impetus to Egypt's cherished plans for widening the Suez Canal, and thus enlarging its capacity beyond the present 60,000 ton ships. But it is not just business that is suffering from war and rumours of war. With an illiteracy rate of 64 per cent, and per capita income of £200 per year, social programmes might well benefit from less guns and more diplomacy.

The people who suffered most hardships during this war were undoubtedly the journalists. Not only were they forbidden to visit the front during the fighting but, when they did eventually scratch up a story somewhere in Cairo, there were immense difficulties to be overcome with the Ministry of Information. Military censors went through the copy with eyes of steel: one reporter I talked to had a regular one third of his copy removed this way. And, when the wheat had been removed from the chaff, it had to be transmitted by Egyptian telex operators. This was easier said than done, since the telex worked haphazardly and apparently only when they were oiled with the occasional bribe.

Despite the talk of union between Libya and Egypt, the differences between the two countries could not be more marked. Benghazi is, for example, a relatively clean and sedate city, naturally so since all alcohol is prohibited. It is something of a surprise to see grown men sitting outside a cafe. prodigiously sipping lemonade and cola. But there must be a few miscreants, since I was told that a bottle of whisky fetched sixteen pounds on the black market, Sexual infidelity is also prohibited, and a low cough seemed to be the only permissible form of 'pass.' The only vice is the hookah-pipe, which a waiter brings from table to table. A harmless occupation, but not a very amusing one.

Another aspect of Libya's puritanical morality under Gadaffi is its primitive 6ut effective justice. The penalty for stealing is the removal of the hand, which would make for second thoughts from any aspiring felon. At night. Benghazi is thus the safest and the dullest city I have visited. The streets were deserted by eleven o'clock, and everyone home in bed. Unless they were mixing contraband in a still somewhere which, given the Arab temperament, I strongly suspect.