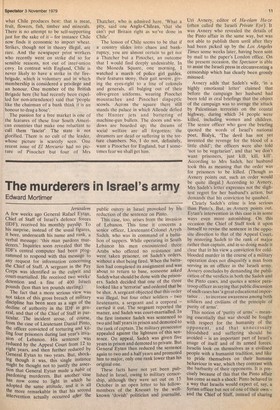 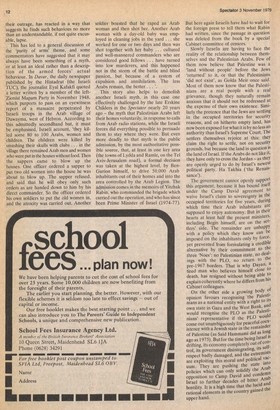 The murderers in Israel's army

Jerusalem A few weeks ago General Rafael Eytan, Chief of Staff of Israel's defence forces (IDF), received his monthly payslip. To his surprise, instead of the usual figures, it bore, underneath his name and rank, a verbal message: 'this man pardons murderers.' Inquiries soon .revealed that the IDF's central computer had been programmed to respond with this message to any request for information concerning the Chief of Staff. A sergeant in the Pay Corps was identified as the culprit and court-martialled. He received two weeks' detention and a fine of 400 Israeli Pounds (less than ten pounds sterling). The fact that a more serious view was not taken of this gross breach of military discipline has been seen as a sign of the decline of authority in the IDF in general, and that of the Chief of Staff in particular. The incident arose, of course, from the case of Lieutenant Daniel Pinto, the officer convicted of torturing and killing four prisoners during last year's invasion of Lebanon. His sentence was reduced by the Appeal Court from 12 to eight years, and then further reduced by General Eytan to two years. But, shocking though it was, this single instance might be thought not to justify the assertion that General Eytan made a habit of Pardoning murderers. But another case has now come to light in which he adopted the same attitude, and it is all the more remarkable in that his second intervention actually occurred after the public outcry in Israel provoked by his reduction of the sentence on Pinto.

This case, too, arises from the invasion of Lebanon. This time it concerns a senior officer, Lieutenant-Colonel Aryeh Sadeh, who was in command of a battalion of sappers. While operating in South Lebanon his men encountered three Arabs who offered no resistance and were taken prisoner, on Sadeh's orders, without a shot being fired. When the battalion had completed its assignment and was about to return to base, someone asked Sadeh what should be done with the prisoners. Sadeh decided that one of the three looked like a 'terrorist' and ordered that he be shot. A sergeant objected that this order was illegal, but four other soldiers — two lieutenants, a sergeant and a corporal — carried it out. The sergeant reported the matter, and Sadeh was court-martialled. In the first instance Sadeh was sentenced to two and half years in prison and demoted to the rank of captain. The military prosecutor appealed against the lightness of this sentence. On appeal, Sadeh was given five years in prison and demoted to private. But General Eytan then reduced the sentence again to two and a half years and promoted him to major, only one rank lower than his original one. These facts have not yet been published in Israel, owing to military censorship, although they were set out on 15 October in an open letter to his fellowmembers of the Knesset by the wellknown 'dovish' politician and journalist, Uri Avnery, editor of Ha-olam Ha-ze (often called the Israeli Private Eye). It was Avnery who revealed the details of the Pinto affair in the same way, but was not able to publish them until after they had been picked up by the Los Angeles Times some weeks later, having been sent by mail to the paper's London office. On the present occasion, the Spectator is able to assist the Israeli press in circumventing a censorship which has clearly been grossly misused.

Avnery adds that Sadeh's wife, 'in a highly emotional letter' claimed that before the campaign her husband had been told in oral briefings that the object of the campaign was to avenge the attack by Palestinian terrorists on the coastal highway, during which 34 people were killed, including women and children. The senior officer who gave the briefing quoted the words of Israel's national poet, Bialyk, 'The devil has not yet invented the revenge for the blood of a little child'; the officers were also told 'not to be vegetarian', and that 'we don't want prisoners, just kill, kill, kill'. According to Mrs Sadeh, her husband took this as meaning that the order was for prisoners to be killed. (Though as Avnery points out, such an order would be quite illegal.) According to Avnery, Mrs Sadeh's letter expresses not the slightest regret for her husband's action, but demands that his conviction be quashed.

Clearly Sadeh's crime is less serious than Pinto's. But, as Avnery points out. Eytan's intervention in this case is in some ways even more astonishing. On this occasion the Chief of Staff took it upon himself to revise the sentence in the opposite direction to that of the Appeal Court; by restoring Sadeh to the rank of major rather than captain, and in so doing made it clear that in his view a conviction for coldblooded murder in the course of a military operation does not disqualify a man from serving as an officer in the Israeli army. Avnery concludes by demanding the publication of the verdicts in both the Sadeh and the Pinto cases, and quotes a senior paratroop officer as saying that public discussion of such cases has 'a great educational importance, . . to increase awareness among both soldiers and civilians of the principle of purity of arms'.

This notion of 'purity of arms' — meaning essentially that war should be fought with respect for the humanity of the Opponent, and that unnecessary bloodshed and suffering should be avoided — is an important part of Israel's image of itself and of its armed forces. Israelis look on themselves as a civilised people with a humanist tradition, and like to pride themselves on their humane behaviour in war, which they contrast with the barbarity of their opponents. It is precisely because of this that the Pinto affair has come as such a shock: Pinto behaved in a way that Israelis would expect of, say, a Syrian officer but not of one of their own — and the Chief of Staff, instead of sharing their outrage, has reacted in a way that suggests he finds such behavious no more than an understandable, if not quite excusable, lapse.

This has led to a general discussion of the 'purity of arms' theme, and some commentators have suggested that it may always have been something of a myth, or at least an ideal rather than a description of the armed forces' actual behaviour. In Davar, the daily newspaper published by the Histadrut (the Israeli TUC), the journalist Eyal Kafakfi quoted a letter written by a member of the leftZionist Mapam Party in November 1948, which purports to pass on an eyewitness report of a massacre perpetrated by Israeli troops in the Arab village of Duwayma, west of Hebron. According to this admittedly secondhand but, it must be emphasised, Israeli account, 'they killed some 80 to 100 Arabs, women and children. The children were killed by smashing their skulls with clubs . . in the village there remained Arab men and women who were put in the houses without food. Then the sappers came to blow up the houses, One officer ordered a sapper to put two old women into the house he was about to blow up. The sapper refused, and said that he will obey only such orders as are handed down to him by his direct commander. So the officer ordered his own soldiers to put the old women in, and the atrocity was carried out. Another soldier boasted that he raped an Arab woman and then shot her. Another Arab woman with a day-old baby was employed in cleaning jobs in the yard ... she worked for one or two days and then was shot together with her baby . . . cultured and well-mannered commanders who are considered good fellows . . . have turned into low murderers, and this happened not in the storm of the battle and blind passion, but because of a system of expulsion and annihilation. The less Arabs remain, the better .

This story also helps to demolish another Israeli myth, in this case one effectively challenged by the late Erskine Childers in the Spectator nearly 20 years ago — the myth that Palestinian Arabs left their homes voluntarily, in response to calls from Arab radio stations, while the Israeli forces did everything possible to persuade them to stay where they were. But even more deadly to that myth is the public admission, by the most authoritative possible source, that, at least in one key area (the towns of Lydda and Ramie, on the Tel Aviv-Jerusalem road), a formal decision was taken at the highest level, by BenGurion himself, to drive 50,000 Arab inhabitants out of their homes and into the area controlled by the Arab Legion. The admission comes in the memoirs of Yitzhak Rabin, who commanded the brigade which carried out the operation, and who has since been Prime Minister of Israel (1974-77). But here again Israelis have had to wait for the foreign press to tell them what Rabin had written, since the passage in question was deleted from the book by a special Cabinet committee of censors.

Slowly Israelis are having to face the reality of the relationship between themselves and the Palestinian Arabs, Few of them now believe that Palestine was a 'land without people' before the Jews 'returned' to it, or that the Palestinians 'did not exist', as Golda Meir once said. Most of them now know that the Palestinians are a real people with a real grievance, though they naturally remain anxious that it should not be redressed at the expense of their own existence. Similarly the pretence that the Jews are settling in the occupied territories for security reasons, and on hitherto empty land, has now been exposed for what it is by no less an authority than Israel's Supreme Court. The settlers themselves rejoice at this: they claim the right to settle, not on securitY grounds, but because the land in question is the land of Israel. If the Arabs do not like it, they have only to cross the Jordan — as they are openly urged to do by Israel's newest political party. Ha Takhia ('the Renaissance'), The government cannot openly support this argument, because it has bound itself under the Camp David agreement to waive Israel's claim to sovereignty in the occupied territories for five years, during which time their Arab inhabitants are supposed to enjoy autonomy. But in their hearts at least half the present ministers, including Begin himself, are on the settlers' side. The remainder are unhapPY with a policy which they know can be imposed on the inhabitants only by force, yet prevented-from' formulating .a credible alternative by their commitment to the three 'Noes': no Palestinian state, no dealings with the PLO, no return to the pre-1967 borders. That is why Dayan, a tired man who believes himself close to death, has resigned without being able to explain coherently where he differs from his Cabinet colleagues. On the other side a growing body of opinion favours recognising the Palestinians as a national entity with a right to its own state in Gaza and the West Bank, and would recognise the PLO as the Palesti nians' representative if the PLO would come out unambiguously for peaceful coexistence with a Jewish state in the remainder of Palestine (as Said Hammami did as long ago as 1975). But for the time being Israel is drifting, its economy completely out of con trol, its government disintegrating, its self respect badly damaged, and the extremists are exploiting this moral and political vac uum. They are pushing the state into policies which can only solidify the Arab opposition to Camp David and condemn Israel to further decades of bitter Arab rhaotsiotinlialty is a menhtsigihn upper hand. ttibmeecothuanttrtyhegaluinceiddatilde pe