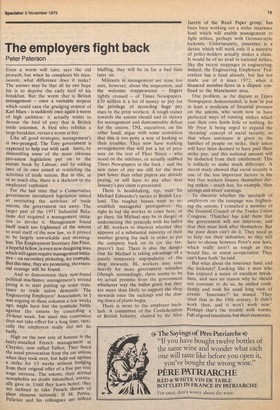 The employers fight back

Even a worm will turn, says the old proverb, but when he completes his manoeuvre, what difference does it make? The answer may be that all he can hope for is to deprive the early bird of his breakfast. But the worm that is British management — once a veritable serpent which could earn the grudging respect of Karl Marx — is suddenly once again a worm of high ambition: it actually wants to devour the bird of prey that is British trade unionism. A bird who relishes a large breakfast, versus a worm at bay.

Like all good strategies, management's IS two-pronged. The Tory government is expected to help out with cash limits, by dismantling some of the more irksome pro-union legislation put on to the statute book by Labour, and by adding laws of its own aimed at restricting the activities of trade unions. But in this, as in so much else, there is a skeleton in the employers' cupboard.

For the last time that a Conservative government introduced legislation aimed at restricting the activities of trade unions, the government ran away. The larger part of the 1971 Industrial Relations Act required a management initiative to invoke it, Management found itself much too frightened of the unions to avail itself of the new law, so it proved to be largely unworkable and meaningless. The Employment Secretary Jim Prior, a hopeful fellow, is even now designing laws which will again require management initiative — on secondary picketing, for example. But this time, they are promising, the essential courage will be found.

And to demonstrate their new-found political machismo, management's second Prong is to start putting up some resistance to trade union demands. The Engineering Employers' Association, as I was arguing in these columns a few weeks ago, might have lost the symbolic battle against the unions by conceding a 39-hour week, but since this concession does not take effect for a long time, tactically the employers really did not do badly.

High on the new role of honour is the lately-installed French management at Chrysler, now called Talbot. They faced the usual provocation from the car unions When they took over, but held out against a strike for 15 weeks without budging from their original offer of a five per cent wage increase. The unions, their normal xenophobia no doubt intensified, eventually gave in. Until they learn better, they are inclined to take French threats of Plant closures seriously. If M. PerrinPelletier and his colleagues are indeed bluffing, they will be in for a bad time later on.

Militants in management are none too sure, however, about the suspension, and the welcome reappearance — fingers tightly crossed — of Times Newspapers. £30 million is a lot of money to pay for the ,privilege of according huge pay rises to the print workers. A tough stance towards the unions should end in victory for management and demonstrable defeat for the unions. TNL executives, on the other hand, argue with some conviction that this is too petty a way of looking at their troubles. They now have working arrangements that will put a lot of pressure on the rest of Fleet Street — who stood on the sidelines, or actually stabbed Times Newspapers in the back — and the new rates of pay are still for the most part lower than other papers are already paying, or will have to pay after next January's pay claim is presented.

There is headshaking, No, over Sir Michael Edwardes's tactics at British Leyland. The tougher bosses want to reestablish managerial prerogatives: the right to bid the worker to come here, or go there. Sir Michael may be in danger of undermining this principle with his ballot of BL workers to discover whether they approve of a substantial minority of their number getting the Sack in order to put the company back on its (or the taxpayers') feet. There is also the danger that Sir Michael is taking advantage of a purely temporary unpopularity of the shop stewards. BL workers may vote heavily for more government subsidies (though, astoundingly, there seems to be no actual promise from the government whichever way the ballot goes) but they are more than likely to support the shop stewards once the sackings and the closing down of plants begin. There is more to the employer backlash. A committee of the Confederation of British Industry, chaired by Sir Alex Jarrett of the Reed Paper group, has been busy working out a strike insurance fund which will enable management to fight strikes, perhaps with German-style lockouts. Unfortunately, insurance is a device which will work only if a minority of policy-holders actually makes a claim. It would be of no avail in national strikes, like the recent stoppages in engineering: indeed, the Engineering Employers' Federation has a fund already, but has not made use of it since 1972, when it financed member-firms in a dispute confined to the Manchester area.

One problem, as the dispute at Times Newspapers demonstrated, is how to put at least a modicum of financial pressure on the unions, who seem now to have perfected ways of running strikes which cost their own funds little or nothing. So Mr Prior is being urged to expand the 'deeming' concept of social security, so that when assistance is given to the families of people on strike, their union will have been deemed to have paid them strike pay, and this notional amount will be deducted from their entitlement This is unlikely to make much difference. A recent study showed that social security is one of the less important factors in the way that workers finance themselves during strikes — much less, for example, than savings and wives' earnings.

To discover whether the spectacle of employers on the rampage was frightening the unions, I consulted a member of the General Council of the Trades Union Congress. 'Thatcher has told them that the government will not intervene, and that they must look after themselves. But the poor dears can't do it. They need us to help run their industries, so they will have to choose between Prior's new laws, which really aren't as tough as they would like, or union co-operation. They can't have both.' he said.

But what about the insurance fund, and the lockouts? Looking like a man who has enjoyed a series of excellent breakfasts, and sees no reason why he should not continue to do so, he smiled confidently and took his usual long view of events. 'Insurance?' he mused. 'They tried that in the 19th century. It didn't work then, and it won't work now.' Perhaps that's the trouble with worms. Full of good intentions, but short memories.