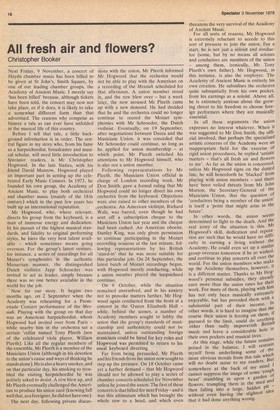 All fresh air and flowers?

Next Friday, 9 November, a concert of Haydn chamber music has been billed to be given at St John's, Smith Square, by one of our leading chamber groups, the Academy of Ancient Music. I merely say 'has been billed' because, although tickets have been sold, the concert may now not take place, or if it does, it is likely to take 'a somewhat different form than that advertised. The reasons why comprise as bizarre a tale as can ever have unfolded in the musical life of this country.

Before I tell that tale, a. little background information is in order. The central figure in my story who, from his fame as a harpsichordist, broadcaster and musical scholar, will need little introduction to Spectator readers, is Mr Christopher Hogwood. In the late Sixties, with his friend David Munrow, Hogwood played an important part in setting up the celebrated Early Music Consort. In 1973, he founded his own group, the Academy of Ancient Music, to play both orchestral and chamber music (mainly of the 18th century) which in the past few years has built up an international reputation.

Mr Hogwood, who, where relevant, directs his group from the keyboard, is a man of immense energy and dedication. In his pursuit of the highest musical standards, and fidelity to original performing styles, he hires the very best talent available — which sometimes means going overseas. For the group's latest venture, for instance, a series of recordings for all Mozart's symphonies in the authentic Mozartian manner, the distinguished Dutch violinist Japp Schroeder was invited to act as leader, simply because there was no one better available in the world for the job.

Now for our story. It begins two months ago, on 2 September when the Academy was rehearsing for a Promenade Concert performance of the Messiah. Playing with the group on that day was an American harpsichordist, whom Hogwood had invited over from Paris — while nearby him in the orchestra sat a certain 'cellist named Tony Pleeth (son of the celebrated viola player, William Pleeth). Like all the regular members of the ensemble, Mr Pleeth is a member of the Musicians Union (although in his devotion to the union's cause and ways of thinking he stands alone). He is also a heavy smoker, and on that particular day, his smoking so troubled the visiting harpsichordist he was politely asked to desist. A row blew up, and Mr Pleeth eventually challenged the American to produce his union card (knowing full well that, as a foreigner, he did not have one).

The next day, following private discus sions with the union, Mr Pleeth informed Mr Hogwood that the orchestra would not be able to play with the American on a recording of the Messiah scheduled for that afternoon. A union member stood in, and the row blew over — but a week later, the now aroused Mr Pleeth came up with a new demand. He had decided that he and the orchestra could no longer continue to record the Mozart symphonies with Mr Schroeder, the Dutch violinist. Eventually, on 19 September, after negotiations between Decca and the Musicians Union, it was conceded that Mr Schroeder could continue, so long as he applied for union membership — at which point, Mr Pleeth switched his attentions to Mr Hogwood himself, who is also not a union member.

Following representations by Mr Pleeth, the Musicians Union official in charge of London recording work, Mr Don Smith, gave a formal ruling that Mr Hogwood could no longer direct his own orchestra from the keyboard. Objections were also raised to other members of the orchestra. An American violinist, Richard Walz, was barred, even though he had sent off a subscription cheque to the Musicians Union last year and the cheque had been cashed. An American oboeist, Stanley King, was only given permission to continue participating in the Mozart recording sessions at the last minute, following representations by his British 'stand-in' that he was more suitable for this particular job. On 24 September, the latest batch of Mozart recordings began, with Hogwood merely conducting, while a union member played the harpsichord continuo.

On 6 October, while the situation remained unresolved, and in his anxiety not to provoke matters further, Mr Hogwood again conducted from the front at a concert in the Queen Elizabeth Hall — while, behind the scenes, a number of Academy members sought to lobby the union that the group's standards of musicianship and authenticity could not be maintained, unless outstanding foreign musicians could be hired for key roles and Hogwood was permitted to return to his usual keyboard directing.

Far from being persuaded, Mr Pleeth and his friends from the union now sought to step up the pressure. On 18 October came yet a further demand — that Mr Hogwood should not be allowed to play a series of chamber concerts scheduled for November unless he joined the union. The first of these concerts is that billed for next Friday — and it was this ultimatum which has brought the whole row to a head, and which even threatens the very survival of the Academy of Ancient Music.

For all sorts of reasons, Mr Hogwood is extremely reluctant to accede to this sort of pressure to join the union. For a start, he is not just a soloist and conductor (some, but by no means all soloists and conductors are members of the union among them, ironically, Mr Tony Pleeth's own father). Mr Hogwood, in this instance, is also the employer. The Academy of Ancient Music is entirely his own creation. He subsidises the orchestra quite substantially from his own pocket, from his earnings as a soloist. Above all, he is extremely anxious about the grow ing threat to his freedom to choose foreign performers where they are musically essential.

In all these arguments the union expresses no interest whatever. When it was suggested to Mr Don Smith, the official involved, that perhaps the specialised artistic concerns of the Academy were an inappropriate field for the exercise of rigid union procedures, he replied 'artistic matters — that's all fresh air and flowers to me'. As far as the union is concerned, unless Mr Hogwood signs on the dotted line, he will henceforth be 'blacked' from playing with union members — and there have been veiled threats from Mr John Morton, the Secretary-General of the Musicians Union, that the question of 'conductors being a member of the union is itself a 'point that might arise in the future'.

In other words, the union seems determined to fight to the death. And the real irony of the situation is this. Mr Hogwood's skill, dedication and reputation are such that he would have no difficulty in earning a living without the Academy. He could even set up a similar group overseas tomorrow if he so wished, and continue to play concerts all over the world. For the union members who make up the Academy themselves, however, it is a different matter. Thanks to Mr Hogwood's personal subsidies, they alreadY earn more than the union rates for their work. For many of them, playing with him has not only been musically extremely enjoyable, but has provided them with a substantial part of their income. 111 other words, it is hard to imagine that the, course their union is forcing on them, Ir pursued to the limit, could do anything other than sadly impoverish British music and leave a considerable hole in their own pockets and musical lives. At this stage, while the future remains poised in the balance, I will restrain the myself from underlining some of more obvious morals from this tale which, will no doubt occur to my readers. Bo' somewhere at the back of my mind I cannot suppress the image of some `rough, beast' stumbling in upon a garden 01. flowers, trampling them in the mud ad then falling into a large, hidden p!t — dea without even having the slightest i that it had done anything wrong.