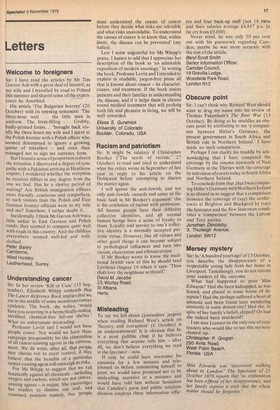 Sir: It might be salutary if Christopher Booker (`The seeds of racism,' 27 October) re-read and tried to understand what his critics wrote in September of last year in reply to his article on the Holocaust before attempting to discuss the matter again.

I will ignore the anti-Jewish, and not only anti-Jewish, canards and come to the basic fault in Mr Booker's argument: this is the confusion of racism with patriotism. All human groups have their different collective identities, and all normal human beings have a sense of loyalty to them. Loyalty and service to one's collective identity is a normally accepted patriotic virtue. However, like all virtues and other good things it can become subject to pathological influences and turn into racism, chauvinism and ethnocentrism. If Mr Booker wants to know the traditional Jewish view of this he should read Leviticus chapter 19 where it says: 'Thou shalt love thy neighbour as thyself.'