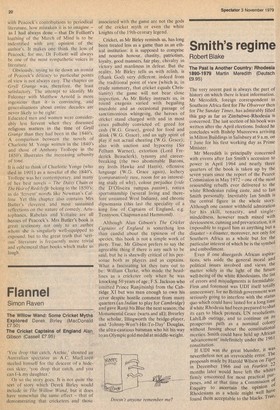 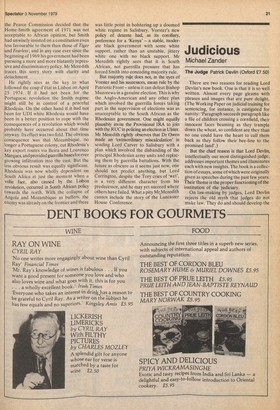 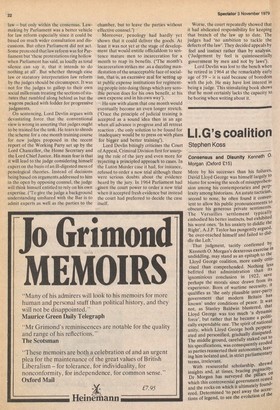 The very recent past is always the part of history on which there is least information. Mr Meredith, foreign correspondent in Southern Africa first for The Observer then for The Sunday Times, has admirably filled this gap as far as Zimbabwe-Rhodesia is concerned. The last section of his book was written after the April elections. Indeed he concludes with Bisheitp Muzorewa arriving in Milton Buildings in Salisbury at 9 a.m. on 1 June for his first working day as Prime Minister.

Mr Meredith is principally concerned with events after Ian Smith's accession to power in April 1964 and nearly three quarters of the book is taken up by the seven years since the report of the Pearce Commission in May 1972 —one of the most resounding rebuffs ever delivered to the white Rhodesian ruling caste, and to Ian Smith personally. Inevitably Ian Smith is the central figure in the whole story. Although one cannot withhold admiration for his skill, tenacity, and singlemindedness, however much mixed with deviousness, cunning and prevarication, it is impossible to regard him as anything but a disaster — a disaster, moreover, not only for Southern Africa as a whole but for the particular interest of which he is the symbol and embodiment.

Even if one disregards African aspirations, sets aside the general moral and political issues involved and views the matter solely in the light of the future well-being of the white Rhodesians, the list of errors and misjudgments is formidable. First and foremost was UDI itself totally unnecessary, for no British government Was seriously going to interfere with the status quo which could have lasted for a long time if white Rhodesia had been prepared to shut its ears to black protests, UN resolutions, Lab/Lib Outrage, and to continue on its prosperous path as a nominal colony without fussing about the constitutional niceties. Smith could have held up African 'advancement' indefinitely under the 1961 constitution. ui tut If p as the great blunder, it was nevertheless not an irrevocable error. The proposals made by Harold Wilson on Tiger in December 1966 and on Fearless 22 months later would have left the vvhites firmly ensconced for most practical Pur:, poses, and at that time a Commission 0, Enquiry to ascertain the opinion of Rhodesians as a whole might well have found them acceptable to the blacks. True' the Pearce Commission decided that the Home-Smith agreement of 1971 was not acceptable to African opinion, but Smith had unwisely insisted on a constitution even less favourable to them than those of Tiger and Fearless; and in any case ever since the beginning of 1969 his government had been pursuing a more and more blatantly repressive and discriminatory policy. Mr Meredith traces this sorry story with clarity and detachment.

He rightly sees as the key to what followed the coup d'etat in Lisbon on April 25 1974. If it had not been for the Portuguese revolution the Smith regime might still be in control of a peaceful Rhodesia. On the other hand if it had not been for UDI white Rhodesia would have been in a better position to cope with the consequences of a revolution which would probably have occurred about that time anyway. Its effect was two fold. The obvious consequence was that Mozambique, no longer a Portuguese colony, cut Rhodesia's key export routes via Beira and Lourenco Marques, and provided guerrilla bases for ever growing infiltration into the east. But the less obvious result was equally significant. Rhodesia was now wholly dependent on South Africa at just the moment when a volte face, also caused by the 1-isbon revolution, occurred in South African policy towards the north. With the collapse of Angola and Mozambique as buffers, the enemy was already on the frontier and there was little point in bolstering up a doomed white regime in Salisbury. Vorster's new policy of detente had, as its corollary, preference for a 'Kenya' — a stable, moderate black government with some white support, rather than an unstable, jittery white one with no black support. Mr Meredith rightly sees that it is South African, not guerrilla pressure that has forced Smith into conceding majority rule.

But majority ruje does not, in the eyes of Vorster and his successors, mean rule by the Patriotic Front — unless it can defeat Bishop Muzorewa in a genuine election. This is why the Anglo-American and any other plan which involved the guerrilla forces taking part in the supervision of elections was as unacceptable to the South African as the Rhodesian government, One might equally plausibly invite the Provisional IRA to join with the RUC in policing an election in Ulster, Mr Meredith rightly observes that Dr Owen made an 'extraordinary miscalculation' in sending Lord Carver to Salisbury with a plan which involved the disbanding of the principal Rhodesian army units and replacing them by guerrilla battalions. With the future as obscure as it seems just now, one should not predict anything, but Lord Carrington, despite the Tory cries of 'wet', is a very different character from his predecessor, and he may yet succeed where others have failed. What a pity Mr,Meredith cannot include the story of the Lancaster House Conference.

The Judge Patrick Devlin (Oxford £7.50) There are two reasons for reading Lord Devlin's new book. One is that it is so well written. Almost every page gleams with phrases and images that are pure delight. (The Working Paper on judicial training for sentencing, for instance, is castigated for naivity: 'Paragraph succeeds paragraph like a file of children crossing a cornfield, their innocent faces beaming as they trample down the wheat, so confident are they than no one could have the heart to call them back as they follow their bee-line to the promised land'.) But the chief reason is that Lord Devlin, intellectually our most distinguished judge, addresses important themes and illuminates each with new insights. The book is a collection of essays, some of which were originally given as speeches during the past few years. Their theme is the proper functioning of the institution of the judiciary.

On law-making by judges, Lord Devlin rejects the old myth that judges do not make law. They do and should develop the law — but only within the consensus. Lawmaking by Parliament was a better vehicle for law reform especially since it could be based on much wider consultation and discussions. But often Parliament did not act. Some protested that law reform was for Parliament but 'these protestations ring hollow when Parliament has said, as loudly as total silence can say it, that it intends to do nothing at all'. But whether through case law or statutory interpretation law reform by the judges should be circumspect. It was not for the judges to gallop to their own social millenium treating the sections of statutes that rumbled along behind as but the wagons packed with fodder for progressive judgments.

On sentencing, Lord Devlin argues with devastating force that the conventional view is wrong in asserting that judges ought to be trained for the task. He tears to shreds the scheme for a one month training course for new judges proposed in the recent report of the Working Party set up by the Lord Chancellor, the Home Secretary and the Lord Chief Justice. His main fear is that it will lead to the judge considering himself expert on the basis of an ill-digested mess of penological theories. Instead of decisions being based on arguments addressed to him in the open by opposing counsel, the judge will think himself entitled to rely on his own expertise. (`To give the judge a background understanding unshared with the Bar is to admit experts as well as the parties to the chamber, but to leave the parties without effective counsel.') Moreover, penology had hardly yet shown that it could deliver the goods. At least it was not yet at the stare of development that would entitle officialdom to sentence mature men to incarceration for a month to reap its benefits. (`The month's incarceration strikes me .as a dazzling manifestation of the unacceptable face of socialism, that is, an excessive zeal for setting up at public expense institutions for regimenting people into doing things which any sensible person does for his own benefit, at his own expense and in his own way').

He saw with alarm that one month would eventually become an even longer stretch. ('Once the principle of judicial training is accepted as a sound idea then in an age when all advance is progress and all retreat reaction , the only solution to be found for inadequacy would be to press on with plans for bigger and better training).

Lord Devlin bitingly criticises the Court of Appeal, Criminal Division first for usurping the role of the jury and even more for rejecting a principled approach to cases. In the Luton Murder case it had, for instance, refused to order a new trial although there were serious doubts about the evidence heard by the jury. In 1964 Parliament had given the court power to order a new trial when it accepted fresh evidence but instead the court had preferred to decide the case itself. Worse, the court repeatedly showed that it had abdicated responsibility for keeping that branch of the law up to date. The judges had `no ambition to tackle the defects of the law'. They decided appeals by feel and instinct rather than by analysis. (`Judgement by feel is quintessentially government by men and not by laws').

Lord Devlin was lost to the bench when he retired in 1964 at the remarkably early age of 59 — it is said because of boredom with the job. He may have lost interest in being a judge. This stimulating book shows that he most certainly lacks the capacity to be boring when writing about it.