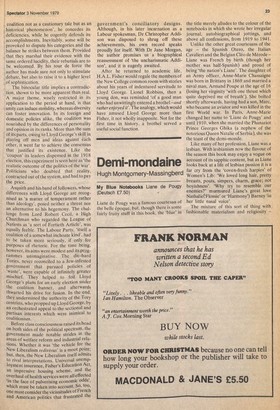 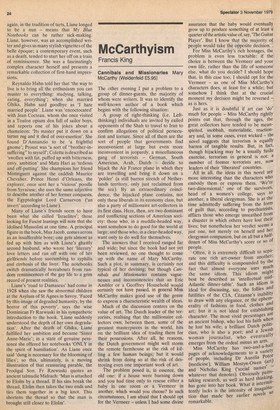 My Blue Notebooks Liane de Pougy (Deutsch £7.50) Liane de Pougy was a famous courtesan of the belle époque, but, though there is some fairly fruity stuff in this book, the 'blue' in the title merely alludes to the colour of the notebooks in which she wrote her irregular journal, autobiographical jottings, and above all confessions, from 1919 to 1941.

Unlike the other great courtesans of the age — the Spanish Otero, the Italian Cavalieri and the Belgian Cleo de Merode — Liane was French by birth (though her mother was half-Spanish) and proud of being 'the nation's Liane'. The daughter of an Army officer, Anne-Marie Chassaigne was born in Brittany in 1869 and married a naval man, Armand Poupe at the age of 16 (losing her virginity 'with one thrust which quite deprived me of breath'). She bolted shortly afterwards, having had a son, Marc, who became an aviator and was killed in the first World war. In Paris, Anne-Marie changed her name to 'Liane de Pougy' and until 1910, when she married the Phanariot Prince Georges Ghika (a nephew of the notorious Queen Natalie of Serbia), she was the toast of the demi-monde.

Like many of her profession, Liane was a lesbian. With lesbianism now the flavour of the season this book may enjoy a vogue on account of its sapphic content, but as Liane looks back at a life of lesbian passion it is a far cry from the 'coven-fresh harpies' of Women's Lib: 'We loved long hair, pretty breasts, pouts, simpers, charm, grace; not boyishness'. 'Why try to resemble our enemies?' murmured Liane's great love Nathalie(`Flossie' or 'Harmony') Barney 'in her little nasal voice'.

The mixture of this sort of thing with, fashionable materialism and religiosity — again, in the tradition of tarts, Liane longed to be a nun — means that My Blue Notebooks can be rather sick-making. Liane, however, was an accomplished writer and gives us many stylish vignettes of the belle époque; a contemporary event, such as a death, tended to start her off on a train of reminiscence. She was a fascinatingly complex character herself and presents a remarkable collection of first-hand impressions.

Reynaldo Hahn told her that 'the way to live is to bring all the enthusiasm you can muster to everything: studying, talking, eating, everything'; when she married Ghika, Hahn said goodbye as 'I hate married people'. Liane was 'encoctocated' with Jean Cocteau, whom she once visited in a Toulon opium den full of sailor boys, and reports one of his jokes about a chameleon: 'Its master put it down on a tartan rug and it died of over-exertion'. She found D'Annunzio to be 'a frightful gnome'; Proust was 'a sort of "brother-insuffering" to myself; Colette is described as 'swollen with fat, puffed up with bitterness, envy, ambition' and Mata Hari as 'tedious and off-putting'. She champions her friend Mistinguett against the caddish Maurice Chevalier. Prince Henri d'Orleans, the explorer, once sent her a 'vicious' poodle from Syracuse; she uses the same adjective to describe another of her former conquests, the Egyptologist Lord Carnarvon Can invert' according to Liane).

Many of Liane's friends seem to have been what she called 'Israelites'; those looking for Fascist leanings will note that she idolised Mussolini at one time A principal figure in the book, Max Jacob, comes across as an insufferable bore; one gets almost as fed up with him as with Liane's ghastly second husband, who wrote her 'literary' love letters and ran off with one of her girlfriends before succumbing to syphilis and cirrhosis of the liver. The notebooks switch dramatically hereabouts from random reminiscences of the gay life to a grim record of present realities.

Liane's 'road to Damascus' had come in 1928 when she saw the abnormal children at the Asylum of St Agnes in Savoy. 'Faced by this image of degraded humanity, by the horror of this poverty', says the wise Dominican Fr Rzewuski in his sympathetic introduction to the book, `Liane suddenly understood the depth of her own degradation'. After the death of Ghika, Liane fulfilled her ambition and became 'Sister Anne-Marie'; in a state of genuine penitence she offered her notebooks 'ONLY in the spirit of humiliation'. As Liane once said 'dung is necessary for the blooming of lilies'; so this, ultimately, is a moving illustration of that reassuring parable, the Prodigal Son. Fr Rzewuski quotes an ancient talmudic Midrach; 'Man is attached to Eloim by a thread. If his sins break the thread, Eloim then takes the two ends and ties them together in a big knot. This shortens the thread so that the man is brought still closer to Eloim'.