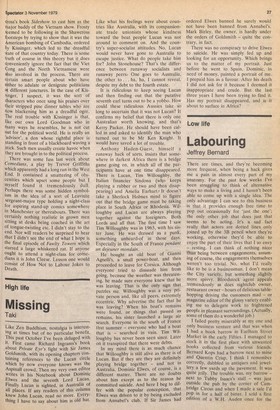 Like Zen Buddhism, nostalgia is interesting at times but of no particular benefit. This past October I've been deluged with it. First came Richard Ingrams's book about Private Eye's fight with Sir James Goldsmith, with its opening chapters contaming references to the Lucan circle which by now everyone knows was the Aspinall crowd. Then my very own editor writes in his Notebook about Dominic Elwes and the seventh Lord Lucan. Finally Lucan is sighted, in Australia of all places. If any readers of this column knew John Lucan, read no more. Everything I have to say about him is old hat. Like what his feelings were about countries like Australia, with its compassionate trade unionists whose kindness toward the boat people Lucan was not around to comment on. And the country's super-socialist attitudes. No, Lucan would never have gone to Australia to escape justice. What do people take him for? John Stonehouse? That's the difference between runaway socialists and runaway peers: One goes to Australia, the other. to ... ha, ha, I cannot reveal, despite my debt to the fourth estate.

It is ridiculous to keep seeing Lucan and then finding out that the putative seventh earl turns out to be a yobbo. How could these ridiculous Aussies take so long to ascertain that it was not Lucan? It confirms my belief that there is only one Australian worth knowing, and that's Kerry Packer. He should have been called in and asked to identify the man who turned out to be Mr Ken Knight. It would have saved a lot of trouble.

Anthony Haden-Guest, himself a runaway hack of sorts, insists that somewhere in darkest Africa there is a bridge game going on, in which all of the participants have at one time disappeared. There is Lucan, Tim Willoughby, the Italian financier Sindona (who keeps playing a rubber or two and then disappearing) and Amelia Earhart., It doesn't take a Sherlock Holmes mind to figure out that the bridge game must be taking place in South Africa or Rhodesia. Willoughby and Lucan are always playing together against the foreigners. Both Lords and all that. The first time I saw Tim Willoughby was in 1963, with his sister Jane. He was dressed as a punk, something unheard-of in those days. Especially in the South of France pendant un dejeuner mondain. He bought an old boat of Gianni Agnelli's, a small power-boat, and then proceeded to leave for Corsica. Although everyone tried to dissuade him from going, because the weather was threatening, he made sure everyone knew that he was leaving. That is the only sign that puzzles me. Willoughby was a very private person and, like all peers, extremely eccentric. Why advertise the fact that he was leaving? When his boat's remains were found, or things that passed as remains, his sister launched a large air search. Everyone in the south of France that summer — everyone who had a boat that is — searched in vain. Tim Willoughby has never been seen since. Later on it transpired that there were debts. In my mind there is as much chance that Willoughby is still alive as there is of Lucan. But if they are they are definitely playing bridge together — and not in Australia. Dominic Elwes, of course, is a different matter. There are no doubts about him except as to the reason he committed suicide. And here I beg to differ with the popular conception, that Elwes was driven to it by being excluded from Annabel's club. If Sir James had ordered Elwes banned he surely would not have been banned from Annabel's. Mark Birley, the owner, is hardly under the orders of Goldsmith — quite the contrary, in fact.

There was no conspiracy to drive Elwes to suicide. He was simply fed up and looking for an opportunity. Which brings us to the matter of my portrait. Just before he went to Spain, Dominic, in need of money, painted a portrait of me. I prepaid him as a favour. After his death I did not ask for it because I deemed it inappropriate and crude. But the last three years I have been trying to find it. Has my portrait disappeared, and is it about to surface in Africa?