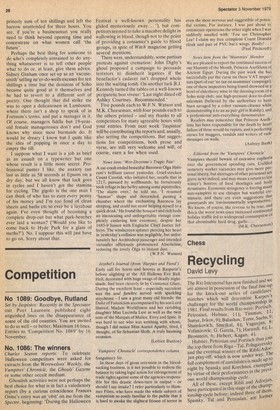 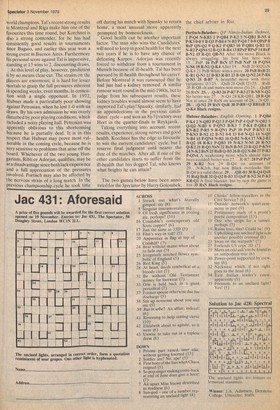 The Rio Interzonal has now finished and we are almost in possession of the final line-up for the knock-out series of candidates matches which will determine Karpov's challenger for the world championship 1981. Final results from Rio were: Portisch, Petrosian, Hubner, 11i; Timman, 11; Sunye, Ivkov, 9; Sal ashov, Torre, Sachs, 9; Shamkovich, Smejkal, Vaganjan, 8; Velimirovic, G. Garcia, 7; Harandi, L.

Bronstein, 6; Hebert, Kagan, 4. Hubner, Petrosian and Portisch thus join the top three from Riga -Tal, PolugayevskY and the eventual winner of the Ribli/Adorjan play-off, which is now under way. The full complement of candidates is made up to eight by Spassky and Korchnoi, exempted. by virtue of their performances in the previous world championship cycle. All of these, except Ribli and MOTiall, have participated in this stage of the championship cycle before; indeed three of them. Spassky. Tal and Petrosian,' are former world champions. Tal's recent strong results in Montreal and Riga make him one of the favourites this time round, but Korchnoi is also a strong contender, for he has had consistently good results in tournaments since Baguio, and earlier this year won a strong event in Buenos Aires. Furthermore his personal score against Tat is impressive, standing at 13 wins to 2, discounting draws.

At this level of play, however, prediction is by no means clear-cut. The strains on the Players are enormous; it is hard for lesser mortals to grasp the full pressures inherent in spending weeks, even months, in contention with a single opponent. In 1972, Hubner made a particularly poor showing against Petrosian, when he lost 1-0 with six draws. By his own admission he was overly disturbed by poor playing conditions, which included a noisy playing hall. Petrosian was apprently oblivious to this shortcoming because he is partially deaf. It is in this respect that Hubner may prove most vulnerable in the coming cycle, because he is very sensitive to problems that arise off the board. Whichever of the two young Hungarians, Ribli or Adorjan, qualifies, may be at a disadvantage since both lack experience and a full appreciation of the pressures involved. Portisch may also be affected by the nervous strain of a long match. In the previous championship eycle he took time off during his match with Spassky to return home, a most unusual move apparently prompted by homesickness.

Good health can be another important factor. The man who wins the Candidates' will need to keep in good health for the next two years if he is to have any chance of defeating Karpov. Adorjan was recently forced to withdraw from a tournament in Munich because of ill-health. Tat has been pursued by ill-health throughout his career. Before Montreal it was rumoured that he had just had a kidney removed. A similar rumour went round in the mid-1960s, but to judge from his subsequent results, these kidney troubles would almost seem to have improved Tal's play! Spassky, similarly. had an appendectomy in the previous candidates' cycle— and won an 8i-71 victory over Hort in the quarter-finals in Reykjavik.

Taking everything into account. recent results, experience, strong nerves and good health, Korchnoi has the edge as favourite to win the current candidates' cycle. but I reserve final judgment until nearer the date of the matches. After all, if one of the other candidates starts to suffer from the ill-health that has dogged Tal, who knows what heights he can attain?

The two games below have been annotated for the Spectator by Harry Golombek, the chief arbiter in Rio.