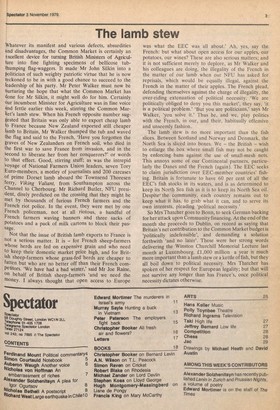 Whatever its manifest and various defects, absurdities and disadvantages, the Common Market is certainly an excellent device for turning British Ministers of Agriculture into fine fighting specimens of bellicose tubthumping flag-waggers. It made Mr John Silkin into a politician of such weighty patriotic virtue that he is now reckoned to be in with a good chance to succeed to the leadership of his party. Mr Peter Walker must now be nurturing the hope that what the Common Market has done for Mr Silkin, it might well do for him. Certainly Our incumbent Minister for Agriculture was in fine voice and fettle earlier this week, stirring the Common Market's lamb stew. When his French opposite number suggested that Britain was only able to export cheap lamb to France because New Zealand exported still cheaper lamb to Britain, Mr Walker thumped the tub and waved the flag and said to the French, 'Have you forgotten the graves of New Zealanders on French soil, who died in the first war to save France from invasion, and in the second to liberate her from her conquerors?' or words to that effect. Good, stirring stuff; as was the intrepid voyage of National Farmers Union leaders, seven Tory Euro-members, a motley of journalists and 200 carcases of prime Dorset lamb aboard the Townsend Thoresen ferry, Viking Valiant, from Southampton across the Channel to Cherbourg. Mr Richard Butler, NFU president, direly predicted on the crossing that they might be met by thousands of furious French farmers and the French riot police. In the event, they were met by one French policeman, not at all riotous, a handful of French farmers waving banners abd three sacks of Potatoes and a pack of milk cartons to block their passage.

Not that the issue of British lamb exports to France is not a serious matter. It is — for French sheep-farmers Whose herds are fed on expensive grain and who need to keep their domestic market price high, and for British sheep-farmers whose grass-fed herds are cheaper to fatten but who are no better off than their French competitors. 'We have had a bad winter,' said Mr Joe Raine, on behalf of British sheep-farmers 'and we need the money. I always thought that open access to Europe was what the EEC was all about.' Ah, yes, say the French: but what about open access for our apples, our potatoes, our wines? These are also serious matters; and it is not sufficient merely to deplore, as Mr Walker and his colleagues are doing, the illegality of the French in the matter of our lamb when our NFU has asked for reprisals, which would be equally illegal, against the French in the matter of their apples. The French plead, defending themselves against the charge of illegality, the over-riding extenuation of political necessity. 'We are politically obliged to deny you this market', they say, 'it is a political problem.' But you are politicians,' says Mr Walker, 'you solve it.' Thus he, and we, play politics with the French, in our, and their, habitually offensive and unseemly fashion.

The lamb stew is no more important than the fish slices. Between Scotland and Norway and Denmark, the North Sea is sliced into boxes. We — the British — wish to enlarge the box where small fish may not be caught by enforcing bans against the use of small-mesh nets. This annoys some of our Continental .partners, particularly the Danes and the French (again). The EEC seeks to claim jurisdiction over EEC-member countries' fishing. Britain is fortunate to have 60 per cent of all the EEC's fish stocks in its waters, and is as determined to keep its North Sea fish as it is to keep its North Sea oil. Despite the community, each country remains out to keep what it has, to grab what it can, and to serve its own interests, pleading 'political necessity.'

So Mrs Thatcher goes to Bonn, to seek German backing for her attack upon Community financing. At the end of the month she proceeds to Dublin, on record as saying that Britain's net contribution to the Common Market budget is 'politically indefensible', and demanding a solution , forthwith 'and no later'. These were her strong words delivering the Winston Churchill Memorial Lecture last month at Luxembourg. £1,000 million a year is much more important than a lamb stew or a kettle of fish, but they all boil down to political necessity. Mrs Thatcher has spoken of her respect for European legality; but that will not survive any longer than has France's, once political necessity dictates otherwise.