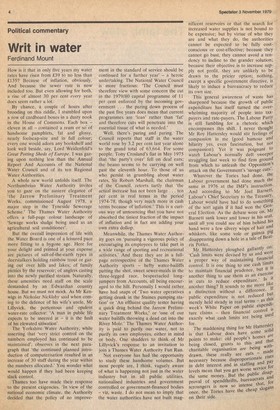 How is it that in only five years my water rates have risen from £39 to no less than £135? Because of inflation, obviously. And because the sewer rate is now included too. But even allowing for both, a rise of almost 30 per cent every year does seem rather a lot.

By chance, a couple of hours after brooding on this riddle, 1 stumbled upon a row of cardboard boxes in a dusty nook in the House of Commons. Each box — eleven in all — contained a ream or s6 of handsome pamphlets, fat and glossy, nearly foolscap-size and in full colour; every one would adorn any bookshelf and look well beside, say, Lord Weidenfeld's Great Potting Sheds of Europe. I was gazing upon nothing less than the Annual Report And Accounts of the National Water Council and of its ten Regional Water Authorities.

A whole new world unfolds itself. The Northumbrian Water Authority invites you to gaze on the austere elegance of 'the Jarrow Preliminary Treatment Works, commissioned August 1978, a major step in the Tyneside Sewerage Scheme.' The Thames Water Authority offers a full-page colour landscape of 'Sewage works sludge being used as an agricultural soil conditioner'.

But the overall impression of life with the Water Board is one of a leisured pace more fitting to a bygone age. Here for your delight and printed at your expense are pictures of salt-of-the-earth types in deerstalkers holding rainbOw trout or gazing out over hills and lakes; of family picnics by the reservoir; of anglers casting into the newly purified stream. Naturally, these amenities need staff on the scale demanded by an Edwardian country house. But we must not mock. As Mr Kenwigs in Nicholas Nickleby said when coming to the defence of his wife's uncle, Mr Lillyvick, the portentous and opulent water-rate collector: 'A man in public life expects to be sneered at — it is the fault of his elewated sitiwation'.

The Yorkshire Water Authority, while asserting that 'very strict control on the numbers employed has continued to be maintained', observes in the next paragraph that 'the continued planned introduction of computerisation resulted in an increase of 30 staff during the year within the numbers allocated.' You wonder what would happen if they had been keeping slack control.

Thames too have made their response to the present exigencies. 'In view of the national economic climate, the Authority decided that the policy of no improve ment in the standard of service should be continued for a further year' — a heroic undertaking. The National Water Council is more fractious: The Council must therefore view with some concern the cut in the 1979/80 capital programme of 11 per cent enforced by the incoming gov ernment the paring down process of the past five years does mean that current programmes are 'lean' rather than 'fat' and therefore cuts will penetrate into the essential tissue of what is needed.'

Well, there's paring and paring. The Council reports that staff in the water world rose by 3.2 per cent last year alone to the grand total of 63,664. For some people, Tony Crosland's fiat in May 1975 that 'the party's over' fell on deaf ears; the beano seems to be carrying on well past the eleventh hour. To those of us who persist in grumbling about water rates, Sir Robert Marshall, the chairman of the Council, retorts tartly that 'the actual increase has not been large ... ten per cent in real terms in the period 1974-78, though very much more in cash terms because of inflation.' This is a curious way of announcing that you have not absorbed the tiniest fraction of the impact of inflation and in fact are adding your own extra dollop.

Meanwhile, the Thames Water Authority goes on 'pursuing a vigorous policy of encouraging its employees to take part in a wide range of sporting and recreational activities.' And there they are in a fullpage retrospective of the Thames Water Authority sports — hefty water-bailiffs putting the shot, sweet sewer-maids in the three-legged race, bespectacled longjumpers from Accounts, all being encouraged to the hilt. Personally I would rather have had snaps of 'Two water operatives getting drunk in the Staines pumping station' or 'An effluent quality tester having a quick drag behind the Jarrow Preliminary Treatment Works,' or 'one of our water bailiffs throwing a dead cat into the River Mole.' The Thames Water Authority is paid to purify our water, not to purify its own employees, either in mind or body. One shudders to think of Mr Lillyvick's response to an invitation to join a Thames Water Authority Fun Run.

Not everyone has had .the opportunity to study these handsome volumes. But most people are, I think, vaguely aware of what is happening not just in the water industry but in all public utilities, nationalised industries and government controlled or government-financed bodies — viz, waste. I do not mean to imply that the water authorities have not built mag nificent reservoirs or that the search for increased water supplies is not bound to be expensive; but by virtue of who they are and what they do, the authorities cannot be expected to be fully costconscious or cost-effective; because they cannot go bust, they cannot avoid a tendency to incline to the grander solution; because their objective is to increase sup ply not profit, they are unlikely to be drawn to the pricier option; nothing, except a specific government directive, is likely to induce a bureaucracy to reduce its own size.

This general awareness of waste has sharpened because the growth of public expenditure has itself turned the overwhelming majority of people into taxpayers and rate-payers. The Labour Party is still fumbling for a rhetoric which encompasses this shift. I never thought Mr Roy Hattersley would stir feelings of compassion in me (good humour and hilarity yes, even fascination, but not compassion). Yet it was poignant to watch Labour's normally deft sweeper struggling last week to find firm ground from which to unleash the Opposition's attack on the Government's 'savage cuts'. Whatever the Tories had done, the Labour government had done much the same in 1976 at the IMF's instruction. And according to Mr Joel Barnett, Labour's Chief Secretary to the Treasury, Labour would have had to do something of the sort again if it had won the General Election. As the debate wore on, Mr Barnett sank lower and lower in his seat, until all you could see of him behind his hand were a few silvery wisps of hair and whiskers, like some vole or guinea Pig disappearing down a hole in a tale of Beatrix Potter. Mr Hattersley ploughed gallantly on: 'Cash limits were devised by us and were a proper way of maintaining financial control. It is one thing to use cash limits to maintain financial prudence, but it is another thing to use them as an exercise in cuts to reduce expenditure.' Is it another thing? It sounds to me more like a distinction without a difference. If public expenditure is not reduced but merely held steady in real terms — as this week's White Paper on public expenditure claims — then financial controls. exactly what cash limits are being used for. The maddening thing for Mr Hattersley is that Labour does have some solid points to make: old people's homes are being closed, . grants to this and that , made necessary organisation are being with drawn, these really are cuts — rnade necessary because disproportionate rises in debt interest and in staffing and P,01 levels mean that you get worse service for the same money. But the disapproval of spendthrifts, bureaucrats that, for and scroungers is now so intense once, the Tories have the cheap slogan' on their side. public