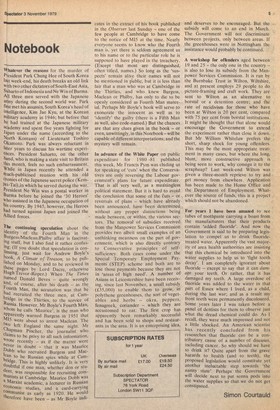 Whatever the reasons for the murder of President Park Chung Hee of South Korea last week-end, his death breaks an old link With two other dictators of South-East Asia, Saharto of Indonesia and Ne Win of Burma. All three men served with the Japanese army during the second world war. Park first met his assassin, South Korea's head of intelligence, Kim Jae Kyu, at the Korean military academy in 1946; but before that he had trained at the Japanese military academy and spent five years fighting for Japan under the name (according to the North Koreans) of Lieutenant Toshiro Okamoto. Park was always reluctant in later years to discuss his wartime experiences. President Suharto, on the other hand, who is making a state visit to Britain this month, feels no such embarrassment. While in Japan recently he attended a Much-publicised reunion with his old Cronies of the Japanese secret police (KemPet-Tai),in which he served during the war. President Ne Win was a postal worker in turma before he joined the '30 Heroes' Who assisted in the Japanese occupation of his country. By 1945, however, the Heroes had turned against Japan and joined the Allied forces.

'!‘lie continuing speculation about the Identity of the Fourth Man in the Burgess/Maclean/Philby affair is fascinating stuff, but I also find it rather confusN. (If you doubt that speculation is continuing, just wait for Andrew Boyle s hook, A Climate of Treason, to be published on Monday, and to be reviewed in these pages by Lord Dacre, otherwise Hugh Trevor-Roper.) When The Times named Donald Beves — quite wrongly !1.51(1, of course, after his death — as the Fourth Man, the accusation was that he had recruited the three men, at Cam-, bridge in the Thirties, to the service of Russia. However, Mr Boyle's Fourth Man, Whom he calls 'Maurice', is the man who aPParently warned Burgess in 1951 that MI5 were about to arrest Maclean. The two left England the same night. Mr Chapman Pincher, the journalist who claims to be privy to all such information, Wrote recently — as if the matter were never in doubt — that it was Maurice bobb who recruited Burgess and Maclean to be Russian spies while at Cambridge. This is highly unlikely. It is very doubtful if one man, whether don or student, was responsible for recruiting comMunists at Cambridge. Maurice Dobb was a Marxist academic, a lecturer in Russian economic studies, and a card-carrying communist as early as 1920. He would. therefore have been — as Mr Boyle indi cates in the extract of his book published in the Observer last Sunday — one of the few people at Cambridge to have come to the notice of MIS at the time. Nearly everyone seems to know who the Fourth man is, yet there is seldom agreement as to his name or to the particular role he is supposed to have played in the treachery. (Except that most are distinguished, often 'titled, names.) So long as the 'suspects' remain alive their names will not be mentioned in public, but it is less than fair that a man who was at Cambridge in the Thirties, and who knew Burgess, Maclean or Philby, has only to die to be openly considered as Fourth Man material. Perhaps Mr Boyle's book will serve to exonerate the innocent as well as to 'identify' the guilty (there is a Fifth Man as well, also code-named.) But the chances are that any clues given in the book — or even, unwittingly, in this Notebook—will be capable of different interpretations; and the mystery will remain.

In advance of the White Paper on public expenditure for 1980 -81 published this week, Mr Francis Pym was chiding us for speaking of 'cuts' when the Conservatives are only reversing the Labour government's plans for future expenditure. That is all very well, as a medningless political statement. But it is hard to avoid the conclusion that some of the tuts — or reversals of plans — which have already been announced, have been determined without any proper distinctions being made between, or within, the various sectors. The removal of subsidies received from the Manpower Services Commission provides two albeit small examples of an unthinking meanness on the part of government, which is also directly contrary to Conservative principles of selfsufficiency. Both cases come under the Special Temporary Employment Payments (STEP) scheme and both are to lose those payments because they are not in 'areas of high need'. A number of Asians in Leicestershire have been receiving, since last November, a small subsidy (£35,000) to enable them to grow, in polythene greenhouses, the sort of vegetables and herbs — okra, peppers, fenugreek, coriander — which they are accustomed to eat. The first crop has apparently been remarkably successful and has been sold to shops and restaurants in the area. It is an enterprising idea and deserves to be encouraged. But the subsidy will come to an end in March. The Government will not discriminate between projects, only between areas. If the greenhouses were in Nottingham the assistance would probably be continued.

A workshop for offenders aged between 19 and 25 — the only one in the country — is also to lose its subsidy from the Manpower Services Commission. It is run by the Burnbake Trust in Wilton, Wiltshire, and at present employs 29 people to do picture-framing and craft work. They are sent to Wilton as an alternative to borstal or a detention centre; and the rate of recidivism for those who have been at Wilton is 20 per cent, compared with 75 per cent from borstal institutions. It might be thought that that alone would encourage the Government to extend the experiment rather than close it down. But Mr William Whitelaw prefers the short, sharp shock for young offenders. This may be the most appropriate treatment in many cases, but where the long, blunt, more constructive approach is being seen to work, why consign it to the scrapheap? Last• week-end Wilton was given a three-month reprieve to try and get money from elsewhere. Application has been made to the Home Office and the Department of Employment. Whatever the source of funds, this is a project which should not be abandoned.

For years I have been amazed to see tubes of toothpaste carrying a boast from the manufacturers that their products contain 'added fluoride'. And now the Government is said to be preparing legislation to compel us to drink fluoridetreated water. Apparently the vast majority of area health authorities are insisting that this chemical be introduced into the water supplies to help us to 'fight tooth decay'. I am completely ignorant about fluoride — except to say that it can damage your teeth. Or rather, that it has damaged my teeth. A large overdose of fluoride was added to the water in that part of Essex where I lived, as a child, during the last war; and as a result my front teeth were permanently discoloured. Some years later I was taken before a panel of dentists for them to observe just what the dread chemical could do. As I recall, they were much impressed and not a little shocked. An American scientist has recently concluded from his researches that fluoride can be a contributory cause of a number of diseases, including cancer. So why should we have to drink it? Quite apart from the grave hazards to health (and to teeth), the proposed legislation would constitute yet another ineluctable step towards 'the nanny state'. Perhaps the Government will decide next to put scnna pods into the water supplies so that we do not get constipated.