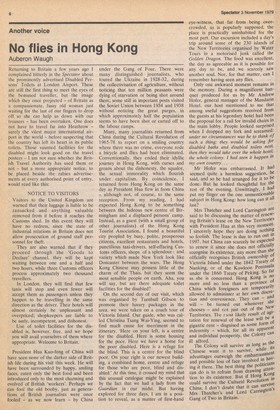 No flies in Hong Kong

Returning to Britain a few years ago I complained bitterly in the Spectator about the prominently advertised Disabled Persons' Toilets at London Airport. These are still the first thing to meet the eyes of the bemused traveller, but the image which they once projected — of Britain as a compassionate, fussy old woman just waiting for the last of our fingers to drop off so she can help us down with our trousers — has been overtaken. One does not have to travel far into Heathrow — surely the vilest major international airport in the world — before suspecting that the country has left its heart in its public toilets. Those vaunted facilities for the disabled might look good on the travel posters — I am not sure whether the British Travel Authority has used them or not — but a more appropriate notice, to be placed beside the rabies advertisements at every authorised point of entry, would read like this: NOTICE TO VISITORS Visitors to the United Kingdom are warned that their luggage is liable to be ransacked and anything valuable removed from it before it reaches the Customs shed. In this event they will have no redress, since the state of industrial relations in Britain does not allow prosecution of ground staff personnel for theft.

They are also warned that if they proceed through the 'Goods to Declare' channel, they will be kept waiting between one and a half and two hours, while three Customs officers process approximately two thousand travellers.

In London, they will find that few taxis will stop and even fewer will accept them as passengers unless they happen to be travelling in the same direction as the driver. Their hotels will almost certainly be unpleasant and overpriced; shopkeepers are liable to be surly, incompetent, and dishonest. Use of toilet facilities for the disabled is, however, free, and we hope you will avail yourselves of them where appropriate. Welcome to Britain.

President Hua Kuo-feng of China will have seen none of the darker side of British life during his visit this week. He will have been surrounded by happy, smiling faces, eaten only the best food and been introduced only to the most charming and evolved of British 'workers'. Perhaps we can fool the old booby, just as generations of British journalists were once fooled — as we now learn — by China under the Gang of Four. There were many distinguished journalists, who toured the Ukraine in 1928-32, during the collectivisation of agriculture, without noticing that ten million peasants were dying of starvation or being shot around them; some still in important posts visited the Soviet Union between 1934 and 1938 without noticing the great purges, in which approximately half the population seems to have been shot or carted off to the labour camps.

Many, many journalists returned from China during the Cultural Revolution of 1965-78 to report on a smiling country where there was no crime, everyone rode a bicycle and flies had been eliminated. Conventionally, they ended their idyllic journey in Hong Kong, with curses and groans about the dishonesty, the squalor, the sexual immorality which flourish under. capitalism. By coincidence, I returned from Hong Kong on the same day as President Hua flew in from China — although not, of course, to the same reception. From my reading, I had expected Hong Kong to be something between the hideous new centre of Birmingham and a displaced persons' camp. Instead, as a guest (with a small group of other journalists) of the Hong Kong Tourist Association, I found a beautiful city peopled by busy, polite, prosperous citizens, excellent restaurants and hotels, punctilious taxi-drivers, self-effacing Customs officers, shops of a splendour , and variety which made New York look like Doncaster between the wars. The Hong Kong Chinese may possess little of the charm of the Thais, but they seem the most sensible people on earth. Aha, you will say, but are there adequate toilet facilities for the disabled?

On the second day of our visit, which was organised by Turnbull Gibson to promote their luxury packages in the area, we were taken on a coach tour of Victoria Island. Our guide, who was called Christina Tsang Wai-Ying, seemed to find much cause for merriment in the itinerary. 'Here on your left, is a centre for the disabled. Here is some housing for the poor. Here we have a home for the poor disabled. Here is a refuge for the blind. This is a centre for the blind poor. On your right is our newest building, a combined home, centre and refuge for those who are poor, blind and disabled.' At this time, it crossed my mind that this unusual catalogue might be explained by the fact that we had a lady from the Guardian in our midst. But having explored for three days, I am in a position to reveal, as a matter of first-hand

Spectator 3 November 1979 eye-witness, that far from being overcrowded, as is popularly supposed, the place is practically uninhabited for the most part. Our excursion included a day's trip around some of the 230 islands of the New Territories organised by Water Tours in a motorised junk called the Golden Dragon. The food was excellent, the day as agreeable as it is possible for any day to be, and we scarcely saw another soul. Nor, for that matter, can I remember having seen any flies.

Only one awkward moment remains in the memory. During a magnificent banquet produced for us by Mr Andrew Hofer, general manager of the Mandarin Hotel, our host mentioned to me that among useful suggestions received from the guests at his legendary hotel had been the proposal for a rail for invalid chairs in the main lobby. People looked surprised when I dropped my fork and screamed: under no circumstances was he to think of such a thing; they would be asking for disabled baths and disabled toilets next, then they would take over the whole hotel,' the whole colony. I had seen it happen in my own country. . . Mr Hofer was embarrassed. It had seemed quite a harmless suggestion, he said, and so he had arranged for it to be done. But he looked thoughtful for the rest of the evening. Unwittingly, had put my finger on the one unmentionable subject in Hong Kong: how long can it all last?

Mrs Thatcher and Lord Carrington are said to be discussing the matter of renewing Britain's lease on the New Territories with President Hua at this very moment. I sincerely hope they are doing nothing so foolish. The lease is due to run out in 1997, but China can scarcely be expected to renew it since she does not officially recognise its existence, any more than she officially recognises British ownership of Victoria Island under the 1842 Treaty of Nanking, or of the Kowloon Peninsula under the 1860 Treaty of Peking. So far as she is concerned. Hong Kong is no more an'd no less than a province of China which foreigners are temporarily allowed to administer at her own discretion and convenience. They can — and will — be turned out whenever she chooses — and not just out of the New• Territories. The r lost likely result of agitation for renewal of the lease will be a,. gigantic rent — disguised as some form or indemnity — which, for all its apparent and individual prosperity, the Colony can ill afford. as the The Colony will survive as long Chinese want it to survive, while its advantages outweigh the embarrassmen and possible loss of face involved in having it there. The best thing the politicians t can do is to refrain from drawing attention to its existence. But if Hong Kirg could survive the Cultural Revolution In China, I don't doubt that it can surviv,e Mrs Thatcher's and Lord Carrington s Gang of Two in Britain.